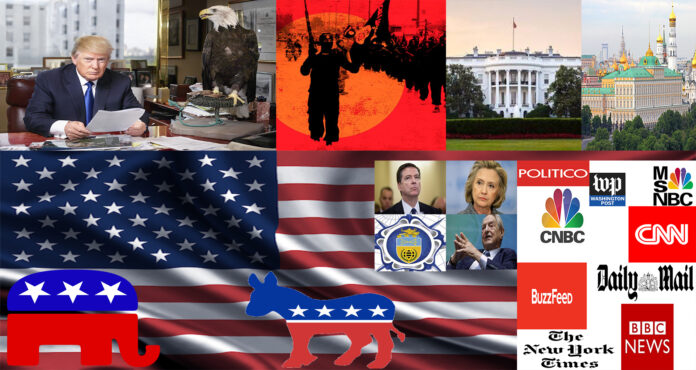 To put it simply, they are trying to shift peoples opinion and support away from the White House administration. They are building “media floor” for possible impeachment of Trump and at the same time running a “non stop” campaign in preparation for next presidential elections that will come in four years. Media is totally neglecting Trump successes that he made on many many many fields please read the article on the link bellow:

RECOVERING THE AMERICAN DREAM AND CHANGE IN GLOBAL AFFAIRS

This is the classic example of Coup d’état in motion

This Russia story is based upon a lie and fiction. This story is so unbelievably  wrong and….wait i do not have a correct word for this …lets say…THIS STORY IS CONSTRUCTED UPON A LIE AND ITS IS A TOTAL BULSHIT AND REPORTING IT IS UTERRLY UNBEALIVABLE BECAUSE THIS IS JUST A  PILE OF GARBAGE … but dangerous pile of garbage! With this story Trump “opposition” is not only undermining White House administration but they are destroying the influence and might of  United States and believe me that is their final intent to destroy the influence of United States. Part of the Elite does not want to see United States strong and independent. The idea is to have United States week and obedient for the “new world order”. They do not want stability at all they want chaos, because from the chaos they will introduce order. “Ordo Ab Chao”  – Let me explain this in just couple of words:

FIRST CREATE A PROBLEM – PRODUCE A REACTION – THEN GIVE A SOLUTION

Cant you see that this is just what is happening right now. For god sake can you see it?!

First they created a problem:

They produced a reaction:

People are stunned and bewildered. America in chaos. Protests rise some of them are paid by notorious corporations and shady influence. People demand a solution.

Then they give you a solution:

The process of impeachment starts. Trump and its administration is presented as a problem and if you remove a problem everything will be fine and stable again. Do you understand?!

If this is allowed to happen the next thing that will happen and that you are going to se is this:

3 – Once again you will react

4 – Solution will be given in the form of new world order … and please do not be delusional  that this is going to be something out of your dreams like Star Trek society of peace prosperity and harmony. No No. It will be the society that you do not want your children to live in. But lets not go that way and towards that outcome. Lets believe in human society and lets continue to fight!

Please visit these articles on links bellow EVERYTHING IS CONNECTED:

US PRESIDENTIAL ELECTIONS FAR MORE IMPORTANT THEN WE ALL PERCEIVE THEM TO BE – BALANCE OR WAR?

HILLARY CLINTON’S CAMPAIGN AGAINST RUSSIA – WHY ?

DONALD TRUMP MUST PERSIST, FUTURE IS AT STAKE – THE CLINTONS AND SOROS LAUNCH AMERICA’S PURPLE REVOLUTION

BREAKING NEWS – MASKS HAVE FALLEN – SHOULD US CONGRESS INTERVENE ON OBAMA WIRETAPPING TRUMP? – WAS THIS A “SILENT COUP” IN THE MAKING?

Lest get back on present moment:

“The FBI is one of our Nation’s most cherished and respected institutions and today will mark a new beginning for our crown jewel of law enforcement,” Trump also said. “James Comey will be replaced by someone who will do a far better job, bringing back the spirit and prestige of the FBI. The Democrats have said some of the worst things about James Comey, including the fact that he should be fired, but now they play so sad! Comey lost the confidence of almost everyone in Washington, Republican and Democrat alike. When things calm down, they will be thanking me! The Russia-Trump collusion story is a total hoax, when will this taxpayer funded charade end? “The White House made the stunning announcement shortly after the FBI corrected a sentence in Comey’s sworn testimony on Capitol Hill last week.

The director told lawmakers that Huma Abedin, when a top aide to Hillary Clinton at the State Department, had sent “hundreds and thousands” of emails to her husband’s laptop, including some with classified information.

On Tuesday, the FBI said in a two-page letter to the Senate Judiciary Committee that only “a small number” of the thousands of emails found on the laptop had been forwarded there while most had simply been backed up from electronic devices.

Most of the email chains on the laptop containing classified information were not the result of forwarding, the FBI said.

Back to Russia story…

Latest news coming from main stream media was that United States president Donald J. Trump shared some classified information with Russian minister Sergei Lavrov when he came to an official visit to Washington.

Yes that meeting happened and Yes Trump shared some information with Russian officials but those where not state secrets and he had every right to do so as a president of the United States. He has promised to end ISIS once and for all and he is just doing what he has promised. What happened next Media attacked him and some of them called for an impeachment.

ISIS a mistake that should be erased

He gave help to Russian to defeat ISIS! SO WHAT? Have media forgot that ISIS is a GLOBAL THREAT and COMMON ENEMY?! Have media forgot that Russia is fighting that evil constantly and is doing tremendous and hard job. No the media have not forgot about that. They now that quite well. Because they sponsors are those who made ISIS in first place. It is their baby! their construct!

WAR IS BUSINESS & BUSINESS IS GOOD

Putin: “We are seeing in the US a developing political schizophrenia,”…”If the US administration deems it possible, we are ready to provide the Senate and Congress with the transcript of the conversation between Lavrov and Trump,”

Basically what Putin said is an absolute truth. This is total political schizophrenia but this situation is not to be underestimated at all. This situation is very dangerous situation for United States and for the World. Please be vigilant share the info and do not give up. It all depends from you. The battle for humanity has begun. The only thing that counts is your free will and choice. The battle for free will of humanity has begun.

ITS ALL UP TO US, DO NOT LET FREEDOM AND LIBERTY TO DIE WITH THUNDEROUS APPLAUSE

They are not the “illuminated” one, WE ARE. HUMANITY IS!

Written by Founder of TBU NEWS Zeljko Mihajlovic
(Please understand that editors native language is not English. We believe that this will not diminish the importance and relevance of this article)