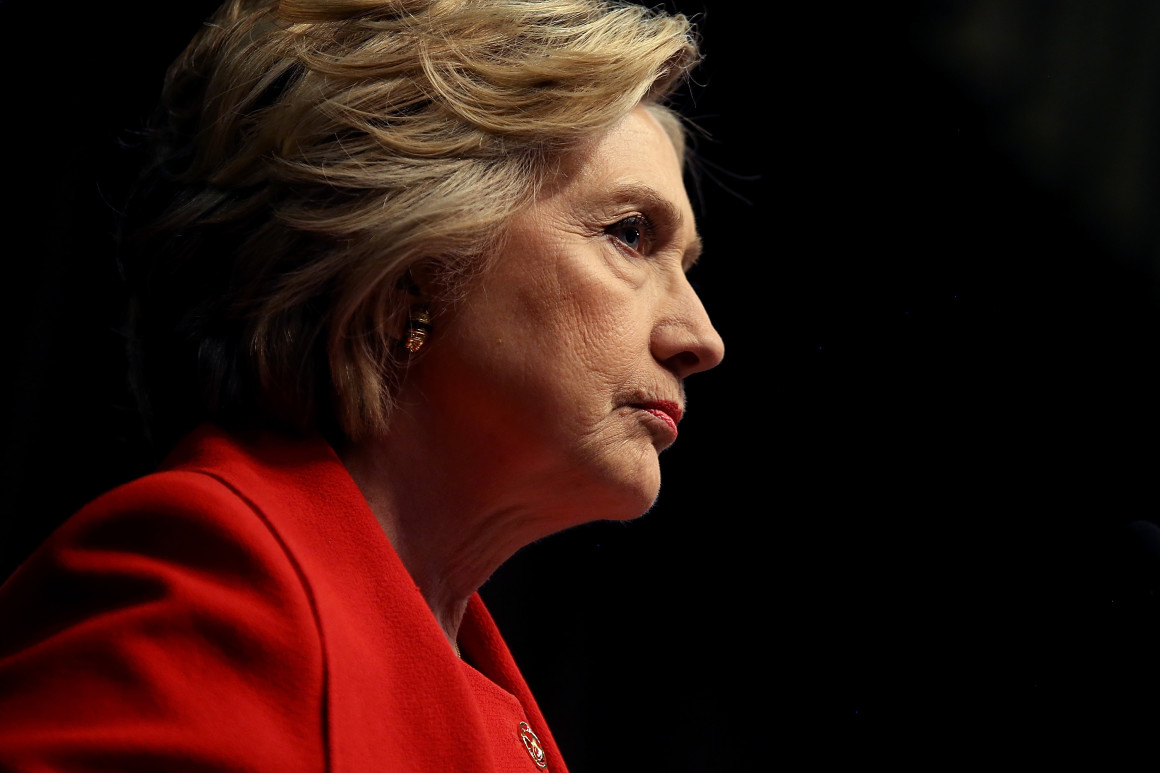 It is a rainbow coalition of everyone she needs on board when she starts bombing Syria—seriously bombing Syria, courageously doing so one-upping Barack Obama (who she thinks blew his opportunities to take out Assad in 2011 and 2013) and producing another regime change accompanied by her triumphant Tarzan yell. This time it will be: “We came, we saw, Syria died!”

Hillary was, you recall, a leading cheerleader of the destruction of the modern Iraqi and Libyan states, and continues to justify those regime-change actions while bemoaning their aftermaths, which she blames on others.

For someone doing so poorly in the polls, and exciting so little enthusiasm—barely edging over a buffoon whose main purpose seems to be to reveal to the world the depths of the U.S. electorate’s abject ignorance and moral depravity—Hillary can boast on the one hand that the Democratic Party platform is the “most progressive” in the party’s history (thanks to the Bernie supporters, whom she regularly acknowledges, pandering with little success); and on the other hand her candidacy is solidly supported by Goldman-Sachs and the neocons and the whole military-industrial complex. From left to right, such a big tent!

Everybody else (especially, we’re supposed to believe, less-educated “middle-class” white men over 40) is for Trump. But (the Hillary camp wants to believe) with such high negatives among blacks, Latinos and women Trump can’t win barring some horrible failure of the good people to go to the polls.

But polls are showing Trump and Clinton neck and neck, or even showing the billionaire leading, including in some key states. This brings out the worst, most dishonest streak in Clinton’s character. Her response indicates that she remains the eternal Goldwater Girl. Running scared, she resorts to the least creative yet tried-and-true ploy imaginable: Cold War-era style redbaiting.

Never mind that there are few Reds in Moscow anymore, and that Russia is a thoroughly capitalist society posing no threat to the U.S.  Never mind that Russia like the U.S. has a multiparty democratic political system (rigged, like that in the U.S.) and like the U.S. is controlled by its billionaire One Percent (that by the way invests heavily in the U.S. and Britain). There is no ideological divide, and Russia does not head an international ideological movement.

The basis for its deteriorating relationship with the U.S. and some of its allies is that Washington has steadily expanded NATO to surround the Russian Federation since 1999 (when during Clinton’s husband Bill’s administration it added Poland, Czechoslovakia, and Hungary); wants to add Georgia and Ukraine to the alliance; and spends billions trying to influence elections or fund movements for regime change such as the one that toppled Ukraine’s elected president Viktor Yanukovych in February 2014.

The U.S. press has virtually ignored one of the most important geopolitical developments of our time. NATO expansion has been a non-story. Russia’s reactions to it (including recent war games held on Russian territory, in response to the biggest NATO war games ever in Poland earlier this year) are invariably depicted as “threatening” to Europe. Vladimir Putin is personally vilified as a brutal dictator who imprisons and assassinates political foes and journalists and has ambitions to restore the Soviet Union.

All of this is accepted without questions by cable anchors, coached no doubt by news editors who shape the packaging of the news. Instead of noting the obvious fact that NATO is by its very expansion provoking Russia, the mainstream press declares with a straight face that Russia is provoking NATO—by opposing its expansion!

The reportage on Ukraine has been particularly bankrupt. Talking heads repeatedly refer to Russian “invasions” of the Donbas region of eastern Ukraine and Crimea that never happened. They methodically avoid discussion of the neo-fascist element in the post-coup regime and how its actions prompted separatism among Russian speakers in the east. Journalists for the top newspapers routinely cite unnamed “government officials” as confirming Russian responsibility for all manner of offenses, from shooting down planes to hacking U.S. emails, blissfully free of any need to provide evidence. This is why polls show Putin the most despised man in the U.S.

The vilification is absurd, especially given the kid gloves treatment of much worse leaders in the U.S. camp. (Turkish President Recep Tayyip Erdogan resembles Putin in many respects but the U.S. press ignores his repression, military aggression, aid to terrorists, and mass detention of journalists.) But the press generally echoes the State Department, to which it is sometimes literally wed (Christiane Amanpour). And the post-Cold War State Department and Pentagon have felt the need to posit a new Enemy in the form of a Russia that threatens its neighbors and (in Syria and elsewhere) supports horrible regimes.

So when Hillary gets scared, she plays the Russia card. Her campaign has been doing it in several ways. It notes that Trump campaign staffers arranged the removal of a call to arm Kiev against separatists in the Republican platform, implying that this shows Trump’s support for Putin’s objectives in Ukraine (rather than, say, a disinclination to exacerbate the conflict and to support the Minsk Agreement).

It notes that former Trump campaign manager Paul Manafort also worked as a campaign advisor and lobbyist for Ukraine’s Yanukovich for over a decade, and implies that this connection explains the platform change. (As though there were something especially nasty about a professional political operative from the U.S. selling his services to a politician who won what everyone acknowledges was a “free” election in Ukraine in 2010. But Yanukovych, because he opposed NATO membership for Ukraine and decided to reject EU membership due to the austerity conditions it would impose on Ukraine, was considered “pro-Russian” by the State Department. Ergo, Manafort must be a Putin agent. Such accusations forced him to resign as campaign manager Aug. 19.)

The campaign responded to the devastating Wikileaks revelation that the DNC rigged the primary process in favor of Clinton against Sanders—a scandal serious enough to result in the resignation of Debbie Wasserman Schultz and other top DNC officials—by blaming the leaks on Russia! Even if someone in that country hacked the accounts announcing to the world how corrupt the U.S. political process is, what should it matter more than if the hacker was a high school kid in Florida? Because, the Clinton campaign echoed by the entire bourgeois media proclaims, Russia is trying to influence our elections!

The media sometimes uses the term “bromance” and posits a soul-mate relationship between the Russian leader, who has in fact never met Trump nor said more than a couple sentences relating to him (in answer to reporters’ questions). He has called him “flamboyant” (which is true), not “brilliant” as the press sometimes reports. It’s common sense to imagine that he prefers Trump to the warmongering Clinton, who wants regime change in Syria, and more NATO expansion, and has preposterously compared Putin to Hitler. But Putin has in fact been diplomatically silent on the U.S. election. (RT TV has contrasted this silence to the active U.S. support for the reelection of Russian president Boris Yeltsin, a total buffoon—opposed by the initially more popular Communist Party leader Gennady Zyuganov—in 1996.)

But Goldwater Girl Hillary wants to make it clear: she is anti-Putin, anti-Russian, while Trump is a Putin fan. (The press refers to Trump’s repeated “praise” for Putin, alluding to his occasional vague comments to the effect that Putin is sharp and popular. But my impression is that his references to Putin are largely allusions to his supposed high estimation of his own narcissistic and solopsistic self. Like the poet Apollinaire, Trump praises all who love him. And he is mercurial. Fawning generals could use these traits to affect his actual policies in power towards Russia. And recall Trump has boasted about being the “most militaristic” of candidates.)

That the first woman president of the U.S. will be elected (as still seems likely, I think, although not with high confidence) might be brought to power by a coalition of self-defined progressives and war criminals like George H. W. Bush, whipped up in part by tired old Russia-baiting, is depressing. It’s depressing that 27 years after the end of the Cold War it’s still possible to exploit a Russian bogeyman to win support for hot war.

That Hillary in power will try (and possibly) succeed in going to war once again, this time targeting Russia or its allies (the Syrian state, the Ukrainian Russian separatists), is frightening.  The electorate is malleable, its collective memory short. What should be universally acknowledged truths (the Iraq War was based on lies, produced horrible death and suffering, generated more terrorism that spread to Syria, etc.) are in fact not grasped adequately by the masses. If they were, how could anybody vote for hideous Hillary?

Remember how the ratings of an unpopular (and actually un-elected) president named George W. Bush leaped from around 50% at 9/11 to 70% just before the invasion of Iraq. Weak, unpopular presidents are sufficiently motivated to study history as to realize that war brings scared people together, causing them to unite around you. While the good thing about this nationally embarrassing farce will be the election of a highly unpopular president (vulnerable to overthrow), the really, really bad thing is that president might provoke World War III with Russia.

In that connection it might be worthwhile to check out the anti-Goldwater ad of the Democrats in 1964, raising this very issue. Fear, people, fear.

Written by Gary Leupp is Professor of History at Tufts University, and holds a secondary appointment in the Department of Religion. He is the author of Servants, Shophands and Laborers in in the Cities of Tokugawa Japan; Male Colors: The Construction of Homosexuality in Tokugawa Japan; and Interracial Intimacy in Japan: Western Men and Japanese Women, 1543-1900. He is a contributor to Hopeless: Barack Obama and the Politics of Illusion, (AK Press). He can be reached at: [email protected]

Original source and provided by  CounterPunch