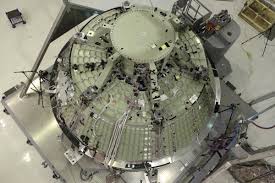 The Orion capsule that will make the first flight test into space was celebrated Monday morning as the cornerstone of a new era of exploration for America’s space program.

The spacecraft’s aluminum-alloy crew pressure module arrived at NASA’s Kennedy Space Center in Florida on Friday, June 29, where it will be built up into a fully functioning spacecraft ahead of a test flight slated for 2014.

Scroll down for video 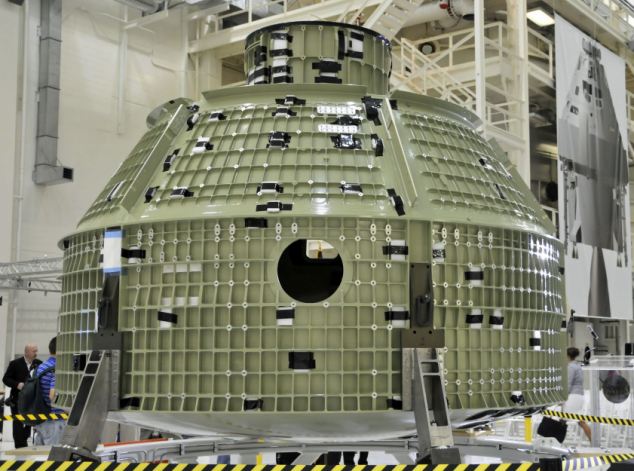 Pressure shell: Nasa’s new Orion spacecraft at Kennedy Space Center. In the next 18 months the shell will be packed with avionics, instrumentation an flight computers 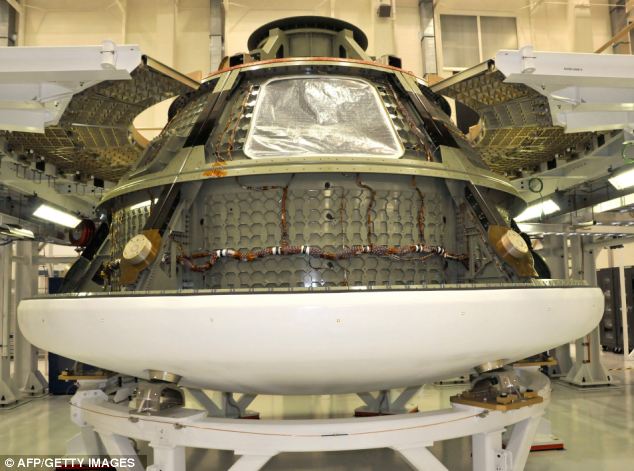 Taking shape: The Orion, which mimics the classic conical shape of the Apollo mission crew capsules, is one of the most advanced craft ever built. 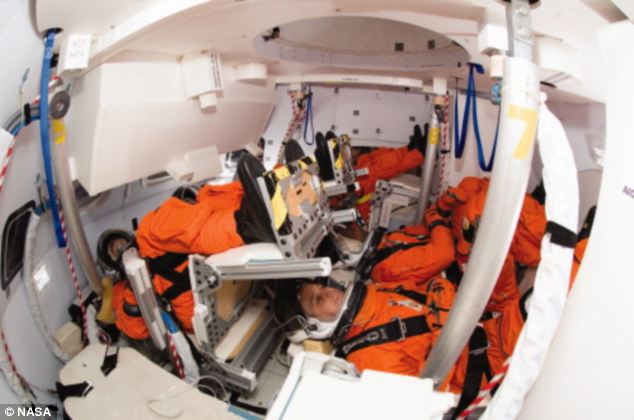 Orion will be the most advanced spacecraft ever designed. It will provide emergency abort capability, sustain astronauts during space travel and provide safe re-entry from deep space.

The 2014 uncrewed flight, called Exploration Flight Test-1 or EFT-1, will be loaded with a wide variety of instruments to evaluate how the spacecraft behaves during launch, in space and the through the searing heat of reentry.

Later Orion spacecraft will take astronauts on missions to destinations far beyond Earth, such as to an asteroid and Mars.

“Ladies and gentlemen, we’re going to Mars,” proclaimed U.S. Sen. Bill Nelson, D-Fla., who joined Garver and other officials to welcome the Orion spacecraft. “We know the Orion capsule is a critical part of the system that’s going to take us there.”

Designed with astronauts in mind, Orion will take crews beyond low-Earth orbit for the first time since 1972, when Apollo 17 completed the last moon landing. The Space Launch System, or SLS — a gigantic rocket akin to the Saturn V that launched the Apollo spacecraft — is being developed to launch future Orion missions to deep space. The first launch of the SLS, with Orion atop, is scheduled for 2017.

Astronaut Rex Walheim, who flew on the final space shuttle mission and has had a leading role in the development of Orion, said the capsule can be the principal spacecraft for 30 years of human exploration of the solar system.

“It’s the first in a line of vehicles that can take us where we’ve never gone before,” Walheim said. “It’ll be a building block approach, we’ll have to have a lander and a habitation module, but we can get there.”

Although the design is reminiscent of the landmark Apollo capsule that took men to the moon, the interior of the spacecraft if significantly more advanced. Its guidance, navigation and life support equipment have seen significant improvements in size and capabilities.

For now, the focus for NASA and Lockheed Martin, the spacecraft’s builder, is on preparing this capsule for space in 2014. During the EFT-1 mission, a Delta IV-Heavy rocket from United Launch Alliance will lift the spacecraft into orbit. Its second stage will remain attached to the capsule and will be fired to raise the Orion’s orbit to 3,600 miles, about 15 times higher than the International Space Station. The mission will last only a few hours, long enough to make two orbits before being sent plunging back into the atmosphere to test it at deep-space reentry speeds.

Assembly at Kennedy will take place in the high bay of the Operations and Checkout Building, or O&C. The O&C was refurbished extensively in 2006 and has been outfitted with large fixtures and tools to turn the aluminum shell of Orion into a functioning spacecraft complete with avionics, instrumentation and heat shield.

The space-bound Orion was welded at NASA’s Michoud Assembly Facility in New Orleans, in the same factory that built the external tanks for space shuttle missions.

NASA’s Ground Services Development and Operations Program, or GSDO, oversaw development of the mobile launcher that will provide a launch pad for the SLS and Orion missions. The program also refurbished Launch Pad 39B, designing a new pad structure emphasizing flexibility.

“A vehicle can come in any shape and any size and be able to launch from this pad,” said Pepper Phillips, manager of the GSDO program.

The Orion program, based at Johnson Space Center in Houston, calls on multiple NASA centers to team up for the missions including EFT-1.

“Ultimately, we’re going to fly as one big team,” said Dave Beaman, Space Launch System spacecraft and payload integration manager based at Marshall Space Flight Center in Huntsville, Ala. “The fact that we’re two separate programs, and having the GSDO program here at Kennedy, it gets some early coordination going and gives a chance to iron out some wrinkles.”

Although EFT-1 will be launched aboard a Delta IV-Heavy rocket, it will use a stage adapter design that also will connect the Orion to the SLS.

“You want to make a part that can be designed for the Orion flight, as well as the SLS flights so you only have to design it once,” Beaman said. “We’ll get flight data on the performance, which really helps.”

The spacecraft arrived at Kennedy nearly 50 years to the day that the center was born. Both occasions give NASA a great chance to set future milestones that will be as celebrated as those already achieved, Garver said.

“It’s a great day and great way to celebrate 50 years of success and talk about 50 years in the future,” Garver said.

Over the next 18 months, engineers and technicians at the space centre will install avionics, instrumentation, flight computers and the heat shield – slowly building and filling up the pressure shell into a fully functioning spacecraft.

U.S. Senator Bill Nelson, of Florida, was instrumental in getting congressional funding for Nasa to build the capsule – officially titled the Orion Multipurpose Crew Vehicle (MPCV).

More money is earmarked for the launch vehicle, a Space Launch System (SLS) booster rocket similar in size and design to the Saturn V rockets of the Apollo missions. 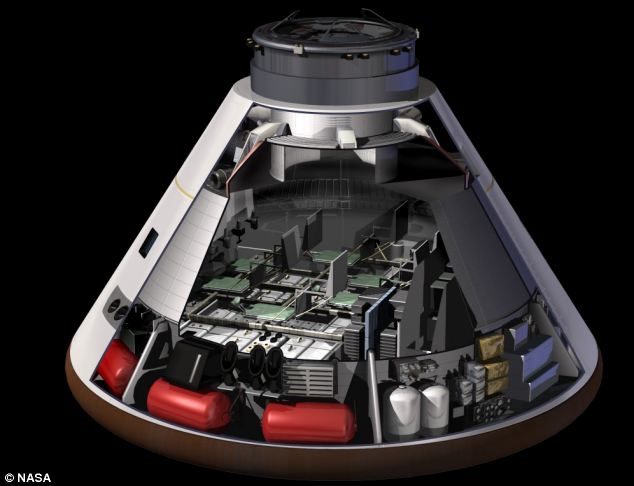 Cut-away artwork: A Nasa graphic gives a clearer indication of what the finished product will look like – with the crew compartment, oxygen and fuel tanks shown in detail

Clearly proud of his achievement – and echoing President John Kennedy’s bold claim to put a man on the moon by the end of the 1960s – Senator Nelson proclaimed: ‘Ladies and gentlemen, we’re going to Mars.

‘Without question, the long-term goal of our space programme, human space programme right now is the goal of going to Mars in the decade of the 2030s.

‘The president’s goal is an asteroid in 2025. But we know the Orion capsule is a critical part of the system that is going to take us there.’ 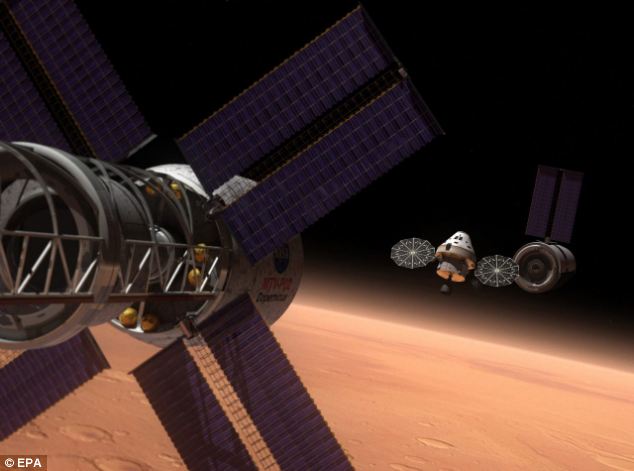 Artist’s rendering: The Orion – or Multipurpose Crew Vehicle (MPCV) – can be seen in the centre of this vision of a possible mission to MarsThe first real test of the craft, Exploration Flight Test 1 (EFT-1), will be in two year’s time. Crammed with instrumentation and sensors, Nasa will learn whether Orion can withstand the enormous stresses of launch, orbit and re-entry.There are mission plans for pairing Orion capsule with the mighty SLS rocket in 2017 – even for a crewed orbit of the moon in 2021.

But the major hurdle for Nasa to overcome is government funding. 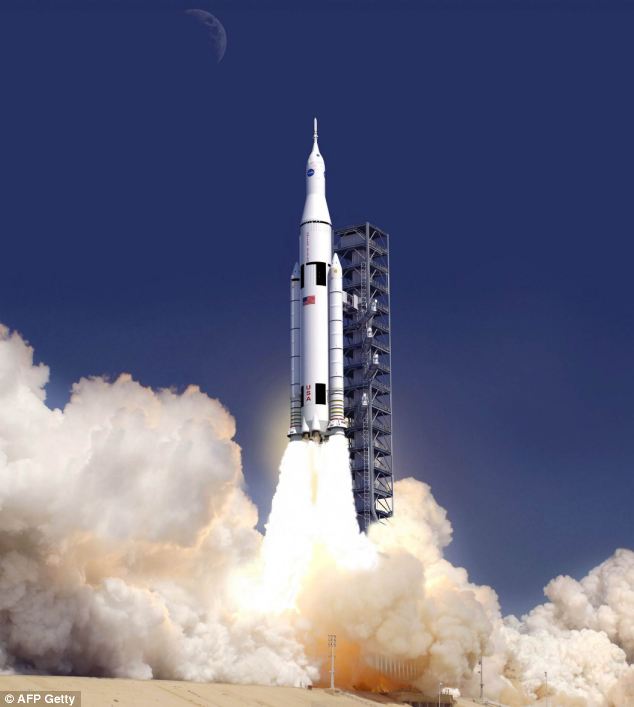 Ultimate goal: The Orion capsule atop a SLS rocket launching into orbit. Subject to funding, Nasa hopes to pair the capsule and the mighty Saturn V-style booster for a launch in 2017

As Ken Kremer writes in an article about the Orion welcoming party for Universe Today: ‘In these lean times, there is no guarantee of future funding.

‘Nasa’s budget has already been significantly chopped – forcing numerous delays and outright mission cancellations on many NASA projects, including: the outright termination of NASA next Mars rover; multi-year delays to the commercial crew programme; and prior plans to launch a crewed Orion to orbit as early as 2013.’