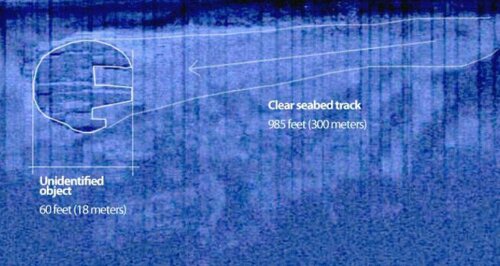 Divers exploring a ‘UFO-shaped’ object in the Baltic sea say that the strange, curved object might be a Nazi device lost beneath the waves since the end of the Second World War.

The huge steel-and-concrete structure could be one of the most important historical finds in years. Autellus claims it would have been built of double-skinned concrete and reinforced with wire mesh to baffle radar – which could explain why the dive team’s equipment repeatedly failed near the mystery object. ‘The area was vital to the German war machine because most of the ball bearings for its tanks and trucks came from here. Without them the German army would have ground to a halt,’ explained one expert. ‘This device dwarfs anything ever found before and is an important weapons discovery,’ they added. Explorer Stefan Hogeborn – who is studying the images for the Ocean X diving team – agreed: ‘It is a good candidate for the answer to this mystery. The object lies directly underneath a shipping route.’ ‘It would be of enormous weight in steel and concrete. Other Nazi anti-sub anchoring devices were nowhere near as large,’ he added. While the Ocean Explorer team is understandably excited about their potentially earth-shattering find, others are slightly more sceptical and are questioning the accuracy of the sonar technology.

Autellus says it is likely that the object is built from double-skinned concrete for the purpose of holding large steel wire mesh structures, expected to disturb the propagation of radar and other signals used by any nearby submarines. During the decades after the war, the wire mesh structures would have eroded away, leaving only the holes shown on the images provided by Ocean X.

Stefan Hogeborn, a member of the Ocean X research team states that Autellus’ theory is a good candidate for the answer to the mystery. ‘The object looks like as it has been formed by pouring, layer by layer. It is believable also because the object is located in the middle of a ship route’.

The Swedish team exploring the structure have been plagued with problems. The divers exploring a ‘UFO-shaped’ object at the bottom of the Baltic Sea said that team their equipment stops working when they approach within 200m.

The object was first found in May last year, but because of a lack of funding and bad timing, they have were not able to pull a team together to see for themselves – just the strange, metallic outline, and a similar disk-shaped object about 200 metres away. During their visit, the team saw a 985-foot trail that they described ‘as a runway or a downhill path that is flattened at the seabed with the object at the end of it’. As it was before the recent dive, the story behind the object is anyone’s guess, from a ‘plug to the inner world’ to the Millennium Falcon ship from Star Wars. In the past, such technology has confused foreign objects with unusual- but natural – rock formations. Part of the trouble they face, however, is that they have no way of telling what is inside the supposed cylinder- whether it is filled with gold and riches or simply aged sediment particles. They’re hoping for the former, and history seems to be in their favour. The Baltic Sea is a treasure trove for shipwreck hunters, as an estimated 100,000 objects are thought to line the cold sea’s floor. The company have created a submarine that they hope will appeal to tourists and wannabe shipwreck hunters who will pay to take a trip down to the bottom of the Baltic Sea to see for themselves. A further dive will take place in the coming weeks.