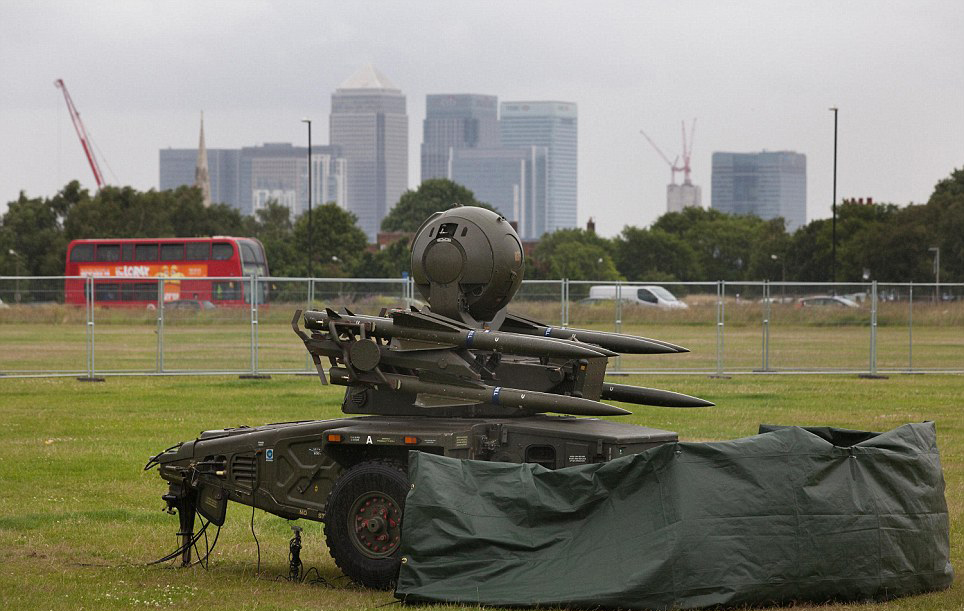 Soldiers in residential tower blocks and green open spaces were yesterday pictured installing surface-to-air missiles at six sites across the capital, a show of strength not seen in this country since the Second World War.

With two weeks to go before the start of the London 2012 Olympic Games, it marks a dramatic development in the biggest peacetime security operation the country has ever seen. 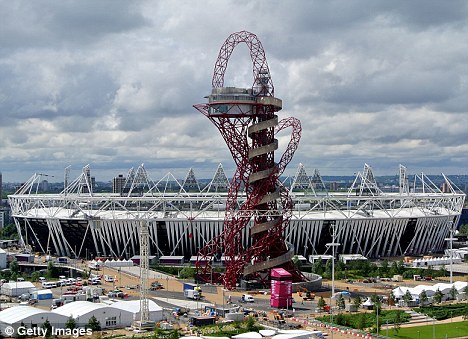 Show of strength: With two weeks to go before the start of the London 2012 Olympic Games, it marks a dramatic development as part of the security operation 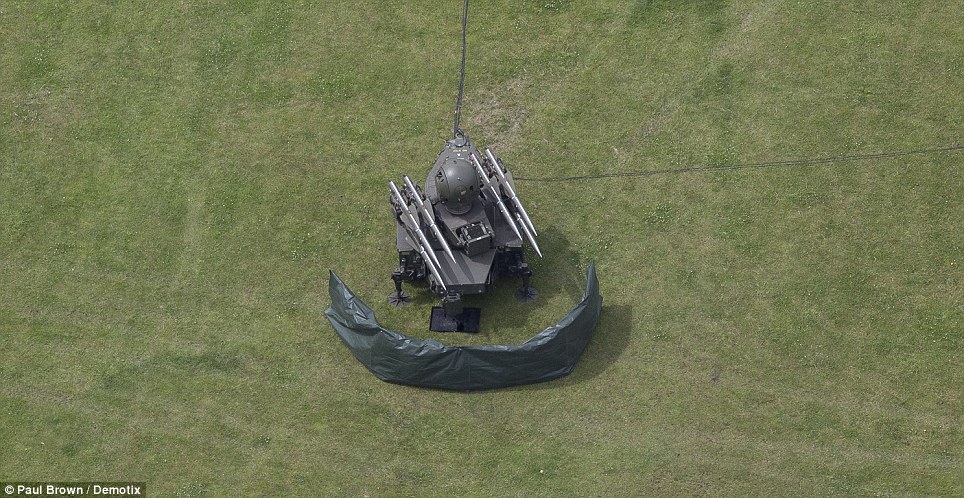 Security: Soldiers in residential tower blocks and green open spaces were yesterday pictured installing surface-to-air missiles at a number of sites across the capital. This image shows Rapier missile systems on Blackheath Common 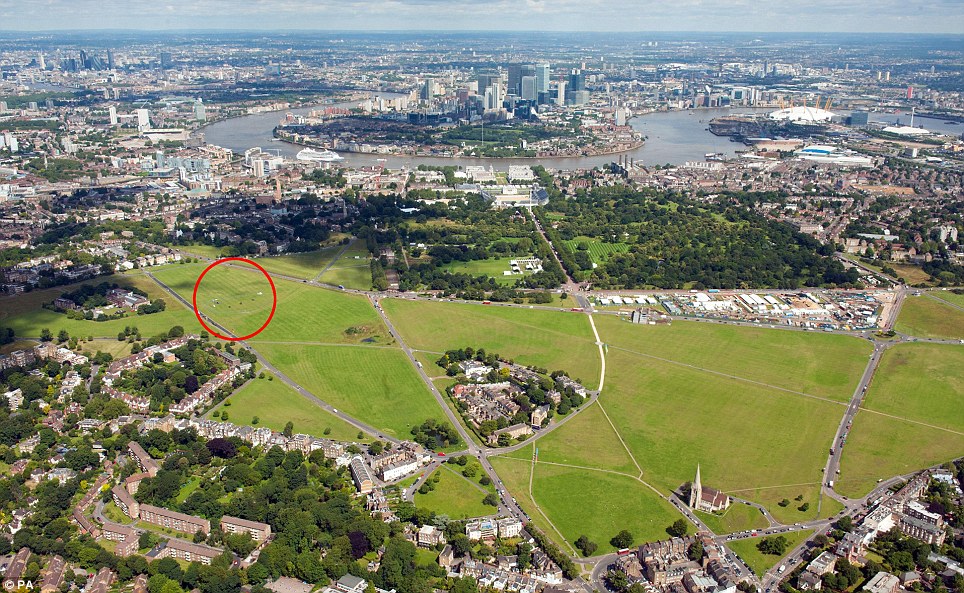 Armed: Blackheath Common was chosen because of its strategic location to the Olympic site 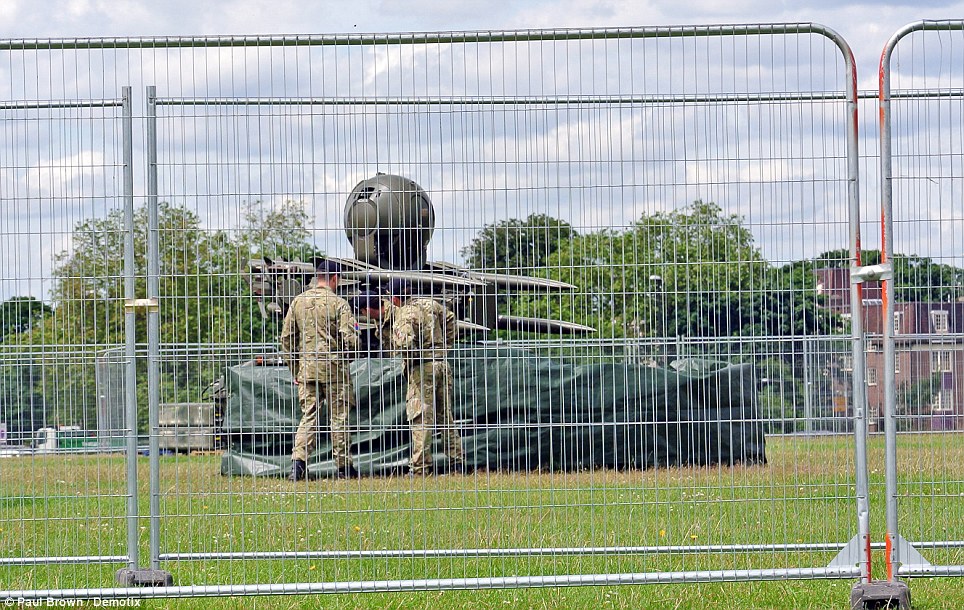 Powerful: Rapier missiles are pictured being unpacked on Blackheath Common 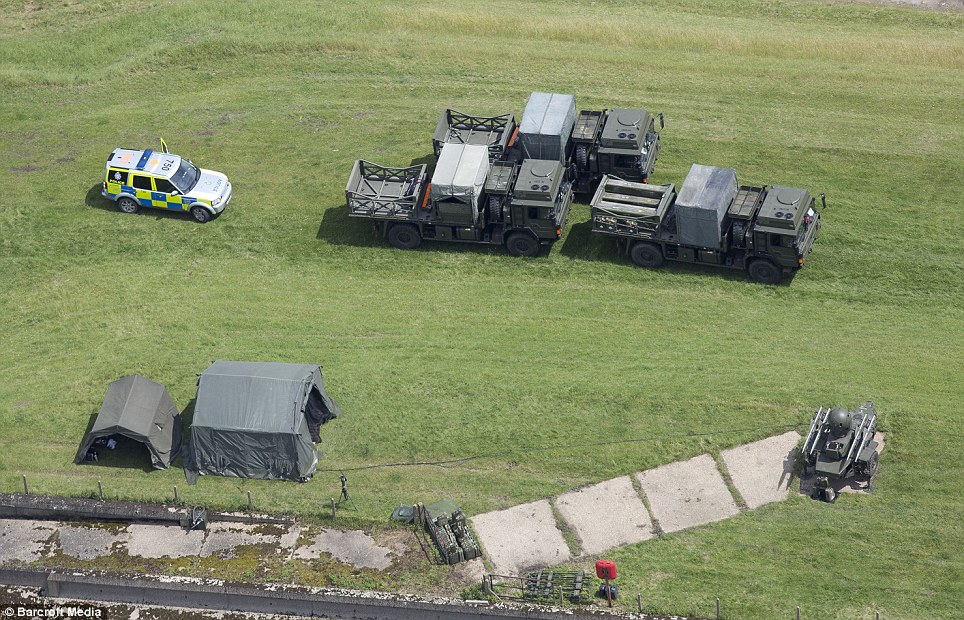 Protection: An anti-aircraft rocket is pictured being put into place at the William Girling Reservoir

The most controversial of these is at the residential block Fred Wigg Tower in Leytonstone, east London.

Swarming like ants across the rooftop, members of the Royal Artillery were pictured setting up the weapons.

Troops carried truckloads of equipment up the 17-storey block ready to assemble it to protect the Olympic Games from terrorist attack.

The Starstreak high-velocity missile systems, whose laser-guided weapons have a range of 3.4 miles, are so powerful they can bring down an aircraft.

Residents this week lost their bid to force a judicial review into the decision to deploy the air defences above their heads.

weaponry in the capital again 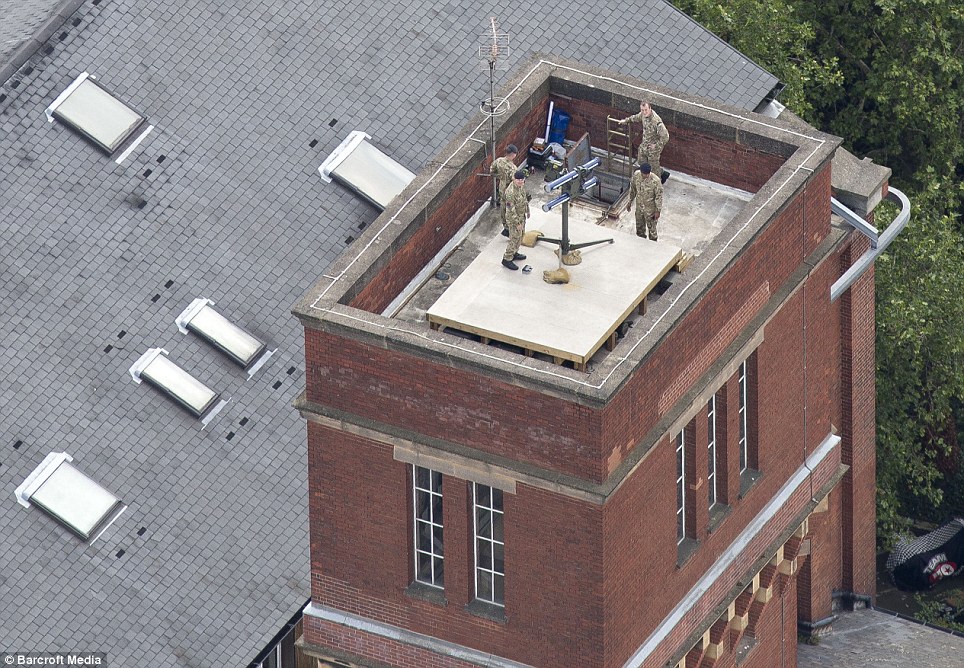 Force: Soldiers are pictured preparing the missile site on the top of Lexington Building, Tower Hamlets. It is part of the biggest peacetime security operation the country has ever seen 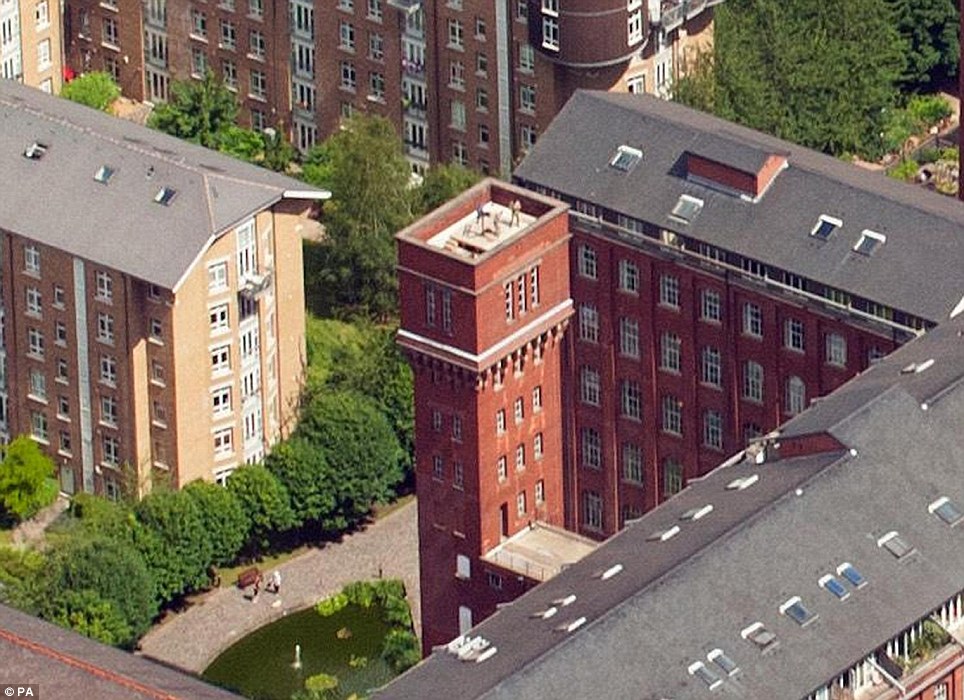 Controversial: This picture shows the site on top of the Lexington Building, in Bow, London, from a distance. Residents have been left alarmed by the plans to store missiles on the six sites

The tenants fear the move could make them a terrorist target but security chiefs say there is ‘no credible threat’ and the siting of the missiles is ‘proportionate’.

Another Starstreak system was also placed at the Lexington Building, a gated community in Bow, East London.Cover is also being provided by Rapier towed missile systems, which have a range of 7.5 miles, at Blackheath Common and Oxleas Wood, both in South East London, a reservoir in Enfield and a farm in Epping Forest. 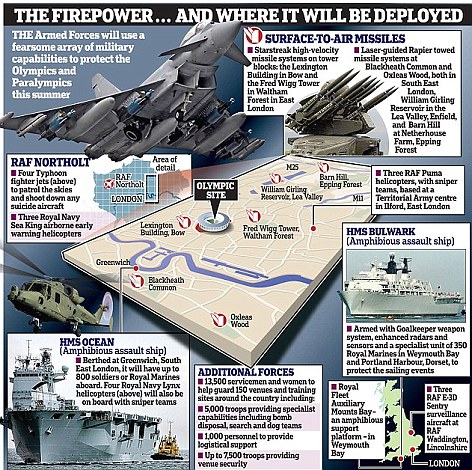 One of the UK’s top UFO experts, Nick Pope, who worked at the MoD for 20 years, investigated reports of UFOs between 1991 and 1994, and says he began his research as a sceptic, before becoming convinced that the sightings raised important defence for national security and air safety issues.

Mass summer events like the upcoming Olympic Games in London would be a prime time for crafts from other worlds to present themselves to mankind, according to Mr Pope.

He said: ‘It has been a widely held belief in Ministry of Defence circles that “aliens” have been able to detect us for decades via TV and radio broadcasts.

‘What once seemed like science fiction is steadily being realised by central governing bodies as distinctly real.

‘If aliens have studied our psychology, they may choose to appear in our skies on a significant date – the closing ceremony of the Olympic Games is one date being widely circulated by conspiracy groups.’

The Ministry of Defence (MoD), security service and police maintain there is ‘no credible threat’ to the Games and say the siting of the missiles is both ‘legitimate and proportionate’.

The Defence Secretary has described the ground-based air defence systems as ‘just one part of a comprehensive, multi-layered air security plan’ which would provide ‘both reassurance and a powerful deterrent’ during the Games.

The security plan includes a helicopter carrier, HMS Ocean, being moored in the River Thames, with RAF Typhoon jets stationed ready at RAF Northolt and Puma helicopters at a Territorial Army centre in Ilford.

David Cameron will have the grim task of ordering the Armed Forces to use the missile defence systems to shoot down a passenger airliner over Britain if a suicide attack is suspected of being underway. 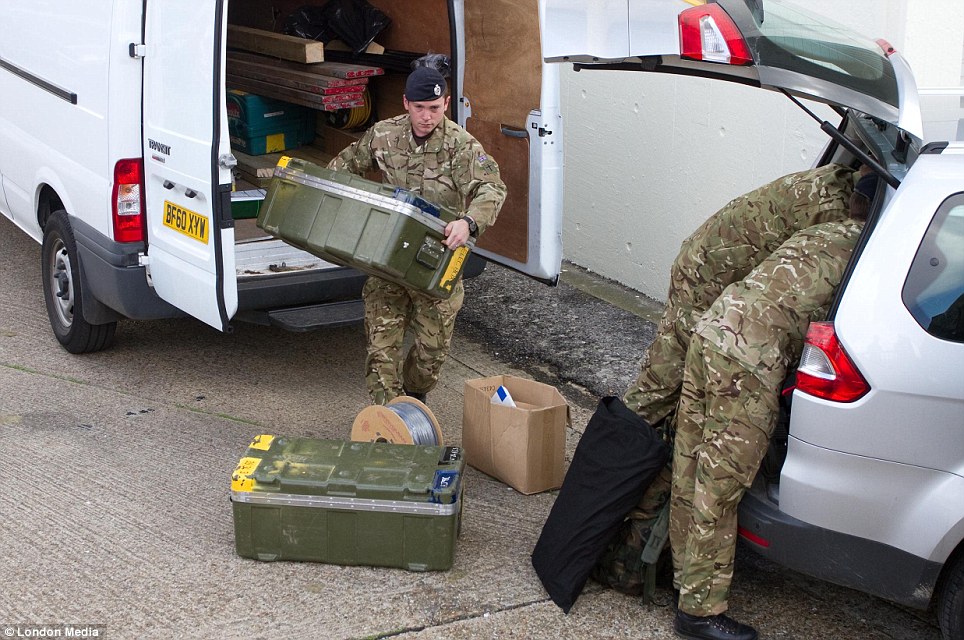 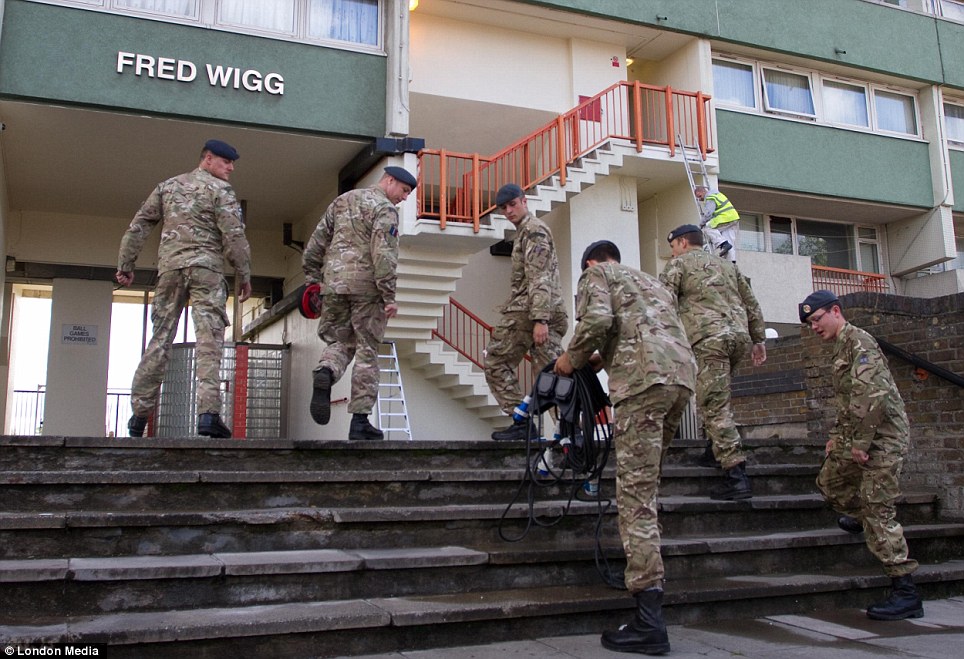 Deterrent: Once on top of the building, they began constructing the surface-to air missile system on the roof 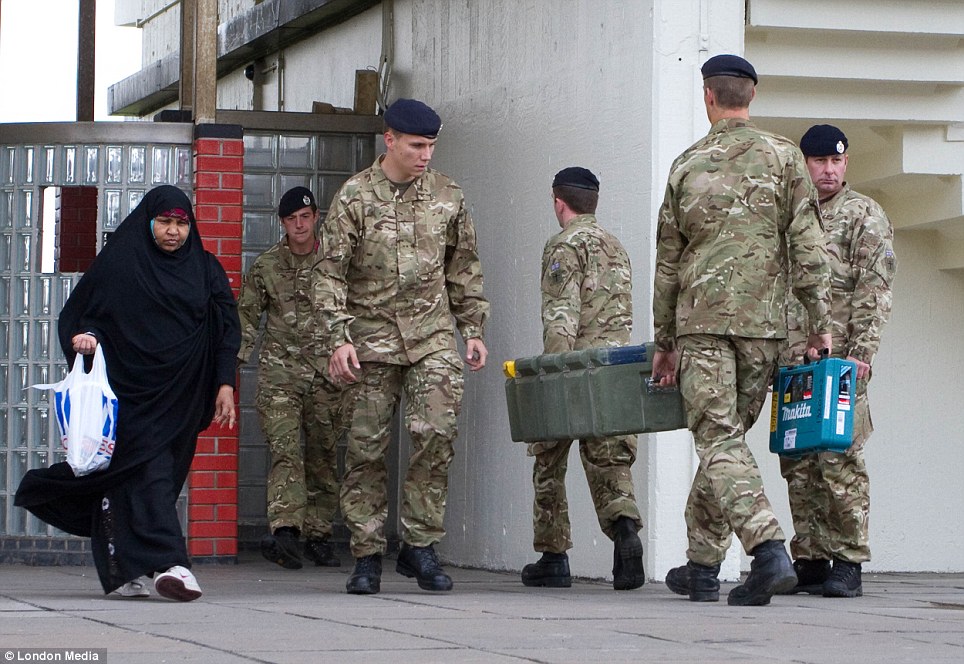 Bizarre: A woman goes about her daily business close to the residential tower block as soldiers prepared the missile defence system

MI5 and MI6 have been put under ‘unprecedented pressure’ by the Olympics, leaving Britain vulnerable to terrorist attacks.

The annual report of Parliament’s Intelligence and Security Committee warned that ‘risks’ have been taken with security to concentrate on protecting the Games.

Intelligence chiefs told the committee that spies have identified three potential sources of terrorist threat to the Games.

Al Qaeda and its affiliates could launch a conventional terrorist attack which might target American or Israeli nationals.

Irish republican groups are judged to be capable of a smaller attack or a hoax aimed at causing disruption rather than mass casualties.

There could also be clashes between rival groups or minorities present in London during the Games who would not normally be considered a security threat to the UK.

The report says: ‘We recognise that the Security Service has taken all possible measures to make available the necessary resources during the period of the Olympic and Paralympic Games, but remain concerned at the risk that is being taken in some areas and the vulnerability of the UK at this critical period.

‘It is clear that coverage of terrorist groups is by no means comprehensive.

The Prime Minister will be ultimately responsible for a decision to fire missiles to blast a suicide jet, possibly carrying terrified innocent civilians, out of the skies.

Colonel Jon Campbell, commander of the Joint Ground Based Air Defence, has previously said: ‘We have done as much as we can to allay people’s fears.

‘The Rapier system has a world-class radar on it and is particularly good at picking up low and slow-moving objects in the sky.

‘It means we’re able to get the very best picture of what is happening in the skies of London.’

Air Vice Marshall Stuart Atha also said previously: ‘We want the focus to be on Usain Bolt this summer and not us. We’re very proud to be part of this plan to deliver a safe and secure Olympics.’

A campaign to stop the Ministry of Defence deploying surface to air missiles on top of homes as part of Olympic security was taken to Parliament yesterday.

Labour’s John Cryer tabled an early day motion in the House of Commons urging MPs to signal their opposition to the plans.

The Leyton and Wanstead MP said residents in his constituency feared the result of deploying the weapons, which could be used to shoot down aircraft threatening the London 2012 Olympics over east London.

A legal bid by the residents of the Fred Wigg tower, in Leytonstone, was dropped after the High Court rejected the challenge yesterday.

Mr Cryer’s motion said: ‘This House recognises the need to provide reasonable security for the Olympic Games but is concerned at the unprecedented decision of the Ministry of Defence, in peacetime and where no emergency has arisen, to station troops, armed police and ground-based air defence missile systems on top of Fred Wigg Tower.

‘(It is) a civilian residential block of flats, in Leyton, and without any consultation with the residents affected and without bringing the matter before Commons.

‘(This is) despite the fact that seven years have passed since this country was awarded the Olympic Games.

‘It calls on the Ministry of Defence to examine urgently the possibility of building a temporary tower for the missile systems instead of siting such weapons and launch pads over the heads of the ordinary men, women and children who have had no say in the decision. 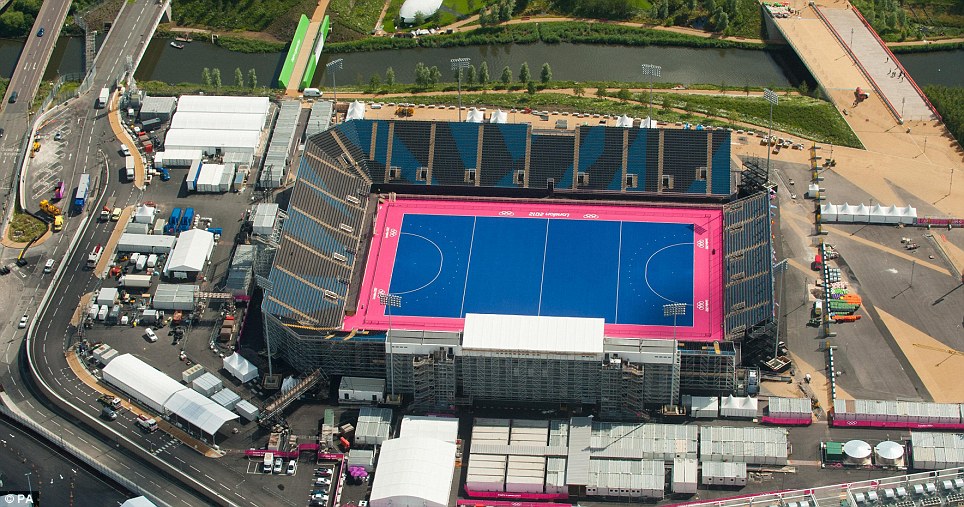 Protected: The missiles are hoped to stave off the threat of a terror attack on venues such as the hockey arena 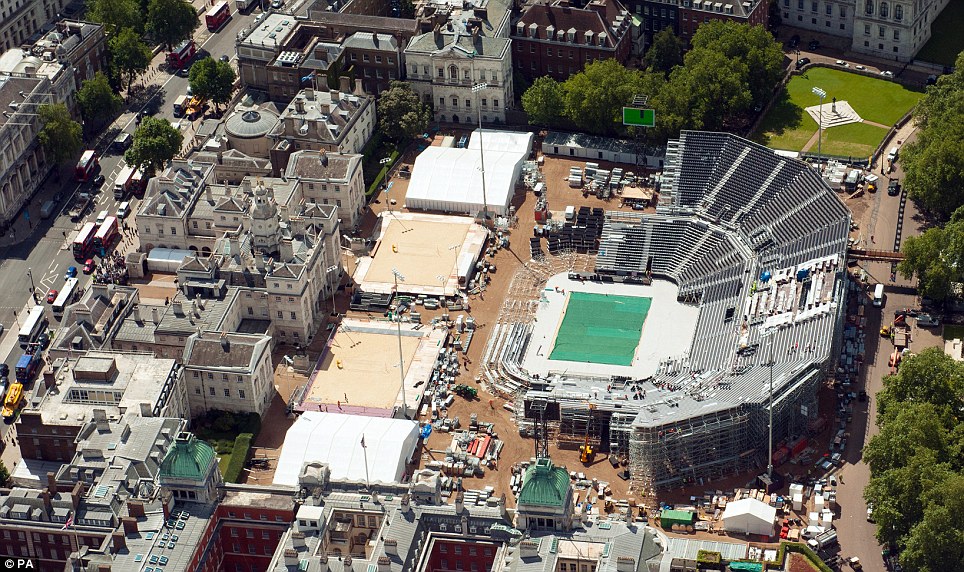 Target: The Beach Volleyball arena, on Horseguards’ Parade is the only central London arena for the Games

A soldier walks through the Olympic Park in Stratford yesterday as it emerged the Government is to call upon an extra 3,500 military personnel to protect the Games. 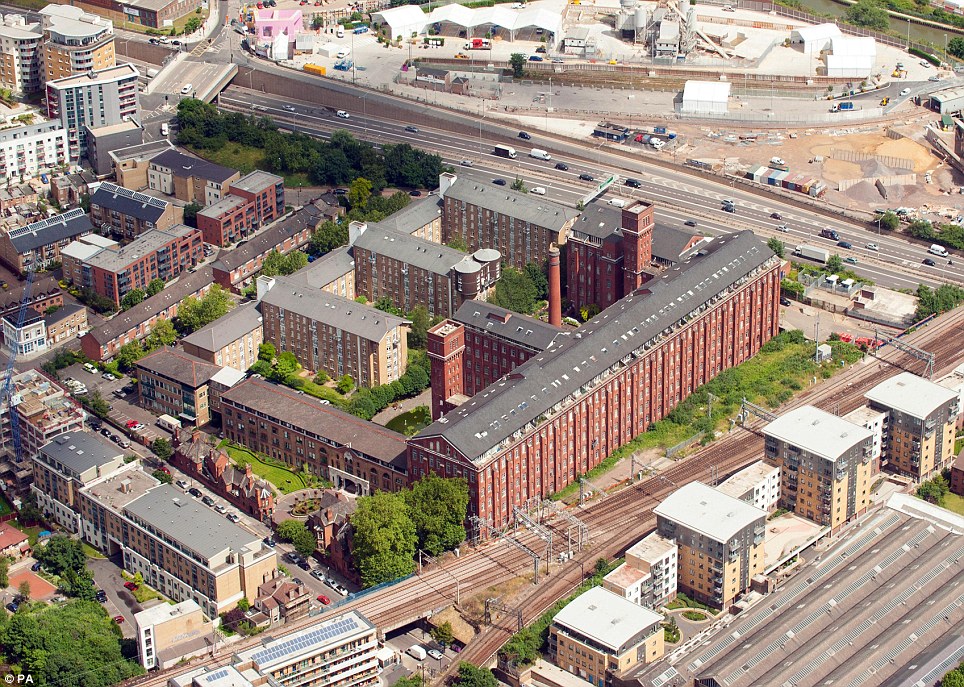 Strategic: An aerial view of the Lexington Building, in Bow, London, which is one of the six missile sites. The Defence Secretary has described the ground-based air defence systems as being a ‘powerful deterrent’ during the Games 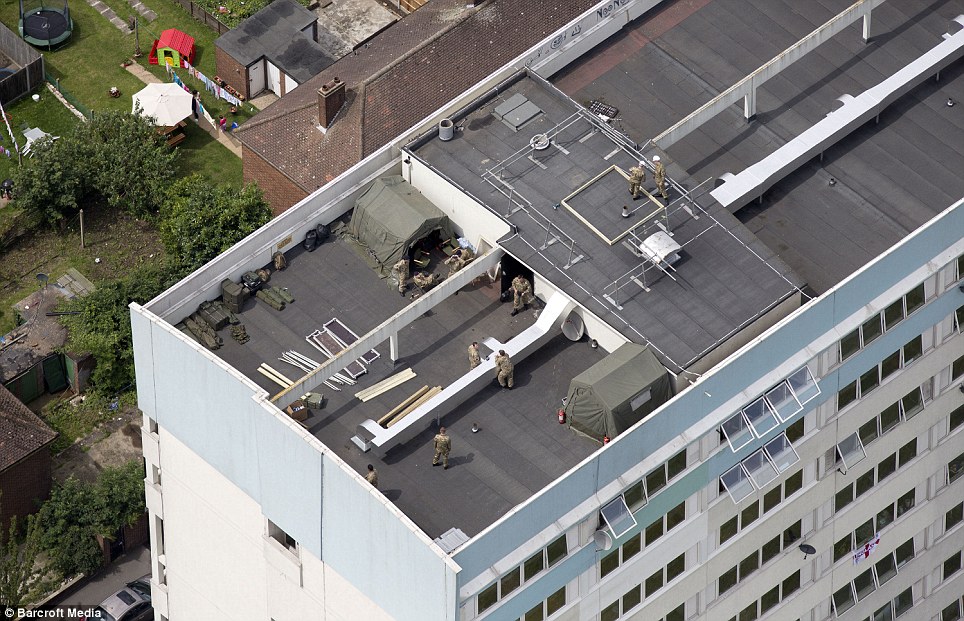 Not happy: A legal bid by the residents of the Fred Wigg tower, in Leytonstone, pictured, to stop the installing of surface-to-air missiles was dropped after the High Court rejected the challenge yesterday’Or, alternatively, to provide proper security to protect the residents living in Fred Wigg Tower from potential terrorist attack and to provide financial assistance to concerned and worried residents who wish to move for the duration of the Olympic Games and Paralympic Games.’Early day motions are tabled by MPs seeking to gather support for an issue or cause.Other MPs can sign them to signal support but they are not debated in the Commons. One MP, Labour’s John McDonnell (Hayes and Harlington) has so far signed Mr Cryer’s motion since it was posted yesterday.Home Secretary Theresa May has already faced accusations that Olympics security is a shambles after the Armed Forces were called in to plug a gap left by the failure of bungling G4S chiefs. 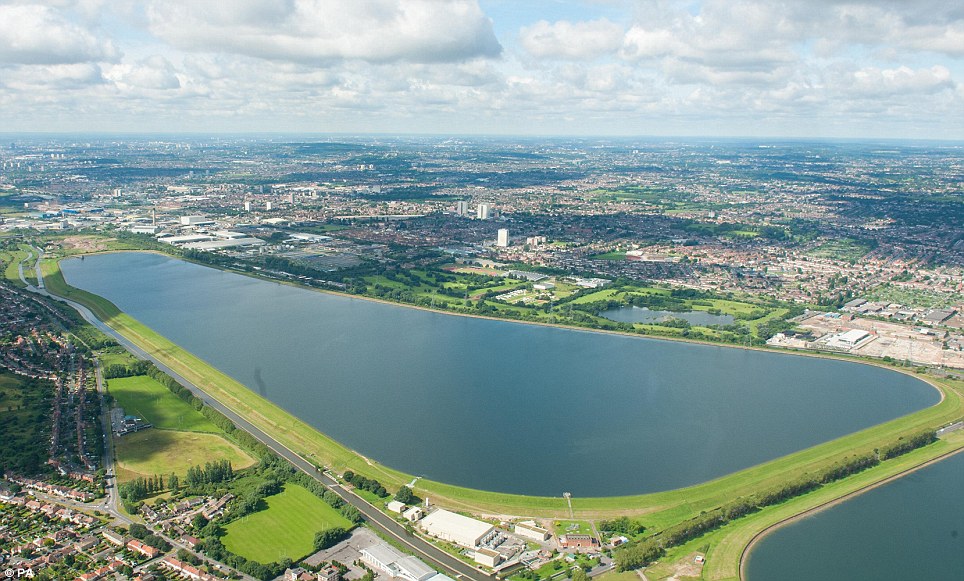 Secure: An aerial picture of the William Girling Reservoir, in Enfield, London. Yesterday troops began setting up missiles at the site 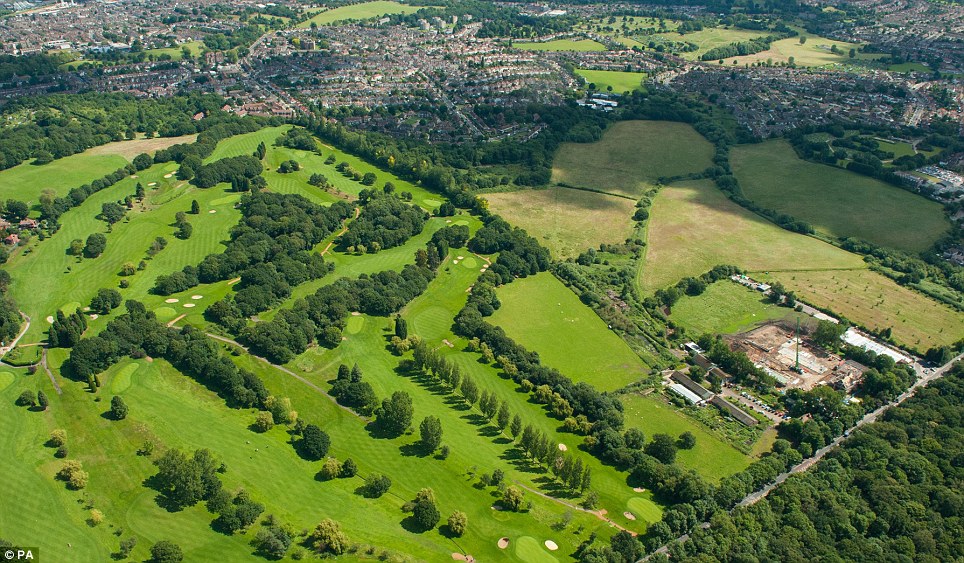 Open space: Oxleas Meadow, near Shooters Hill, London, is also one of the six sites 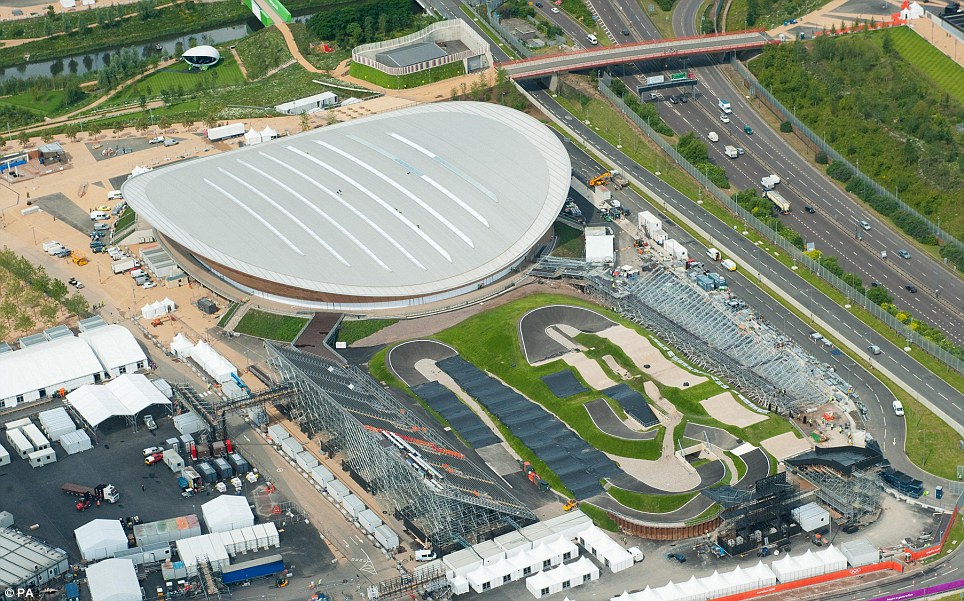 Venues: The Olympic Velodrome (top) and the BMX track make up part the Olympic Park

With just two weeks to go until the opening ceremony, an extra 3,500 servicemen and women are being flown in after the firm, which has a history of mistakes, said it might not be able to provide enough guards for all the venues.

MPs accused the company of letting the country down, while Mrs May insisted ministers were told of the ‘absolute gap in the numbers’ only on Wednesday. In other developments in a growing pre-Games meltdown yesterday: 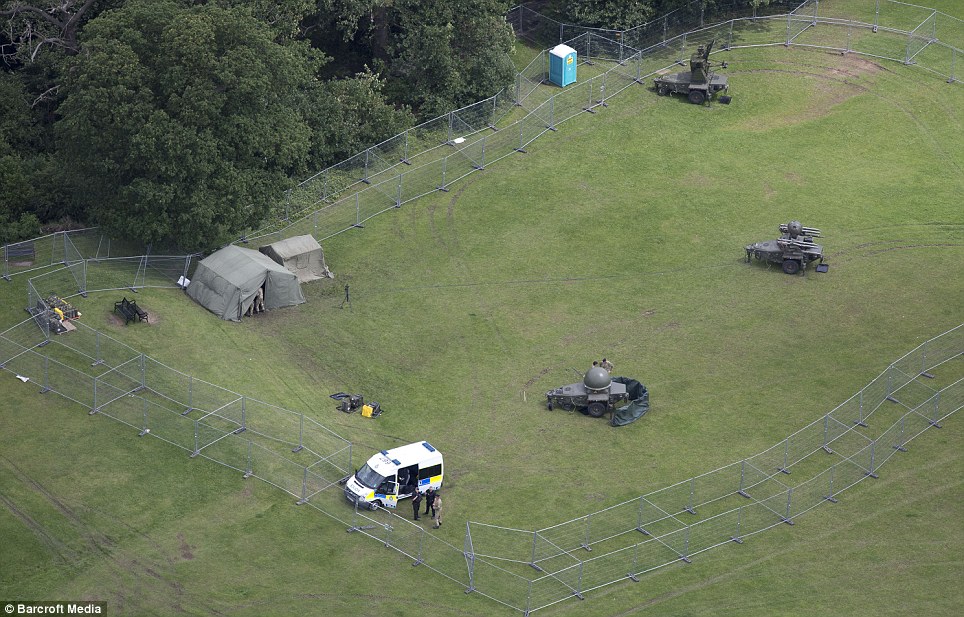 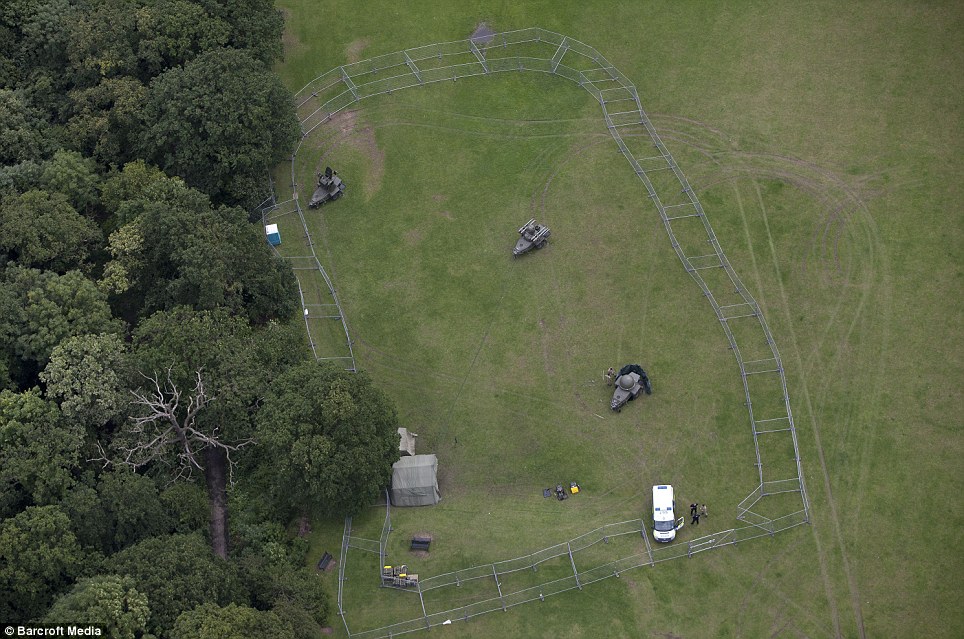 Worries: The anti-aircraft rocket sites have been causing alarm and panic amongst local residents. 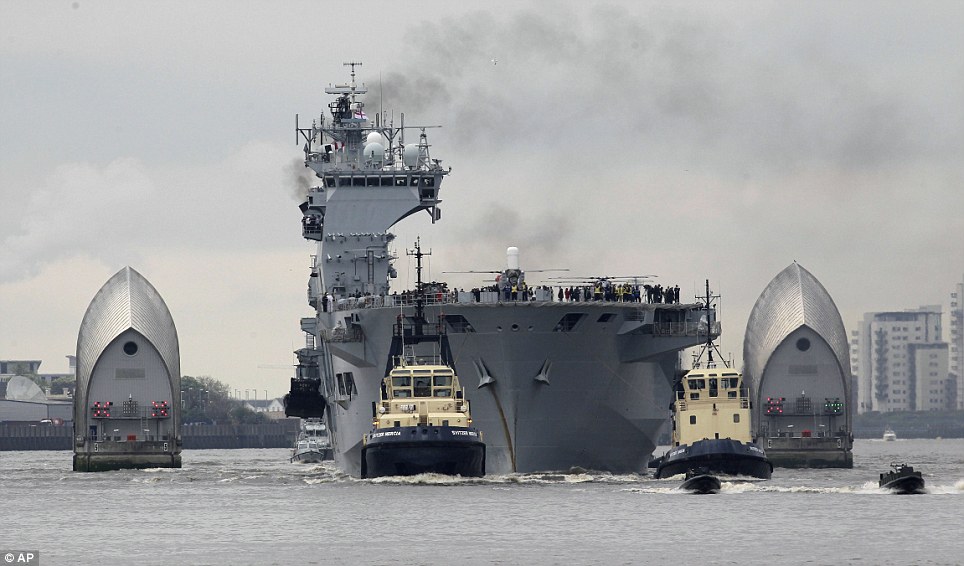 Welcome to London: The UK’s largest warship HMS Ocean nudges its way through the Thames Barrier bzck in May on the way to docking at Greenwich