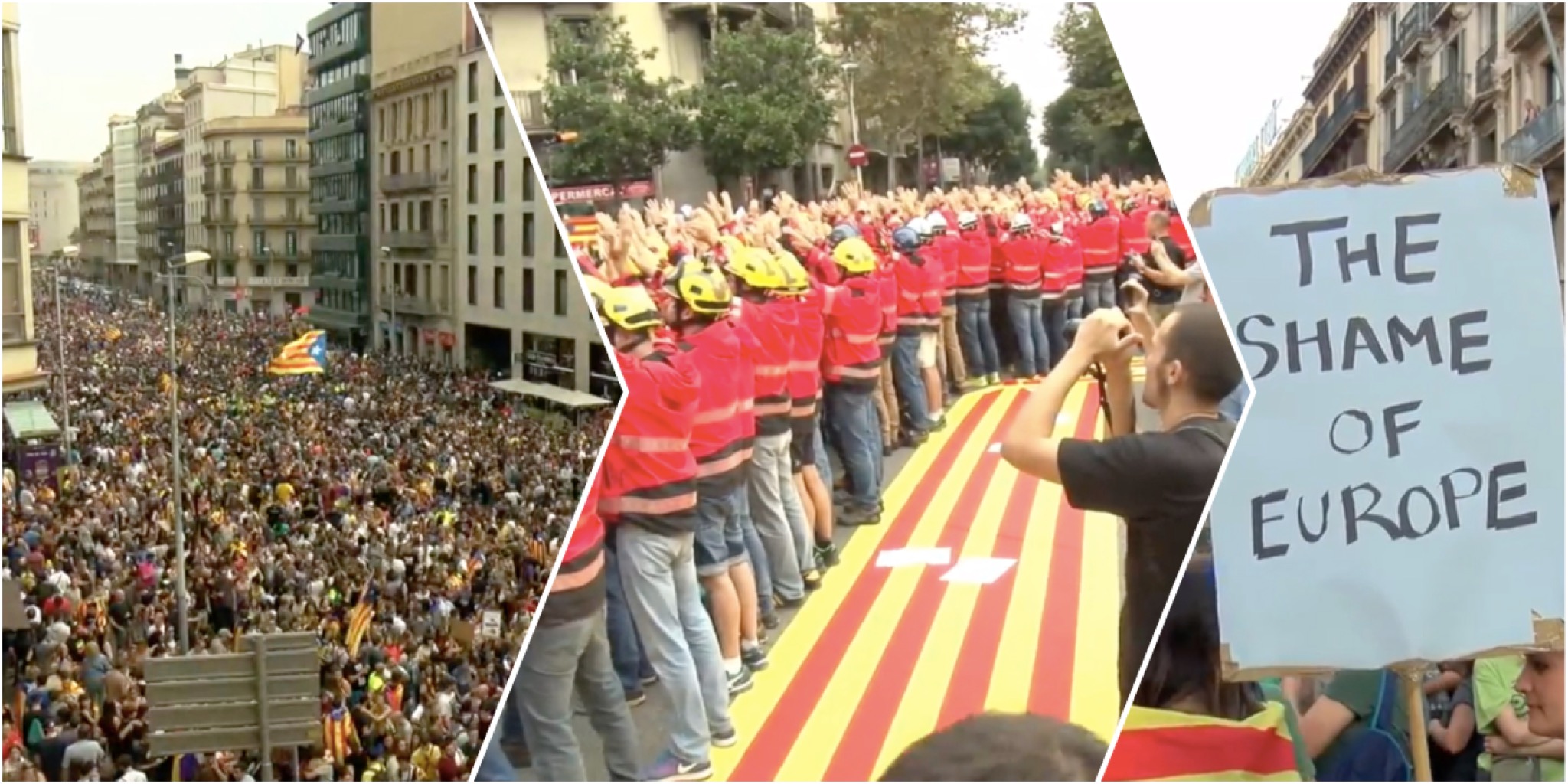 Thousands of pro-Catalan protesters hit the streets of central Barcelona, Tuesday, as a general strike in response to the police violence over the weekend’s referendum was called by Catalonian pro-independence groups and trade unions.

Barcelona’s university, Barcelona Football Club, the Sagrada Familia and the museum of contemporary art are among some of the institutions joining the general strike. Similar protests took place in La Bisbal de Falset and Corbera d’Ebre, Tarragona region, Vic and Sant Llorenç d’Hortonsn near Barcelona and others Catalan municipalities.

Hundreds of firefighters also joined the protesters general strike against police brutality over the weekend’s independence vote. Firefighters marched towards the headquarters of the Spanish government, before turning their backs on the administration’s buildings and raising their hands in silent protest.

Catalonia held a referendum on October 1 to decide on the region’s independence, with the Spanish government deeming the action ‘illegal’ and ‘unconstitutional.

90 % OF THOSE WHO VOTED IN THE INDEPENDENCE REFERENDUM ARE IN FAVOUR TO BREAK AWAY FROM MADRID. At least 893 people and 33 police officers were reportedly injured on Sunday’s independence referendum.

On the streets of Barcelona people where waiving Catalonian flags and banners with written signs “The shame of Europe”. This is due to mild response of the official Brussels on extreme police violence occurring on the day of the referendum.

Whats was the EU response?

“Under the Spanish Constitution, yesterday’s vote in Catalonia was not legal,” stated European Commission Chief Spokesperson Margaritis Schinas, during a press briefing in Brussels on Monday.

“For the European Commission, as President Juncker has reiterated repeatedly, this is an internal matter for Spain that has to be dealt with in line with the constitutional order of Spain,” said Schinas. The EC spokesperson then continued saying that “if a referendum were to be organised in line with the Spanish Constitution it would mean that the territory leaving would find itself outside of the European Union.”

Schinas also called for “all relevant players to now move very swiftly from confrontation to dialogue.”

Later on, a journalist intervened on the matter. The reporter first questioned Schinas on whether it is illegal “to let people vote or to suppress the possibility for people to express themselves.” He then asked the EC spokesperson if it was “necessary to attack people, peaceful people – people that were absolutely not violent – just because they were queuing up to vote.”

“I think you should say very clearly: ‘No, the police in Spain should have not attacked peaceful people queuing for voting.’ If you don’t say this, I’m sorry, you are not being the guardian of the treaty,” the journalist concluded. Schinas failed to reply to the intervention and moved on to the following question by another reporter.