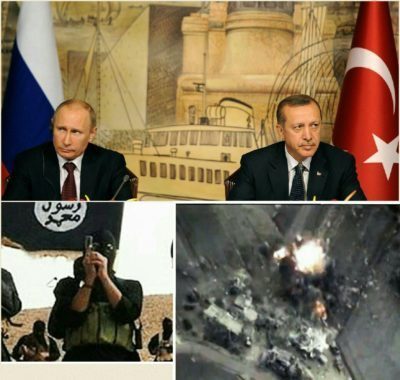 In latest media reports we have seen that ISIS is threatening Russia.

In a nine minutes YouTube video member of ISIS terrorist group is calling their supporters to wage attacks on Russia.

Masked assailants said : “Listen Putin, we will come to Russia and will kill you at your homes.Oh Brothers, carry out jihad and kill and fight them.”

These threats are coming after recent developments in that region: Turkish  failed coup, Erdogan changing its views towards Russia, Erdogan apologising to Putin for downing russian plane and restoring its economic plans and ties with Russia.

There are reports coming from Syria that Syrian rebels have launched an offensive aimed at breaking a government siege of eastern Aleppo, where the UN estimates some 300,000 people are trapped with dwindling food and medical supplies, and apparently plan is going well.

A Russian Mi-8 helicopter has been shot down by ground fire in Syria following delivery of humanitarian supplies to Aleppo, the Defense Ministry said. Three crew and two officers from Russia’s Reconciliation Center died, according to a Kremlin statement..

There is an undergoing siege of Aleppo and everything is being prepared for Aleppo to fall. Russian air force and military is giving support to Asad government to reclaim back its own territory from ISIS militants.

Not to forget latest US / Russia discussions about boosting military and intelligence cooperation in a bid to crush the Islamic extremists . The circle around  ISIS  is closing fast and apparently they are aware of it.

Please read more about this topic at: