Yellowstone – The lava pool “How much bigger” as previously believed ? 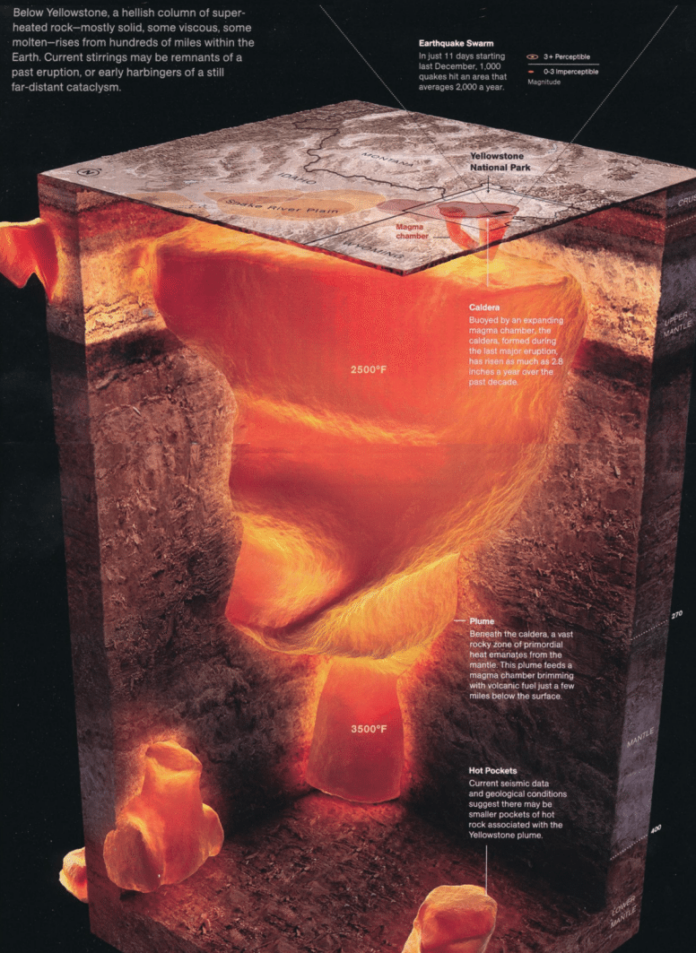 A supervolcano blasting Yellowstone National Park to smithereens may capture the imagination, but the region’s real risk comes from earthquakes, researchers reported here Sunday (Oct. 27) at the Geological Society of America’s annual meeting.

“The pervasive hazard in Yellowstone is earthquakes,” said Robert Smith, a seismologist at the University of Utah. “They are the killer events.”
VIDEO
KULR-8 Television, Billings, MT

Smith and his collaborators analyzed 4,520 earthquakes in and around Yellowstone that struck between 1985 and 2013. Their goal: Create the best picture ever of the magma chamber hidden beneath the park’s colorful hot springs and spectacular geysers. A side benefit was a better view of the seismic risk from nearby faults. [Infographic: Geology of Yellowstone] One of these faults triggered the most destructive earthquake ever recorded in the Rocky Mountains — the deadly magnitude-7.3 Hebgen Lake quake in 1959. The epicenter was about 15 miles (24 kilometers) north of West Yellowstone.

Smith said the probability of another magnitude-7 or larger earthquake on one of the major faults near Yellowstone is 0.125 percent. The number reflects the chance an earthquake will occur in any given year, based on past records.

The annual probability of a Yellowstone supereruption is a much smaller 0.00014 percent, Smith said.

Yellowstone National Park is cradled inside a gentle depression created by a giant volcanic eruption 640,000 years ago. The ground collapsed, leaving a bowl-shaped caldera. It was the third in a series of massive eruptions, the first of which exploded 2.1 million years ago.

A mantle plume (also called a hotspot) feeds Yellowstone’s supereruptions. Hotspots are massive rising blobs of hot rock from Earth’s mantle, the layer beneath the crust. As the planet’s tectonic plates trundle over hotspots, the plumes punch through the crust, forming volcanic chains like Hawaii or the Idaho’s Snake River Plain and Yellowstone.

In the millennia since the last massive volcanic blowout, magma has again built up beneath Yellowstone. The park trembles constantly with tiny earthquakes as gas and hot fluids course through underground fractures, escaping from the molten rock below.

Led by graduate student Jamie Farrell, the University of Utah group used these tremors like a CT scan, building a precise image of the underground magma reservoir.

The reservoir is shaped like a dog’s knobby chew toy, with one end about 9 miles (15 km) below the center of Yellowstone National Park, and the other rising to the northeast, about 3 miles (5 km) below the surface.

The shallow end extends 12 miles (20 km) northeast of the caldera rim created 640,000 years ago, Smith said. That distance matches the total tectonic drift of the North American plate over the Yellowstone mantle plume since that time, he said.

The huge column of molten rock that feeds Animation of Yellowstone’s plume in 3-D

The finding, based on the most detailed model yet of the region’s geologic plumbing, suggests that Yellowstone’s magma chamber contains even more fuel for a future “supereruption” than anyone had suspected.

The model shows that a 45-mile-wide (72-kilometer-wide) plume of hot, molten rock rises to feed the supervolcano from at least 410 miles (660 kilometers) beneath Earth’s surface.

The deepest part of the plume actually sits beneath the town of Wisdom, Montana, about 150 miles (241 kilometers) from Yellowstone National Park (see map).

But the steady flow of hot rock in Earth’s upper mantle causes the plume to drift to the southeast, where it fills a magma chamber that sits just 3.7 to 10 miles (5.9 to 16 kilometers) beneath Yellowstone. But that doesn’t mean the region is on the verge of exploding, said study leader Robert Smith, a geophysicist at the University of Utah in Salt Lake City.

“This [plume] is the source of Yellowstone’s volcanic system,” he said. “It doesn’t say anything about the probability of a big eruption. [That is] a very rare thing.”

Scientists had already known that Yellowstone is a volcanic hot spot, and that within the past two million years, the region has seen three mammoth eruptions at intervals of about 700,000 years.

Such events can produce at least 77 cubic miles (360 cubic kilometers) of basalt: enough to bury Washington, D.C., under nearly 7,200 feet (2,200 meters) of solidified lava, Self said during an October meeting of the Geological Society of America.

Even the largest of the more modern eruptions can’t compare, he said. “Supereruptions are very, very much larger. We’re talking a factor of a thousand or so.”

Luckily for us, eruptions on that scale are rare.

“Compared to our human lifespan, these systems have a very long … gestation period, if you will,” Self told National Geographic News. “So we’re not going to have an eruption immanently, almost certainly.”

Furthermore, he said, magma needs to be relatively fluid and gas-rich before it can erupt.

Otherwise, “it’s not going anywhere. … It could stay down there for a long time, or feed little eruptions, which these caldera systems like Yellowstone have done throughout their history.”

“They’re much more probable, but much smaller,” he said.

Magma movements may also play a role in triggering major earthquakes in the Yellowstone area, he added. The most recent Yellowstone quake was a magnitude 7.3 in 1959, which killed 28 people.

Smith’s team has been studying the Yellowstone caldera for years, using ever-more-sensitive instruments to find the source of the magma that fuels all this activity.

The new model of the plume is largely based on data from an array of super-sensitive seismometers set out in a 400-mile-long (644-kilometer-long) pattern focused on the Yellowstone region.

“A seismometer network is just like an antenna,” said Smith, who will be presenting his team’s work this week during the 2009 fall meeting of the American Geophysical Union in San Francisco.

“You’re listening for seismic waves that come into your antenna. You want it wide enough and long enough that you can detect these things coming up from the interior.”

Supereruptions aside, Smith thinks the coolest part of the new study, published in the current issue of the Journal of Volcanology and Geothermal Research, is that the heat source for Yellowstone’s famous geyser basins can be traced so deeply.

And Smith suspects that even more sensitive instruments will someday reveal that the magma source goes deeper yet.

“Ultimately,” he said, “the plumbing from the geysers may go clear down to the [lower] mantle”—at least 466 miles (750 kilometers) beneath Earth’s surface.