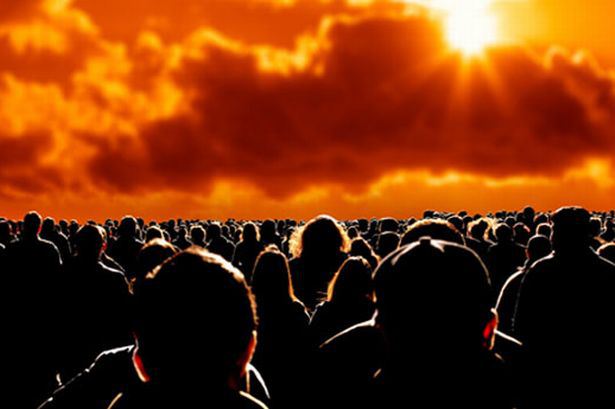 There’s lot going on right now with all of these frantic so-called “preparedness” drills. With government closing and the lights in Washington going out you can’t help but wonder. And what comes to mind? The many end of the world scenarios we have had pumped at us from birth, sensationalised heavily by “special effects” frenzied Hollywand.

Do they really know something? Or is this just more fear programming to gain a tighter grip on humanity. Or is it both? We can pretty much assume insider media moguls and movie producers have a lot of information at their fingertips we’re apparently not privy to. How they get this info is almost fun to visualize, almost like an old Spy vs Spy cartoon. Only these control creeps are ugly and dark.

Actually, many producers and writers have openly testified they’ve been “given” the ideas or script outlines by apparent “operatives”. This is especially the case when they show these huge scenes of massive military operations or the propaganda is particularly pointed; you then know the “suppliers” of all this equipment and backdrop have a heavy hand on the scale.

It’s clearly a pervasive factor in the content of these movies. The scale of social engineering on our planet is extraordinary.

Apocalypse In The News

The social programmers love this subject. While they try to keep their credibility with the more wary audience with comments about “crackpots, kooks and conspiracy nuts”, these Illuminist media controllers push the End of the World scenario big time.

We’ve seen the alien invasion how many times? Even the White House gets blasted on several occasions. We’ve had the asteroid impact over and over. Plagues killing us off are big, as are huge earthquake scenarios. Even a frozen future world with ‘Day After Tomorrow’ type movies. And it gets more bizarre all the time. Don’t you find it ironic they produce this stuff hand over fist and then these same elitists and their complicit media and education stooges work hard to belittle anyone who actually believes it? Isn’t that called getting “jerked around”?

Actually it’s a very sophisticated mind control technique, a deliberate mixture of traumatized cognitive dissonance while injecting predictive programming. It’s all acclimating their subjects to manipulated tension, fear and the ever present threat and even assumed “knowledge” of eventual apocalypse. Nasty psychopathic bastards, in a nutshell. But it’s effective.

Why, you ask? Are there deliberate forces out to decimate our planet? Is this what was done to Mars and other worlds by some parasitic other dimensional force?

The simple greed explanation makes no sense in the light of the suicidal rape and destruction of our planet we’re witnessing. There is a bigger picture we need to be aware of. Fortunately with that comes the empowerment to use the right tools to combat such an apparently inter-dimensional parasitic force.

But I digress…or did I?

I’m all on board with speaking up about potential natural disasters. The USGS isn’t even reporting earthquakes accurately any more and the weather news is completely controlled by the black op arm of the defense department. The EPA doesn’t test for chem-trail chemicals and shut down their radiation sensors.

The whole system has been co-opted and we need to fend for ourselves, and many alternative reporting sources are doing a great job of this.

This solar cycle news has been open knowledge for years now, warning us of some very real potential serious problems when it reaches its maximum, where we’re at now. Oddly it’s been a disappointment as far as intensity goes, but this magnetic shutdown is worth learning about. We’re still hearing about potential massive solar flares hitting that could cripple whole continents. And this is real. Even insider Michio Kaku has “predictively” been in the mainstream news talking about it, only to have the story shuffled into the subconscious once again.

Now we’re seeing upcoming massive grid failure drills, including the recent impromptu power outage in New York City that was no doubt some sort of test just recently. Then this great “Shake Out” supposed earthquake preparedness in the US heartland has now become an annual event and will also be taking place.

As if they care. Again, it’s conditioning. All based on fear and greater control. The programmed human outcry? “Save us. We need more security!” Please give us more controls for these uncontrollables!”

All this reminded me of this weirdly predictive movie once again. And appropriately it’s the SUN that brings the end!

Source: It was sent to TBU NEWS by anonymous reader