Is Trump getting back in bussines ? Hillary drops the advantage and leads Trump just by 1% 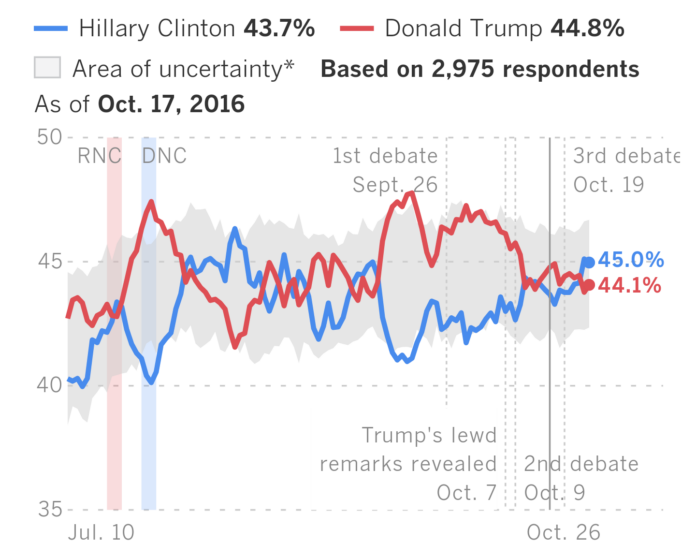 With 14 days to go until November 8, Hillary Clinton leads Donald Trump just by 1% points — 42% to 41% — in a four-way race, according to the latest IBD/TIPP presidential tracking poll.

Hillary has droped the advantage over Trump more then 6%. There is also LA Times whose predictions and measurements of public opinion show similar balance of power. According to LA Times, Clinton compared to Trump has the advantage of only 1% which is not a quite big margin between two candidates. As portrayed in these graphics LA Times predicts Trump’s future advantage over Clinton by that same 1%. It should be noted that LA Times is very well known for its methodology used when probing public opinion. According to them “stable and reliable” respondents are being surveyed.

Some opinion polls in the past presented by the very same LA Times where almost unmistakeably “clairvoyant”. Many experts stated that those polls where one of the most accurate in the previous race for the White House. LA Times was able to anticipate the re-election of Barack Obama as President of the United States with a margin of error that was absolutely negligible. According to LA Times polls, Obama was ahead of candidate Romney by 3.32%. Obama has achieved it’s victory with 3.85% of advantage. According to LA Times, Trump is in a continuous advantage over Clinton for nearly half a year.

Nigel Farage English politician and leader of euro skeptic movement UKIP that brought Britain from the EU said that Trump is a new opportunity and hope both for America and for the world. Farage also stated that during the UK referendum campaign all the British main stream polls agencies gave the clear advantage to “Stay campaign”, however those polls did not have any impact on the public opinion. Next morning Great Britain woke up out of the European Union.

During the UK referendum campaign Farage said “The will of the people is what it matters” and also stated that Americans should carefully consider to whome will they give their vote on November 8 elections.