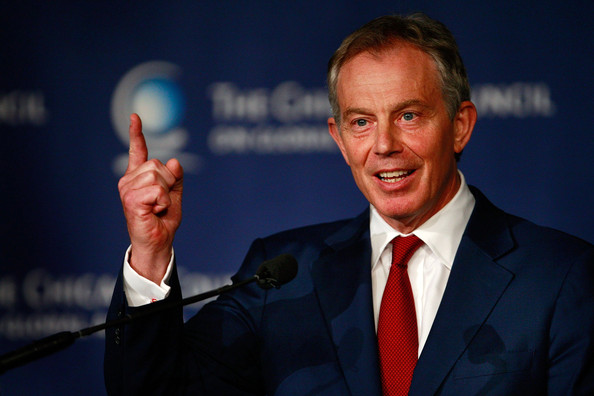 Former prime minister Tony Blair received a briefing about UFOs from the Ministry of Defence because of his concerns over the disclosure of classified information on alien life-forms.

Downing Street requested the advice for the PM in 1998 as the Freedom of Information Act was being introduced, which allowed the public to obtain information on alien mysteries.

Mr Blair’s concerns were raised after he received a letter from a member of the public referring to a ‘cover-up’ and asking him to make UFO reports and other information available.

According to The Daily Telegraph, Mr Blair sought advice from the MOD for their policy on the issue.

He was told by staff at the ministry that it has ‘only a limited interest in UFO matters’ but that they ‘ remained open-minded’ about ‘extraterrestrial life forms’.

Details of the briefing emerged yesterday ahead of today’s release of files by the Government of more than 6,700 pages detailing seemingly close encounters with UFOs over the last 30 years.

Among a series of UFO sightings in the files is a  policeman’s report of a mystery cluster of lights darting across the sky during an FA Cup replay between Chelsea and Manchester United.

The mounted officer’s claims to have seen the bright object hovering over Stamford Bridge in March 1999 for almost 15 seconds, slowly changing shape, were corroborated by a colleague.

The ‘credible witness report’ is one of a series investigated by the Ministry of Defence, whose top-secret files are being released in sections by the National Archives following the closure of the ministry’s UFO desk in 2009.

One confidential 1995 report by the defence official responsible for manning the desk says the presence of extra-terrestrial lifeforms is ‘possible’, although there is ‘no direct evidence’.

It also speculates on the reasons why aliens may be visiting Earth, including for military reconnaissance, scientific research, or just to enjoy the scenery and partake in some tourism.

He said a ‘square to almond shape’ yellow object with four lights floated silently above his horse.

Another file describes a West Wales hotelier who saw a UFO landed in a field. Two ‘faceless humanoids’ in silver suits emerged and took measurements.

One of the UK’s top UFO experts, Nick Pope, who worked at the MoD for 20 years, investigated reports of UFOs between 1991 and 1994, and says he began his research as a sceptic, before becoming convinced that the sightings raised important defence for national security and air safety issues.

Mass summer events like the upcoming Olympic Games in London would be a prime time for crafts from other worlds to present themselves to mankind, according to Mr Pope.

He said: ‘It has been a widely held belief in Ministry of Defence circles that “aliens” have been able to detect us for decades via TV and radio broadcasts.

‘What once seemed like science fiction is steadily being realised by central governing bodies as distinctly real.

‘If aliens have studied our psychology, they may choose to appear in our skies on a significant date – the closing ceremony of the Olympic Games is one date being widely circulated by conspiracy groups.”