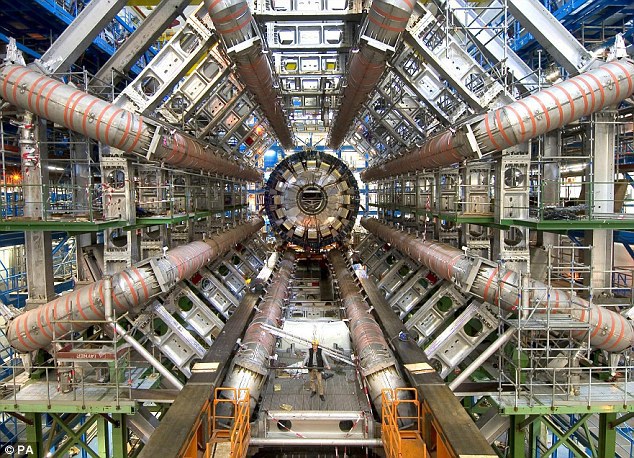 The hunt for the Higgs boson – the ‘God particle’ that holds the universe together – is over. Scientists at Switzerland’s CERN (the European Council for Nuclear Research) announced the discovery of the particle to an audience including Professor Peter Higgs, who first suggested the existence of the particle four decades ago. The discovery is the biggest leap in physics for decades – filling in the last gap in our understanding of physics. In the long term, the discovery could lead to new technologies. Professor John Womersley. chief executive of the Science and technology Facilities Council, said: ‘They have discovered a particle consistent with the Higgs boson. Discovery is the important word. That is confirmed. It’s a momentous day for science.’ Scroll down for live video Joe Incandela, spokesperson of the CMS experiment, announces the discovery of a particle that corresponds to theories of the Higgs boson at CERN today. The particle accelerator: It is within these tubes that physicists are hunting for the ‘God’ particle

WHY THE HIGGS MATTERS – WHAT THE NEW PARTICLE ACTUALLY MEANS

The existence of the Higgs boson was put forward in the 1960s to explain why the tiny particles that make up atoms have mass. The Higgs is the last missing piece of the Standard Model, the theory that describes the basic building blocks of the universe. The other 11 particles predicted by the model have been found – the Higgs is the last jigsaw piece. If the particle was shown not to exist, it would have meant tearing up the Standard Model and going back to the drawing board. Theory has it that as the universe cooled after the Big Bang, an invisible force known as the Higgs field formed. This field permeates the cosmos and is made up of countless numbers of tiny particles – or Higgs bosons.As other particles pass through it, they pick up mass. Any benefits in the wider world from the discovery of the Higgs boson will be long term, but they could be in fields as diverse as medicine, computing and manufacturing. Experts compare the search for the Higgs boson to the discovery of the electron. The idea of the electron – a subatomic particle – was first floated in 1838, but its presence was not confirmed for another 60 years. A century on, the electron’s existence underpins modern science. Our understanding of it is critical to the development of technology from television and CDs to radiotherapy for cancer patients.

The discovery fills in the last gap in the ‘standard model’ of physics – proving Einstein right, and possibly leading to new technologies built on our understanding of the particle. In December last year scientists at the Large Hadron Collider (LHC) – the ‘Big Bang’ particle accelerator which recreates conditions a billionth of a second after the birth of the universe – revealed they had caught a first tantalising glimpse of the Higgs. Since then they have sifted through vast quantities of data from innumerable high energy collisions in an effort to reduce the odds of being wrong. A statistical standard of proof known as ‘five sigma’ is the ultimate confirmation of a discovery. ‘We observe in our data clear signs of a new particle, at the level of 5 sigma, in the mass region around 126 GeV,’ said ATLAS experiment spokesperson Fabiola Gianotti, ‘but a little more time is needed to prepare these results for publication.’ ‘The results are preliminary but the 5 sigma signal at around 125 GeV we’re seeing is dramatic. This is indeed a new particle. We know it must be a boson and it’s the heaviest boson ever found,’ said CMS experiment spokesperson Joe Incandela. ‘The implications are very significant and it is precisely for this reason that we must be extremely diligent in all of our studies and cross-checks.’ ‘It’s hard not to get excited by these results,’ said CERN Research Director Sergio Bertolucci. ‘ We stated last year that in 2012 we would either find a new Higgs-like particle or exclude the existence of the Standard Model Higgs. With all the necessary caution, it looks to me that we are at a branching point.’ British physicist Peter Higgs arrives for the conference near Geneva Inside: The giant project is the most enormous piece of scientific apparatus ever constructed, and is buried 100m beneath the ground An aerial view of the Swiss-French border, indicating the route of the Large Hadron Collider

THE ‘GOD PARTICLE’ – WHY THE HIGGS HUNT CAUSED CONTROVERSY

The search for the particle caused controversy as members of the public feared that the high-energy collisions could cause a black hole or an interdimensional gateway in Switzerland. Religious groups also objected to the use of the term ‘God particle’ – although CERN’s scientists dislike the term just as much. Nobel prize-winning physicist Leon Lederman nicknamed the boson the ‘God particle’ in 1993 – which makes it popular in the media but has angered many scientists, including Professor Higgs himself.

At the LHC, scientists shoot two beams of protons – the ‘hearts’ of atoms – at each other round 27 kilometres of circular tunnels at almost the speed of light. When the protons smash together the enormous energies involved cause them to decay into an array of more fundamental particles. These may then decay further into yet more particles. Physicists needed the Higgs to plug a gaping hole in the ‘Standard Model’, the theory that explains all the particles, forces and interactions making up the universe. So far nothing has been observed to account for mass, and the fact that some particles weigh more than others. According to the theory, the Higgs boson is the emissary of an all-pervading ‘Higgs field’ that gives matter mass. The more particles interact with the field, the more massive they become and the heavier they are. A Standard Model universe without the Higgs boson could not exist. Everything would behave as light does, floating freely and not combining with anything else. There would be no atoms, made from conglomerations of protons, neutrons and electrons, no ordinary matter, and no us. Finding no evidence of the Higgs would mean tearing up the Standard Model and going back to the drawing board with a completely new set of theories.’