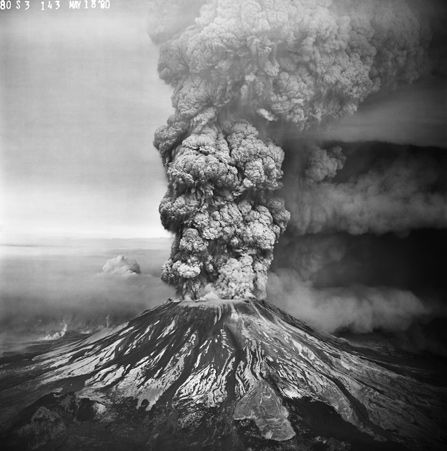 The ancients witnessed the awesome and raw power of erupting volcanos, and sent out warnings through time in the form of religion lessons, myths, legends and chronicles. These amazing, violent occurrences were so traumatic and unnatural (or supernatural) to early cultures that since prehistoric times myths and legends have sprung up throughout societies in attempts to explain the events, or protect against them. We continue to explore a few of the more explosive cases here.

Krakatoa – Heard Around the World A small eruption on Krakatoa in 2008. (Public Domain)

Indonesia has had its fair share of volcanic eruptions, but Krakatoa may be the most infamous in modern times. The volcano, sandwiched between Java and Sumatra, simply obliterated the area in a devastating cataclysm on August 27, 1883. The eruption was 13,000 times the power of an atomic bomb, and blew the peaks off the mountain, incinerated hundreds of nearby locals, triggered enormous mega-tsunamis which killed more than 36,000 people, and destroyed the majority of the island.

It was the loudest sound in modern history, and it was heard 3,000 miles (4,800 kilometers) away. The shockwaves themselves were detected and recorded around the world. Indeed, the resulting ash affected weather worldwide, cooling weather and affecting crops. Out of the ashes of the resulting caldera, a new island was formed in 1927 called Anak Krakatau, or the “Child of Krakatoa.”

This tremendous eruption was not Krakatoa’s first, however, as recorded in The Pararaton, also known as the Book of Kings, a Javanese chronicle of blended historical and mythical events. The chronicle tells of a thundering sound from the mountain Batuwara around 416 AD. The ground shook and heavy rains and storms pelted the region. Fire erupted from the mountain, and the noise was a terrible roar. The terrain fell into the “deepest parts of the earth”, and the water of the sea rose and covered the land, taking with it the people and their dwellings. Geologic evidence points to such an event around 535 AD. The Polynesian descendants who came to occupy New Zealand, known as the Maori, have many myths and legends surrounding their many rumbling volcanos.  Geological data places the volcanic activity of New Zealand back 60 to 130 million years, and minor eruptions continue to this day, a natural part of being on a fault in the Pacific Ring of Fire, where the largest amount of earthquakes and volcanic eruptions occur. New Zealand has been shaped by many large eruptions over the millennia, including supervolcano-sized events. 26,500 years ago the Oruanui eruption covered the central North Island in lava and ash 200 meters (650 feet) deep. The Taupo or Hatepe eruption of 180 CE caused an eruption column 50 kilometers (31 miles) high, and the skies of Rome and China turned red from the fire and ash in the sky.

Tales of the mountains and their chaotic behavior are explained in ancient myth. The indigenous people tell of the turbulent love-lives of the mountains Taranaki, Tongariro and Pihanga (or Ruapehu). It was said that the giants Taranki and Tongariro battled for the love of the beautiful Pihanga. They sprayed each other with scalding water and hurled stones, destroying the landscape. When Taranaki was defeated, he (as a giant or a mountain) abandoned the other two, and moved to the current location, near New Plymouth, where he plots his revenge.

The more recent eruption of Mount Tarawera in 1886 spawned cautionary tales. It was said that the people of Te Ariki village were punished with a painful death by volcanic eruption for eating forbidden honey. Those in the village who did not eat the special honey were miraculously spared.

Another warning came via the tale handed down about the Shaman named Ngatoro who left the village for a time to climb up a mountain. He advised his followers to not eat until his return.  After Ngatoro had been gone for a long time, the villagers believed him dead and broke their fast. The punishment for the disbelief and disobedience was a visit from angry fire demons bursting through the mountain summit, otherwise known as an erupting volcano. Angry fire demons remind you to listen to your elders. (Maxwell Hamilton/CC BY 2.0)

Kamchatka, Beauty and the Beasts Russia has a hotspot for volcanic activity in Kamchatka. Due to the Kuril-Kamchatka Trench, seismic events and tsunamis are common. The high density of volcanos, many still active in the region, makes it one of the most volcanically active locations in the entire world, behind Iceland and Hawaii.

The active volcanoes form a 700 kilometer long volcanic belt, and the 30 eruptions over the last 10,000 years have spewed 1 cubic kilometer of magma. Eruption of Klyuchevskoi volcano in Kamchatka, Russia in the summer of 1993. (Photo by Giorgio Galeotti / CC BY-SA 3.0)

Native peoples of this land are known as the Koryaks, Itelmens, Chukchis, and Tunguses tribes. Their mythology surrounding the destructive earth forces have been passed on generation after generation, as in other volcanic places around the globe. The creation myth of the Koryaks involved a great raven flying over the lands and dropping a feather, which became Kamchatka. It was believed when the creator made a woman, all the men of the land fell in love with her deeply. When they died they became mountains, and the mountains had still-burning hearts filled with fiery love for the woman.

The Itelmen are said to believe that all of nature—volcanoes, hot springs, trees mountains, water, etc— is inhabited by devils. When the devils are dissatisfied, hungry or bored, they will cause destruction, havoc, or death by lighting up the night with lava. Sources note that the Itelmen are said to have made sacrificial offers to assuage the demons, throwing bits of mean onto the mountains.

Dogs play an important role in Kamchatkan legend and myth, as it played a vital role in the lives of the early people as hunting partner and sled-dogs. Dogs were thought to have played a part in the creation of the world. The Itelmens say the mountains and valleys were formed when Kozei, the dog of the first ancestor, shook snow from his coat, an earthquake happened. A man rides a dogsled while the team pulls. A volcano, thought to be Tolbachik (Kamchatka), erupts in the background. 1790. (Public Domain)

The indigenous people of North America have many varied and colorful legends associated with seismic activity and volcanoes, even though there have been extremely few eruptions over the last 150 years. Volcanoes in this region are along the west mainland coast and famously active in Hawaii.

Mount St. Helens, which erupted May 18, 1980, is known for its dramatic ash explosions and pyroclastic flows of hot gas, and it destroyed its summit, killed people and destroyed homes. 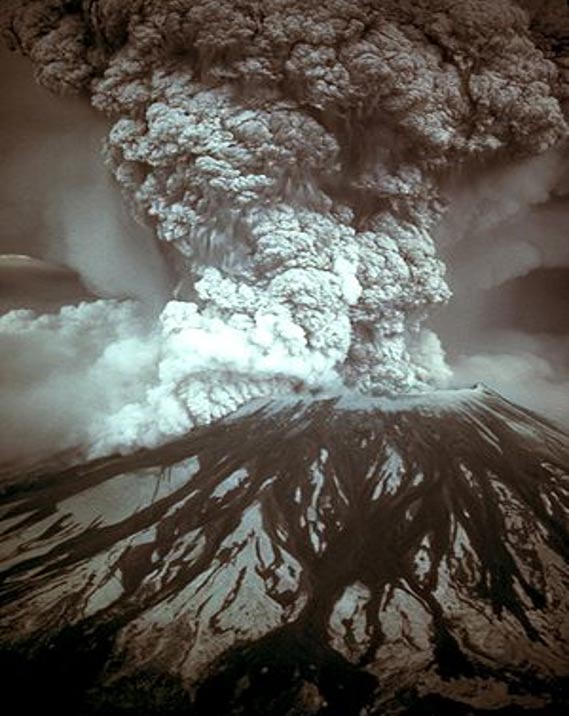 American Indian legends speak of the Mount St. Helens, as it is of scared importance to tribes in the area. They refer to the mountain as “Lawetlat’la”, or “the smoker.”

The ancestors of the Modoc natives of northern California have experienced the eruption of nearby Mount Shasta. Their oral tradition retells that the Chief of the Sky Spirits came down from the clouds and created the trees, rivers, fish and animals. When all was prepared, he brought his family and they lived in the mountains. The smoke and sparks from their fires were visible to all, and when the Chief stoked the fire with a large log the earth trembled. These tales serve to rationalize the irrationality and unpredictability of nature, and they provide a history lesson to descendants.

The Hawaiian Islands were formed of volcanoes over the past five million years, as they rest above fault lines of the earth’s crust. The islands themselves are merely the tops of giant mountains rising up from the floor of the ocean.