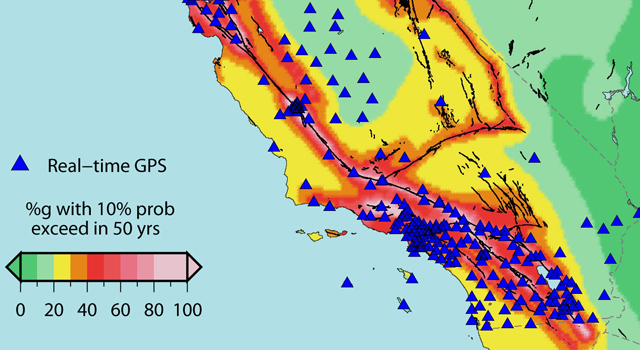 WASHINGTON — The space-based technology that lets GPS-equipped motorists constantly update their precise location will undergo a major test of its ability to rapidly pinpoint the location and magnitude of strong earthquakes across the western United States. Results from the new Real-time Earthquake Analysis for Disaster (READI) Mitigation Network soon could be used to assist prompt disaster response and more accurate tsunami warnings.

The new research network builds on decades of technology development supported by the National Science Foundation, the Department of Defense, NASA, and the U.S. Geological Survey (USGS). The network uses real-time GPS measurements from nearly 500 stations throughout California, Oregon and Washington. When a large earthquake is detected, GPS data are used to automatically calculate its vital characteristics including location, magnitude and details about the fault rupture.

“With the READI network we are enabling continued development of real-time GPS technologies to advance national and international early warning disaster systems,” said Craig Dobson, natural hazards program manager in the Earth Science Division at NASA Headquarters in Washington. “This prototype system is a significant step towards realizing the goal of providing Pacific basin-wide natural hazards capability around the Pacific ‘Ring of Fire.'”

Accurate and rapid identification of earthquakes of magnitude 6.0 and stronger is critical for disaster response and mitigation efforts, especially for tsunamis. Calculating the strength of a tsunami requires detailed knowledge of the size of the earthquake and associated ground movements. Acquiring this type of data for very large earthquakes is a challenge for traditional seismological instruments that measure ground shaking.

High-precision, second-by-second measurements of ground displacements using GPS have been shown to reduce the time needed to characterize large earthquakes and to increase the accuracy of subsequent tsunami predictions. After the capabilities of the network have been fully demonstrated, it is intended to be used by appropriate natural hazard monitoring agencies. USGS and the National Oceanic and Atmospheric Administration are responsible for detecting and issuing warnings on earthquakes and tsunamis, respectively.

“By using GPS to measure ground deformation from large earthquakes, we can reduce the time needed to locate and characterize the damage from large seismic events to several minutes,” said Yehuda Bock, director of Scripps Institution of Oceanography’s Orbit and Permanent Array Center in La Jolla, Calif. “We now are poised to fully test the prototype system this year.”

NASA, NSF, USGS, and other federal, state, and local partners support the GPS stations in the network, including the EarthScope Plate Boundary Observatory, the Pacific Northwest Geodetic Array, the Bay Area Regional Deformation Array and the California Real-Time Network.

“The relatively small investments in GPS-based natural hazards systems have revolutionized the way we view the Earth and allowed us to develop this prototype system with great potential benefits for the infrastructure and population in earthquake-prone states in the western United States,” said Frank Webb, Earth Science Advanced Mission Concepts program manager at JPL.

The READI network is the outgrowth of nearly 25 years of U.S. government research efforts to develop the capabilities and applications of GPS technology. The GPS satellite system was created by the Department of Defense for military and ultimately civil positioning needs. NASA leveraged this investment by supporting development of a global GPS signal receiving network to improve the accuracy and utility of GPS positioning information. Today that capability provides real-time, pinpoint positioning and timing for a wide variety of uses from agriculture to Earth exploration.

“Conventional seismic networks have consistently struggled to rapidly identify the true size of great earthquakes during the last decade,” said Timothy Melbourne, director of the Central Washington University’s Pacific Northwest Geodetic Array. “This GPS system is more likely to provide accurate and rapid estimates of the location and amount of fault slip to fire, utility, medical and other first-response teams.”
The GPS earthquake detection capability was first demonstrated by NASA-supported research on a major 2004 Sumatra quake conducted by Geoffrey Blewitt and colleagues at the University of Nevada in Reno.