The FBI is going to investigate new emails related to the case of Hillary Clinton’s personal email server after discovering “the existence of emails that may be pertinent to the investigation,” according to a letter from FBI Director James Comey. 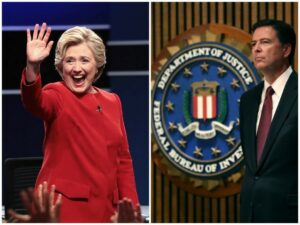 In total, more than 30,000 emails were deleted – WHY? After a year-long investigation, the FBI recovered more than 17,000 emails that had been deleted or otherwise not turned over to the State Department, and many of them were work-related and classified in nature, the FBI has said.

“WikiLeaks series on deals involving Hillary Clinton campaign Chairman John Podesta. Mr Podesta is a long-term associate of the Clintons and was President Bill Clinton’s Chief of Staff from 1998 until 2001. Mr Podesta also owns the Podesta Group with his brother Tony, a major lobbying firm and is the Chair of the Center for American Progress (CAP), a Washington DC-based think tank.”

The one question that still remains is If Clinton Campaign Believes WikiLeaks Emails Are Forged, Why Don’t They Prove It?

As time passes by it seems that FBI help is going to be needed to give an answer to WikiLeaks emails too. But first let’s see what will be the FBI official conclusion on this one?