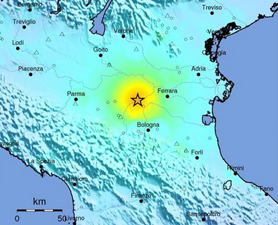 May 24.2012 – A strong and unusually shallow earthquake struck northern Italy over the weekend, fracturing pavement, sending torrents of brick and rubble raining down from buildings, and killing seven people. The powerful shaking was a first for the region in centuries — and fairly surprising to seismologists.

Data indicate the magnitude 6.0 quake, which struck just after 4 a.m. local time on Sunday (May 20), just north of Bologna, was a thrust quake — the type of earthquake caused when two tectonic plates smash together — yet it occurred at a depth of just 3 miles (5 kilometers).

“It is kind of surprising that it’s that shallow, because it’s pretty far from the plate boundary,” said Paul Caruso, a geophysicist with the U.S. Geological Survey. “Normally we expect things to get deeper as they move northward,” he told OurAmazingPlanet.

The quake hit about 470 miles (750 km) north of the plate boundary — the place where the two colliding plates meet — which runs along the sole of Italy’s “boot.”

It is here that the African plate is plowing slowly northward, crashing into the Eurasian plate.

Caruso explained that the shallower a quake, the more damage it can cause. “If a quake is 500 kilometers deep, and you’re right on top of it, you’re going to feel it a lot less strongly than if it’s 5 kilometers deep,” he said. “As the seismic energy moves through the ground some of it is dissipated.”

The strong quake rocked an area with a long history of earthquakes, yet one that has kept relatively quiet for hundreds of years.

“There has not been a whole lot of action in that area,” Caruso said. “The fact that they do have records of earthquakes going back a couple thousand years shows this area hasn’t been seismically active for a long time,” he said.

Thousands of people were displaced by the quake, and many people spent the night in tents hurriedly erected on soccer fields.

The most powerful quake to hit Italy in decades occurred in 2009, in central Italy, near Rome. The 6.3-magnitude earthquake struck the medieval city of L’Aquila, killing close to 300 people and causing widespread damage.

After that earthquake, Italian officials put several Italian scientists on trial for manslaughter for not providing better warnings ahead of the deadly shaking, a move that has caused an outcry in the international scientific community.