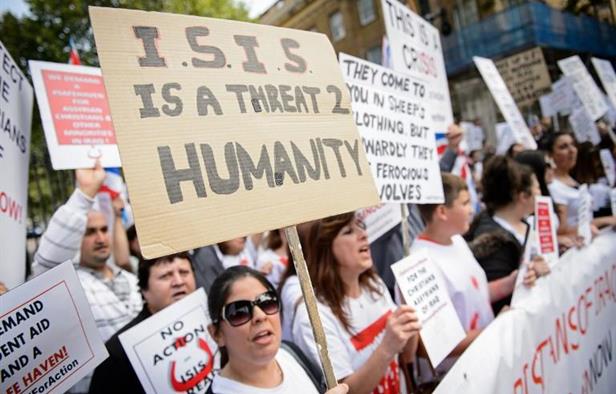 After the UN Security Council last weekend unanimously called on all states able to do so to join the battle against the jihadi caliphate in Syria and Iraq, one might suppose global and regional powers were at last lining up and pointing in the same direction.

President François Hollande, has placed France on a war footing after the Isis assault on Paris on November 13, has embarked on a diplomatic offensive to create a global coalition against ISIS.

-Russia has already started to bomb ISIS targets all around Syria and cutting they main source of funding “Oil”.

Russia is focused on destroying the terrorists’ economic base.

“We stopped supplies of 60,000 tons of oil per day to the black market and terrorists are losing $1.5 million daily,” Shoigu said.

This is what has came from Washington:

Oh my god this is so offensive and this story is not believable to a 5 years old child. It is good that comes from a former US official not acting one. But once CIA always CIA.

Or maybe US is preparing for Climate change summit that will be held on Monday.

Let’s get back to story…

-Obama and Hollande announced they would intensify their air raids against ISIS, and urged Russia to focus its military efforts against the group. 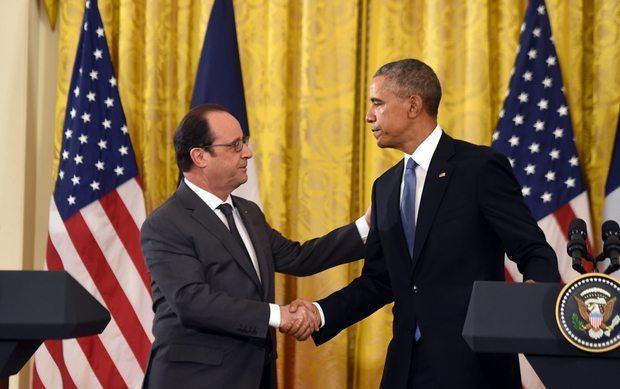 This is what the President of United States Barack Obama said during the official visit of French president Francois Hollande that took place in Washington on 24th of November:

” This barbaric terrorist group — ISIL, or Daesh — and its murderous ideology pose a serious threat to all of us.  It cannot be tolerated.  It must be destroyed.  And we must do it together.  This is the unity of purpose that brings us here today.”

” This was not only a strike against one of the world’s great cities, it was an attack against the world itself.  It’s the same madness that has slaughtered the innocent from Nigeria to the Sinai, from Lebanon to Iraq.  It is a scourge that threatens all of us.  And that’s why, for more than a year, the United States, France, and our coalition of some 65 nations have been united in one mission — to destroy these ISIL terrorists and defeat their vile ideology.”

“We agree that Russia could play a more constructive role if it were to shift the focus of its strikes to defeating ISIL.”

The whole transcript of the press conference can be read at whitehouse.gov.

France President didn’t just stopped by France he also visited his greatest aly in a fight against ISIS Russia.

And this is what has being said:

Hollande – “We all suffer from terrorism. Terrorism can strike in any part of the world, so it is critical to act. And this is the whole point of our meeting in Moscow. We must respond together. Last week, the UN Security Council unanimously adopted a resolution that all countries in the world should take the necessary measures to coordinate their efforts to eliminate the Islamic State, and we must pursue this process. This is the most important reality in today’s world, that is, a broad coalition, to which France will also be a party, a global coalition in the fight against terror. This consensus is essential, but it is not enough. We also need to assume responsibility. This is precisely what France is doing when it attacks ISIS operations centres, when it attacks the oil wells that the terrorists use to smuggle oil and obtain financial resources. We intensified our efforts. We deployed the aircraft carrier Charles de Gaulle to the Mediterranean and we’ve done everything we can to ensure that our military will be actively involved in eliminating ISIS.”

Hollande has stressed that EU is mobilizing its own forces to combat terrorism:

“Let me emphasise that Europe is about to mobilise its forces to combat terrorism. I would like to ask defence ministers from across Europe to take the necessary decisions for coordinating their actions. The United Kingdom will also participate. I spoke with Mr Cameron about this. I also discussed a number of issues with Ms Merkel yesterday.”

Putin – “We have already intensified the Russian Armed Forces operation against terrorists in Syria. Our military actions are effective; militants from the so-called Islamic State and other radical groups are suffering heavy losses. We have disrupted the extremists’ operating mechanisms, damaged their military infrastructure and significantly undermined their financial base – I am referring first and foremost to illicit trade in oil, which generates immense profits for the terrorists and their sponsors.Those who apply double standards when dealing with terrorists, using them to achieve their own political aims and engaging in unlawful business with them, are playing with fire. History shows that sooner or later such actions will backfire against those who abet criminals.”

So Putin gives a direct warning to those who aid ISIS you will fail. Putin also stressed that he wants US to be a part of this global coalition against ISIS but :

“Regarding the coalition, President Hollande and I discussed this issue today. We respect the coalition the United States is heading and are ready to work with this coalition. We think it would be best to establish a unified, common coalition. This would make it simpler and easier, and, I think, more effective to coordinate our common efforts in this situation. But if our partners are not ready for this… In fact, this was what I spoke about at the UN. But if our partners are not ready for this, fine, we are ready to work in other formats, in whatever format our partners would find acceptable. We are ready to cooperate with the US-led coalition.”

The full transcript of this press conference can be read at en.kremlin.ru.

As we can see US stands against ISIS but as long as Asad is on power their support is going to be minimal but is it just Asad are there any other interest involved like oil supremacy, arms trading every instability is lucrative for business especially arms, smuggling and similar? But let’s not talk about those…because it is so wide open that ISIS is going down there is no dilemma and with the help of United States it only depends how fast and what way is going to be used.

We must not forget that US had some issues with Russia on Syri and Ukraine right now US is trying to find a way to join the fight but to protect their interest and to keep their story and their stance firm.

Maybe we are not going to see Russia and USA arm to arm but eventually we are going to se two coalitions against ISIS one west predominated and one Russia, Syria Iran…(lets not forget Israel their role is of outmost importance). It is not so bad idea just hope that it will come in motion. If not we could see the instability widening , terrorism spreading and maybe in the future a conflict of wide proportions with no measurable consequences.

Right now the world has changed people have changed but there are two sides and two dualities of everything a balance in a way, but also dangerous one because those dualities are going to their extrema and that is also not good.

We should all strive to a middle point if not extrema of those dualities will drive us all into a conflict.