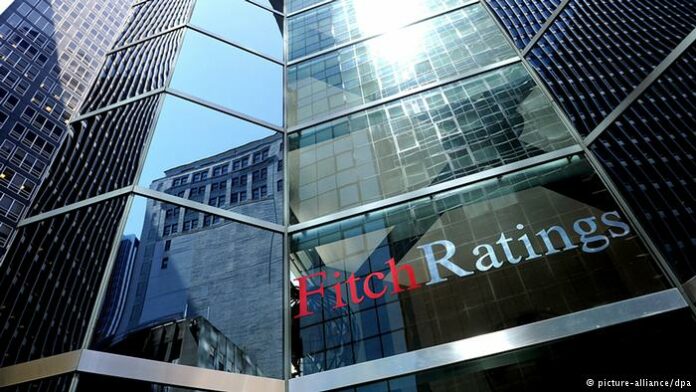 The ratings agency cut the country to BBB- from BBB with a negative outlook, meaning further downgrades are possible.

But it was the language Fitch used in its reasoning that was most shocking.

Western sanctions, imposed after President Vladimir Putin’s took Russia into neighbouring Ukraine, “continue to weigh on the economy” but the plunging oil price is causing just as much, if not more, damage to one of the world’s energy giants.

Source and Read full article at;
The Telegraph

Fitch Ratings-New York/London-09 January 2015: Fitch Ratings has downgraded Russia’s Long-term foreign and local currency Issuer Default Ratings (IDR) to ‘BBB-‘ from ‘BBB’. The issue ratings on Russia’s senior unsecured foreign and local currency bonds have also been downgraded to ‘BBB-‘ from ‘BBB’. The Outlooks on the Long-term IDRs are Negative. The Country Ceiling has been lowered to ‘BBB-‘from ‘BBB’. The Short-term foreign currency IDR has been affirmed at ‘F3’.
KEY RATING DRIVERS
The downgrade reflects the following factors and their relative weights:

HIGH
The economic outlook has deteriorated significantly since mid-2014 following sharp falls in the oil price and the rouble, coupled with a steep rise in interest rates. Western sanctions first imposed in March 2014 continue to weigh on the economy by blocking Russian banks’ and corporates’ access to external capital markets. Having grown by just 0.6% in 2014, Fitch now expects the economy to contract by 4% in 2015, compared with our previous forecast of minus 1.5%, as steep falls in consumption and investment are only partially offset by an improvement in net exports, driven by a sharp drop in imports. Growth may not return until 2017.

Plunging oil prices have exposed the close link between growth and oil prices, notwithstanding the impact of a more flexible exchange rate. For 2015, Fitch is assuming oil prices average USD70/bbl, markedly lower than the USD100/bbl we assumed in July 2014. If the oil price stays well below this, it could precipitate a deeper recession and put further strain on public finances, severely limiting the authorities’ room for manoeuvre.

Rouble depreciation, intense market volatility and sharp hikes in policy rates to 17% from 10% constitute a major shock to the banking sector. The authorities have stepped in to preserve financial stability, doubling the cap on insured deposits, offering subordinated loans from the National Wealth Fund to systemically important banks with at least RUB100bn of equity and offering other banks up to RUB1trn of non-cash subordinated loans. Given the pressure on capital ratios and asset quality, the sovereign may have to pay for further bank support. Regulatory forbearance will mitigate the impact on banks’ reported balance sheets of the sharp fall in the rouble and decline in the value of securities portfolios.

MEDIUM
International reserves, the sovereign’s stock of liquid foreign assets, have fallen faster than Fitch expected and they remain on a declining trend. A key development since the last rating review has been the accelerated transition to a freely floating exchange rate, ahead of the introduction of formal inflation targeting on 1 January. This move has slowed the depletion of international reserves and cushioned the public finances from falling oil prices. Nonetheless, reserves ended the year at less than USD390bn, down more than USD120bn from end-2013 and lower than our previous forecasts of USD450bn by end-2014 and USD400bn by end-2015.

Reserves/M2, a measure of the economy’s ability to cope with capital flight, stand at around 50%, while the stock of reserves relative to liquid external liabilities is still robust at 220%. Fitch is forecasting a rebound in the current account surplus from USD55bn (2.9% of GDP) in 2014 to USD72bn (5.3% of GDP) in 2015 as imports shrink. Nevertheless, in the absence of renewed access to international capital markets and based on the assumption of net private capital outflows of USD130bn (including net debt repayments) Fitch expects reserves to decline to around USD315bn by end-2015.

Per capita income in US dollar terms is likely to shrink by over one-quarter one-third in 2015, illustrating the blow to national income and debt tolerance from the oil price shock and rouble depreciation.

Inflation ended 2014 at 11.4% y-o-y and is likely to remain in double digits throughout 1Q15, pointing to falling real incomes and depressed domestic demand. In light of recent trends, the prospects of the CBR realising its end-2015 inflation target of 4.5% now look remote, particularly if the exchange rate falls further, potentially leading to still higher interest rates. Fitch forecasts end-2015 inflation of 8.5%.

Economic policy coherence and credibility in the face of external shocks remain important supports for the rating. The authorities have acted swiftly in raising interest rates and supporting the financial sector and plan early revisions to the 2015 budget. However, Fitch expects the policy framework to come under growing pressure as external vulnerabilities weigh on the macroeconomic outlook.

Russia’s starting position remains strong: the policy framework is robust, public debt is low (estimated at 12.4% of GDP at end-2014) and the sovereign net foreign asset (SNFA) position is still appreciable (20% of GDP). However, sovereign wealth funds are lower now (USD169bn, or 12% of expected 2015 GDP) than they were in 2008 (16% of GDP), while the broader SNFA position has also deteriorated. Moreover, the longer sanctions remain in place, the greater the risk of non-sovereign external liabilities migrating to the sovereign balance sheet and eroding these rating attributes.

Renewed intervention to support the rouble, whether by the Central Bank (CBR) or the Finance Ministry, could further reduce reserves, as would rising levels of dollarisation in the face of financial sector instability. Renewed bouts of chronic exchange rate volatility would also raise the spectre of exchange controls. The authorities continue to rule out capital controls but have applied moral suasion, compelling state-owned exporters to convert foreign exchange revenues into roubles, for example.

Extraordinary financial sector support of Rs1trn (1.4% of GDP) has transformed an expected 2014 federal budget surplus of 0.4% of GDP into a deficit of 1%. The revised 2015 budget is expected to be based on an oil price of USD60/bbl and is likely to entail expenditure cutbacks across the board. Nonetheless, some deterioration in the fiscal metrics is to be expected, challenging adherence to the 2012 fiscal rule. Fitch is forecasting a general government deficit of 3.7% of GDP in 2015 (up from 1.5% in 2014). Part of this will be met from the Reserve Fund, illustrating the sovereign’s significant (if declining) fiscal financing flexibility.

External deleveraging is running at its highest level since 2009 as banks and corporates make net repayments in the face of near complete exclusion from international capital markets. Consequently, Fitch estimates that Russia’s net external creditor position stood at 15% of GDP in 2014, virtually unchanged from 2013, as both external liabilities and reserves declined. Data on roll-over rates is limited. However, given the share of inter-company lending to the non-bank sector, it would not be unreasonable to assume that up to a third of this sector’s liabilities are being rolled over by parent entities.

Structural factors are weak relative to peers. Commodity dependence is high: energy products account for almost 70% of merchandise exports and 50% of federal government revenue, exposing the public finances and the balance of payments to external shocks. Governance is a relative weakness: Russia scores badly on World Bank and Transparency International indicators, for example. Russia’s current predicament has done little to hasten the onset of a more liberal economic policy agenda and raises the risk of greater isolationism. The business environment has long hampered diversification outside the energy sector.

The Outlook is Negative. Consequently, Fitch’s sensitivity analysis does not currently anticipate developments with a high likelihood of leading to a positive rating change.

Future developments that could individually, or collectively, result in a stabilisation of the Outlook include:
– A reduction in tensions with the international community, resulting in an unwinding of sanctions and renewed access for Russian entities to international capital markets
– A sustained recovery in the oil price, coupled with an easing of macroeconomic and financial stress

KEY ASSUMPTIONS
Russia’s ratings are based on a number of key assumptions:
– Fitch prepared its forecasts on the basis that the (Brent) oil price averages USD70/bbl in 2015 and USD80/bbl in 2015
– Fitch assumes that Russia continues to experience broad social and political stability