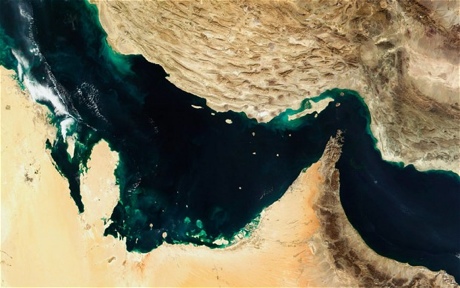 An armada of US and British naval power is massing in the Persian Gulf in the belief that Israel is considering a pre-emptive strike against Iran’s covert nuclear weapons programme.

Battleships, aircraft carriers, minesweepers and submarines from 25 nations are converging on the strategically important Strait of Hormuz in an unprecedented show of force as Israel and Iran move towards the brink of war.
Western leaders are convinced that Iran will retaliate to any attack by attempting to mine or blockade the shipping lane through which passes around 18 million barrels of oil every day, approximately 35 per cent of the world’s petroleum traded by sea.
A blockade would have a catastrophic effect on the fragile economies of Britain, Europe the United States and Japan, all of which rely heavily on oil and gas supplies from the Gulf.
The Strait of Hormuz is one of the world’s most congested international waterways. It is only 21 miles wide at its narrowest point and is bordered by the Iranian coast to the north and the United Arab Emirates to the south.
In preparation for any pre-emptive or retaliatory action by Iran, warships from more than 25 countries, including the United States, Britain, France, Saudi Arabia and the UAE, will today begin an annual 12-day exercise.

The war games are the largest ever undertaken in the region.
They will practise tactics in how to breach an Iranian blockade of the strait and the force will also undertake counter-mining drills.
The multi-national naval force in the Gulf includes three US Nimitz class carrier groups, each of which has more aircraft than the entire complement of the Iranian air force.

The carriers are supported by at least 12 battleships, including ballistic missile cruisers, frigates, destroyers and assault ships carrying thousand of US Marines and special forces.
The British component consists of four British minesweepers and the Royal Fleet Auxiliary Cardigan Bay, a logistics vessel. HMS Diamond, a brand-new £1billion Type 45 destroyer, one of the most powerful ships in the British fleet, will also be operating in the region.

In addition, commanders will also simulate destroying Iranian combat jets, ships and coastal missile batteries.
In the event of war, the main threat to the multi-national force will come from the Islamic Revolutionary Guards Corps navy, which is expected to adopt an “access-denial” strategy in the wake of an attack, by directly targeting US warships, attacking merchant shipping and mining vital maritime chokepoints in the Persian Gulf.
Defence sources say that although Iran’s capability may not be technologically sophisticated, it could deliver a series of lethal blows against British and US ships using mini-subs, fast attack boats, mines and shore-based anti-ship missile batteries.
Next month, Iran will stage massive military manoeuvres of its own, to show that it is prepared to defend its nuclear installations against the threat of aerial bombardment.
The exercise is being showcased as the biggest air defence war game in the Islamic Republic’s history, and will be its most visible response yet to the prospect of an Israeli military strike.
Using surface-to-air missiles, unmanned drones and state-of-the-art radar, Iran’s Revolutionary Guards and air force will combine to test the defences of 3,600 sensitive locations throughout the country, including oil refineries and uranium enrichment facilities.
Brigadier General Farzad Esmaili, commander of the Khatam al-Anbiya air defence base, told a conference this month that the manoeuvres would “identify vulnerabilities, try out new tactics and practise old ones”.
At the same time as the Western manoeuvres in the Gulf, the British Response Task Forces Group — which includes the carrier HMS Illustrious, equipped with Apache attack helicopters, along with the French aircraft carrier Charles de Gaulle – will be conducting a naval exercise in the eastern Mediterranean. The task force could easily be diverted to the Gulf region via the Suez Canal within a week of being ordered to do so.
The main naval exercise comes as President Barack Obama is scheduled to meet Benjamin Netanyahu, the Israeli prime minister, today to discuss the Iranian crisis.
Many within the Obama administration believe that Israel will launch a pre-emptive strike against Iran’s nuclear facilities before the US presidential elections, an act which would signal the failure of one of Washington’s key foreign policy objectives.
Both Downing Street and Washington hope that the show of force will demonstrate to Iran that Nato and the West will not allow President Mahmoud Ahmadinejad, the Iranian leader, to develop a nuclear armoury or close Hormuz.
Sir John Sawers, the head of MI6, the Secret Intelligence Service, reportedly met the Israeli prime minister and Ehud Barak, his defence secretary, two weeks ago in an attempt to avert military action against Iran.
But just last week Mr Netanyahu signalled that time for a negotiated settlement was running out when he said: “The world tells Israel ‘Wait, there’s still time.’ And I say, ‘Wait for what? Wait until when?’
“Those in the international community who refuse to put red lines before Iran don’t have a moral right to place a red light before Israel.”
The crisis hinges on Iran’s nuclear enrichment programme, which Israel believes is designed to build an atomic weapon. Tehran has long argued that the programme is for civil use only and says it has no plans to an build a nuclear bomb, but that claim has been disputed by the West, with even the head of MI6 stating that the Islamic Republic is on course to develop atomic weapons by 2014.
The Strait of Hormuz has long been disputed territory, with the Iranians claiming control of the region and the entire Persian Gulf.
Rear Admiral Ali Fadavi of the Iranian Revolutionary Guard Corps recently boasted that “any plots of enemies” would be foiled and a heavy price exacted, adding: “We determine the rules of military conflict in the Persian Gulf and the Strait of Hormuz.”
But Leon Panetta, the US defence secretary, warned that Iranian attempts to exercise control over the Strait of Hormuz could be met with force.
He said: “The Iranians need to understand that the United States and the international community are going to hold them directly responsible for any disruption of shipping in that region — by Iran or, for that matter, by its surrogates.”
Mr Panetta said that the United States was “fully prepared for all contingencies” and added: “We’ve invested in capabilities to ensure that the Iranian attempt to close down shipping in the Gulf is something that we are going to be able to defeat if they make that decision.”
That announcement was supported by Philip Hammond, the Defence Secretary, who added: “We are determined to work as part of the international community effort to ensure freedom of passage in the international waters of the Strait of Hormuz.”
One defence source told The Sunday Telegraph last night: “If it came to war, there would be carnage. The Iranian casualties would be huge but they would be able to inflict severe blows against the US and British.
“The Iranian Republican Guard are well versed in asymmetrical warfare and would use swarm attacks to sink or seriously damage ships. This is a conflict nobody wants, but the rhetoric from Israel is unrelenting.”

Source and read more at:
http://www.telegraph.co.uk/news/worldnews/middleeast/iran/9545597/Armada-of-British-naval-power-massing-in-the-Gulf-as-Israel-prepares-an-Iran-strike.html