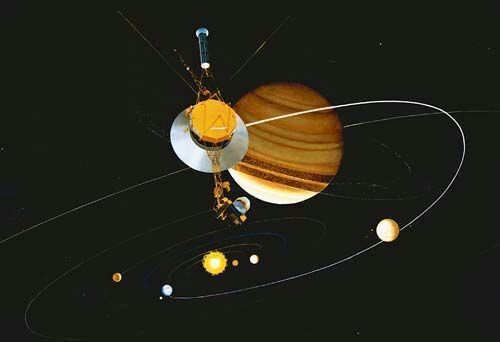 New research pinpoints the current location of NASA’s Voyager 1 spacecraft: It’s still in our solar system.
Since last summer, the long-running spacecraft has been exploring uncharted territory where the effects of interstellar space, or the space between stars, can be felt. Scientists don’t know how thick this newfound region in the solar system is or how much farther Voyager 1 has to travel to break to the other side.”It could actually be anytime or it could be several more years,” said chief scientist Ed Stone of the NASA Jet Propulsion Laboratory, which manages the mission.

Stone first described this unexpected zone at a meeting of the American Geophysical Union last year. A trio of papers published online Thursday in the journal Science confirmed just how strange this new layer is.Soon after Voyager 1 crossed into this region last August, low-energy charged particles that had been plentiful suddenly zipped outside while high-energy cosmic rays from interstellar space streamed inward.

Readings by one of Voyager 1’s instruments showed an abrupt increase in the magnetic field strength, but there was no change in the direction of the magnetic field lines – a sign that Voyager 1 has not yet exited the solar system.Voyager 1 and its twin, Voyager 2, were launched in 1977 to visit the giant gas planets, beaming back dazzling postcards of Jupiter, Saturn and their moons. Voyager 2 went on to tour Uranus and Neptune. After planet-hopping, they were sent on a trajectory toward interstellar space.Voyager 1 is about 11 1/2 billion miles from the sun. Voyager 2 is about 9 1/2 billion miles from the sun. The nuclear-powered spacecraft have enough fuel to operate their instruments until around 2020.

Read and find out more at: HUFFINGTONPOST