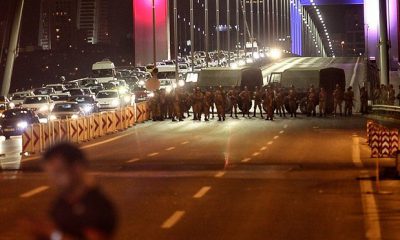 Turkish military is taking control over the country in one planed and very organized way. This large military action has been done swiftly and with determination.

Army has sized all vital government institutions. Television, Airport, government buildings, army headquarters, Parliament, all of the bridges are being blocked and social network has been shut down. Army jets are seen to roam over the skyes of Ankara.

Army has made an official statement over tv broadcast that contry has been taken completely. Army official have told that they are trying to restore the constitutional rights , human rights and fredoom for Turkish  people.

There where reports that Erdogan has left the country but later he spoke on face time with media. Nobody can determine where he is . Army is in search to arest him.

United Nations has confirmed that military coup is underway.

Army imposes curfew and marital law nation wide. Army states that they are doing this because they want the rule of law back and to stop the rising terrorism. Is this the end of ISIS.

Military has closed all the airport’s in the country. There are reports that there are some gunfire and clashes between the military and police.Erdogan calls for people to defend him and threatens the army that they will pay heavy price.

Turkish Parliament building has been sorounded by thanks. There are reports that the tanks opened fire. the gunshots and explosions can be heard. Erdogan calls for people to defend him.

Turkish Military says that has taken the country completely.

There are reports of powerful explosions in Ankara.

There are first casualties reported durring the shooting on the Bosphorus bridge. Helicopters flying low over Ankara. Reportedly at least 17 policeman have been killed during the gunshots exchange in tonights coup that is still underway.

There are some unofficial reports that police and army are not fighting each other and in some cases it has bee said that they are cooperating with each other . Pro Erdogan forces have reported that they have shoot down the military jet

Supporters of President Erdogan are being gathering on the streets of Ankara.

Military has deployed thanks near the Istanbul and Ankara airport’s. All flights are cancelled. Turkish Military has stated that the army has sized the country in full.

There are some unofficial and unconfirmed  reports that the Parliament building has been bombed. Supporters of Erdogan are still gathering.

Turkish Prime Minister said that 2,839 soldiers and officers implicated in an overnight coup attempt have been arrested. At least 265 people have been killed, including 104 pro-coup participants, while 1,440 people were injured in military action in Istanbul and Ankara. According to Prime Minister Binali Yildirim, those arrested included ordinary soldiers and high-ranking officers. He added that about 20 of those who planned the overnight coup were killed and 30 more were wounded.

General Hulusi Akar, who heads Turkey’s armed forces, has been rescued from rebel captivity. He was the most senior military official in their hands.

The rebels reportedly have several helicopter gunships in their disposal, but loyalists have threatened to shoot them down as they downed at least one aircraft carrying out attacks on government buildings.

President Recep Tayyip Erdogan called on his civilian supporters to take to the streets of Istanbul, which they did. Rebel soldiers, who called on the population to stay indoors, apparently didn’t have the resolve to launch a full-scale war against civilians in Turkey’s biggest city.

Government officials accused Fethullah Gulen, an influential cleric in self-imposed exile in the United States, of instigating the plot. Gulen used to be an ally of Erdogan, but turned into his fierce opponent.

In 2013, Turkey was shaken by a corruption scandal involving senior government figures. Erdogan claimed it had been set up by Gulen and launched a crackdown on his supporters in the police and judiciary.

Even though Erdogan appears to have kept his hold on power, the coup attempt is a clear signal that some of his policies are badly failing, Sreeram Chaullia from the Jindal School of International Affairs told RT.

Under his watch, Turkey has picked a fight with Kurdish insurgents, contributed to the chaos in Syria and Iraq, antagonised Iran and Russia, and to some extent made Turkey a liability to NATO, he explained.

“I have a feeling that this coup is linked to the security crisis. A series of terrorist attacks signal the inability of the Turkish government to stop these attacks. It has angered some sections of the security establishment that believe that they can do a better job because Erdogan is just playing politics with everything,”

Mr Erodogan said that the coup leaders would “pay a heavy price” as his ally and deputy prime minister Mehmet Müezzinoğlu announced that the government is considering bringing back the death penalty for the plotters.

“This uprising is a gift from God to us because this will be a reason to cleanse our army,”

Hours earlier, Erdogan – who has habitually accused Gulen, and his popular Hizmet movement, of trying to overthrow him, ever since the two former allies fell out in 2013.

“There is a possibility that it could be a staged coup, by Mr Erdogan’s AKP Party, and it could be meant for further accusations, against the Gulenists and the military,” Fathullah Gulen, who is in exile in Pennsylvania, told the media Saturday.

Turkish “Valkyrie” has finished. What is to come we do not know. But uncertainties are rising not just in Turkey but all over the world.