HAS TIME COME FOR LAW AND ORDER? 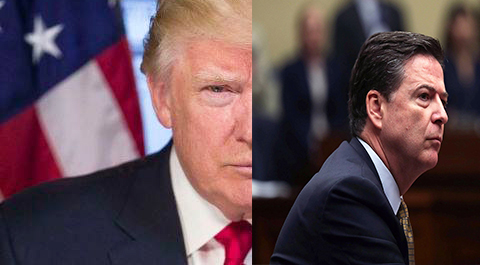 The President of the United States of America Donald J. Trump stated – “James Comey will be replaced by someone who will do a far better job, bringing back the spirit and prestige of the FBI. The Democrats have said some of the worst things about James Comey, including the fact that he should be fired, but now they play so sad! Comey lost the confidence of almost everyone in Washington, Republican and Democrat alike. When things calm down, they will be thanking me! The Russia-Trump collusion story is a total hoax, when will this taxpayer funded charade end?”

Earlier: President of the United States of America Donald J. Trump has fired FBI Director James Comey – The White House made the stunning announcement shortly after the FBI corrected a sentence in Comey’s sworn testimony on Capitol Hill last week.
The director told lawmakers that Huma Abedin, when a top aide to Hillary Clinton at the State Department, had sent “hundreds and thousands” of emails to her husband’s laptop, including some with classified information.

On Tuesday, the FBI said in a two-page letter to the Senate Judiciary Committee that only “a small number” of the thousands of emails found on the laptop had been forwarded there while most had simply been backed up from electronic devices.
Most of the email chains on the laptop containing classified information were not the result of forwarding, the FBI said.