The End of Syriza 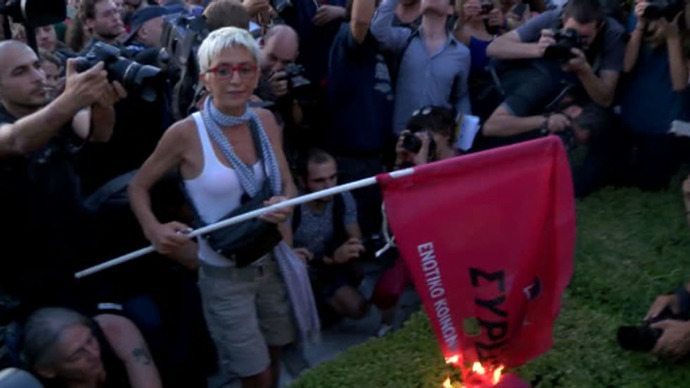 Greek banks have reopened after weeks of closure. The patient and orderly way customers queued outside to use ATMS during the big shut down was an impressive sight, especially for those people who are fond of considering Greek people as somehow incapable of doing things right.

But nothing is harmonious. The queues outside the job centres are as long as ever, while many of the shops that shut down at the same time as the banks, still haven’t reopened. Anti-austerity and anti-governmental protests have started to take place for the first time since Syriza came to power. Dozens were arrested as the Greek parliament voted to accept a new bailout deal from Europe, based on the very terms that were rejected just days earlier in a national referendum. Fresh riots took place as the parliament passed a law that allows the confiscation of people’s homes.

As Syriza burns its bridges with the general public, life for the majority of people has returned to hopeless normality – indeed, many people have spent more time talking about the wildfires that have broken out around the country than the troika in the past few days.

Greece’s ruling party might be called the coalition of the radical left but it seems to be rejecting a basic argument put forward by activists at that end of the political spectrum for years: It is impossible to transform this unequal, structurally and physically violent world into a better place if you try to do it via the institutional route. State governance, the parliamentary system, prime ministerial meetings and the rest are all the enemies of meaningful change.

Perhaps to a certain extent Syriza’s leaders were aware of the risks they were taking when they sought to continue negotiating with Europe. They could end up crossing the political spectrum to join the rest of the austerity governments or, less likely, be overthrown for failing to comply with the requests of creditors and international bankers.

Source and read more at: Greece.Greekreporter.com