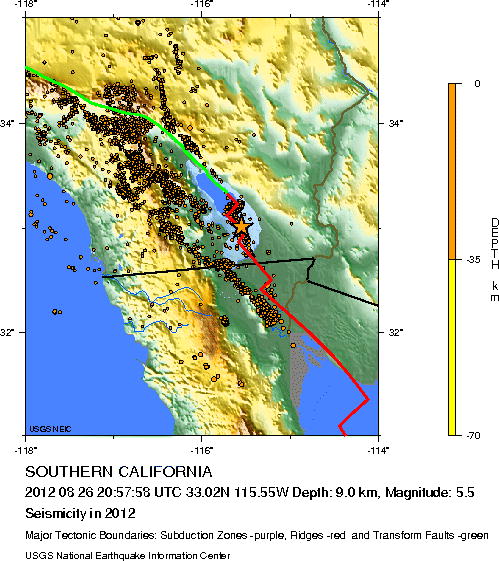 The series of moderate earthquakes — including several magnitude 5.0 and above — were felt as far north as Orange County, east into Arizona and south into Mexico, according to the U.S. Geological Survey.

The USGS recorded more than two dozen earthquakes in Imperial County, many of them near Brawley. Officials said people reported feeling the quake in Yuma, Ariz., Lake Havasu as well as in Baja California.

The USGS’s “Do You Feel It” system shows the quakes were felt as far away as San Diego, Temecula and San Clemente. The 5.4 quake was also felt in Moreno Valley, Indio, National City and Palm Desert.

The quakes could be felt in the press box at the Del Mar Race Track in neighboring San Diego County, where the $1-million Pacific Classic is scheduled later Sunday.

The burst of quakes took place roughly 16 miles from El Centro and 92 miles from Tijuana. In the last 10 days, there have been six earthquakes of magnitude 3.0 or greater centered nearby.

There were no immediate reports of serious damage or injuries from the temblor, though reports were still coming in.

The border region is known for frequent seismic activity, though the size of these quakes is larger than typically seen.

Here is the RAW data from today Earthquakes all over the world ( Time displayed on events are in Central European Time Zone UTC/GMT +2) :