Search for Extraterrestrial life – Where Are They? 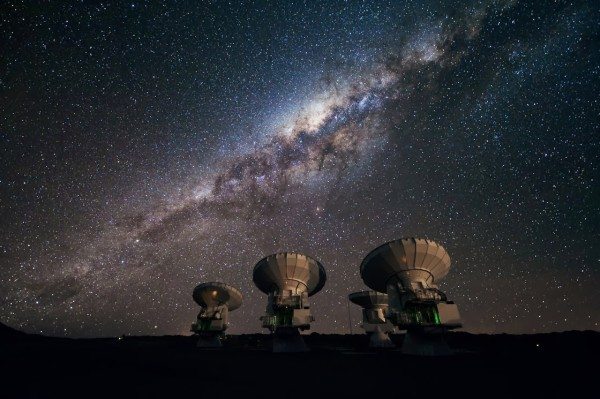 -Mario Livio is an astrophysicist who worked for 24 years with the Hubble Space Telescope (NASA), and a best-selling author of popular science books-

Alien life, if it exists, could be as simple as bacteria or more complex than humans—and there are optimal strategies for searching for both

Physicist Enrico Fermi famously asked the question “Where are they?” to express his surprise over the absence of any signs for the existence of other intelligent civilizations in the Milky Way Galaxy. Although many potential resolutions to this so-called “Fermi paradox” have been suggested over the years, there is still no consensus on which one, if any, is correct. The question of whether we are alone in the Milky Way (or in the universe at large) remains, however, one of the most intriguing questions in science in general, and in astronomy in particular.

Given the enormous uncertainties involved with the emergence, evolution, and survivability of any extrasolar life (if it exists), we shall attempt to briefly identify the most generic, remotely-detectable signatures of alien life (both simple and intelligent), and to examine the expected effectiveness of various search strategies. This topic has become particularly timely, because observations (primarily with the Kepler space telescope) have shown that the Milky Way contains no fewer than a billion Earth-size planets orbiting Sun-like (or smaller) stars in the “Goldilocks” region that allows for liquid water to exist on the planet’s surface (the so-called habitable zone). Furthermore, the search for extraterrestrial intelligent life has recently received a significant boost in the form of “Breakthrough Listen”—a $100-million decade-long project aimed at searching for non-natural transmissions in the electromagnetic bandwidth from 100 megahertz to 50 gigahertz.

Simple life appeared on Earth almost as soon as the planet cooled sufficiently to support water-based organisms. To be detectable from a distance, however, life has to evolve to the point where it dominates the planetary surface chemistry and has significantly changed the atmosphere, creating chemical “biosignatures” that can in principle be detected remotely. For instance, Earth itself would probably not have been detected as a life-bearing planet during the first two billion years of its existence. Concerning the evolution of intelligent life, the main open questions include:

—What are the geochemical constraints on the evolution of complex life?

—What are the timescales that those constraints dictate?

—Are there evolutionary “filters” or bottlenecks that make it extremely hard to make the transition to intelligence? On Earth, for example, it took about three billion years for the most basic multi-cellular life forms to appear. It took four and a half billion years (and a series of contingencies such as plate tectonics and asteroid impacts) to reach even the most rudimentary capability of interstellar communication (That is, via radio reception and transmission). These considerations demonstrate that it is important to first establish whether planetary systems that are older than the solar system are common in the Milky Way.

The current age of the solar system is about half that of the our galaxy’s disk and also half of the sun’s predicted lifetime. We therefore expect that roughly one half of the stars in our galactic disk are older than the sun. A recent study that examined planet formation history concluded that the solar system formed close to the median epoch for giant planet formation, and that about 80 percent of currently existing Earth-like planets may already had been formed (pdf) at the time of Earth’s formation. This gives us great leverage for probing extrasolar intelligent life.

Which detectable biosignature may be considered the most reliable for the existence of simple life (on a sufficiently old, rocky planet, in the habitable zone)? Even though no single biosignature would be absolutely compelling, an atmosphere that is very rich in oxygen (say 20 percent or more) would probably be the most promising target initially. Wheras non-biological processes (such as the splitting of carbon dioxide by intense ultraviolet radiation) can produce oxygen in a planetary atmosphere, only under rare circumstances would these create such high levels of enrichment. Only in combination with other potential biosignatures, however, such as methane, would the credibility of a life-based origin for the oxygen be significantly strengthened.

Consequently, an excellent first step in the quest for signatures of simple extrasolar life in the relatively near future would be to: search for oxygen, but try to back it up with other biosignatures. This can (in principle) be achieved with large, ground-based arrays of relatively low-cost flux collector telescopes (such as a next-generation European Extremely Large Telescope; with a collecting area the size of a few football fields), if these are equipped with very-high-dispersion spectrographs. The oxygen lines from the exoplanet’s spectrum would be slightly Doppler-shifted relative to oxygen in Earth’s atmosphere, making it relatively straightforward (although definitely not easy) to detect them. The more difficult detection of methane in the infrared would have to follow.

What would be the requirements from a space mission? We would want to be able to at least place a meaningful constraint on the rarity of extrasolar life, if such a mission happens to not detect any biosignatures.  Simulations show that in the case of non-detection, to be able to make a statement such as: “remotely detectable life occurs in less than about 10 percent of Earth-like planets around sun-like stars,” would require the ability to image and characterize the atmospheres of at least three-dozen or so exoEarths. Such a yield, in turn, would necessitate a space telescope aperture exceeding about 8.5 meters in diameter. The proposed Habitable-Exoplanet Imaging Mission (HabEx), under discussion for the next decadal survey, would have to be designed at the upper limit of its currently conceived aperture to meet this particular requirement. The more ambitious nine- to 12-meter Large UV/Optical/IR (LUVOIR) type space telescope such as the proposed High Definition Space Telescope would be a natural mission candidate for the 2030s.

One would ideally like to go beyond biosignatures and seek the clearest sign of an alien technological civilization.

Source and the full article can be read on: Scientific American