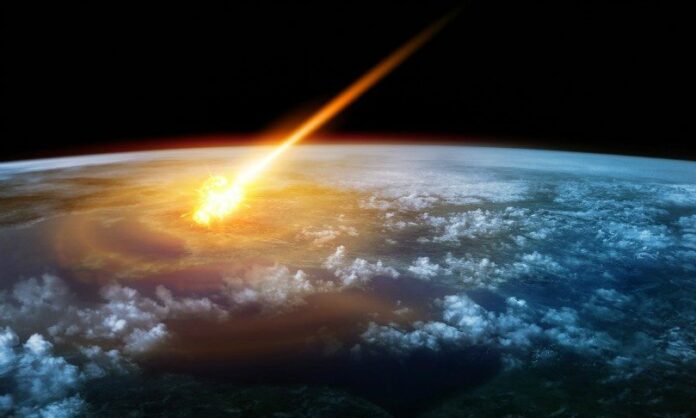 It’s well known that the dinosaurs were wiped out 66 million years ago when a meteor hit what is now southern Mexico but evidence is accumulating that the biggest extinction of all, 252.3m years ago, at the end of the Permian period, was also triggered by an impact that changed the climate.

While the idea that an impact caused the Permian extinction has been around for a while, what’s been missing is a suitable crater to confirm it.  Associate Professor Eric Tohver of the University of Western Australia’s School of Earth and Environment believes he has found the impact crater which reveals though the trigger was the same, the details are significantly different. Last year Dr Tohver redated an impact structure that straddles the border of the states of Mato Grosso and Goiás in Brazil, called the Araguainha crater, to 254.7m years, with a margin of error of plus or minus 2.5m years.  Previous estimates had suggested Araguainha was 10m years younger, but Dr Tohver has put it within geological distance of the extinction date. North America may have suffered a large cosmic impact about 12,900 years ago that led to the demise of the early “Clovis” people, researchers say.

Data from ice cores taken from Greenland show a layer of platinum during the same age as a known, abrupt climate transition, researchers at Harvard University reported. The finding supports suggestions of an impact that tipped the climate into a colder phase that may have led to the extinction of large mammals such as the mammoth, widespread wildfires, and rapid changes in atmospheric and ocean circulation, they said.

Researcher Michail Petaev and Harvard colleagues, writing in the journal Proceedings of the National Academy of Sciences, said a 100-fold increase in platinum concentration occurs in ice that is around 12,890 years old, the same period for which oxygen isotope measurements show rapid cooling of the climate.

Debris thrown into the atmosphere in an impact may have tipped the Earth into global cooling, they said, difficult for ecologies and societies to adjust to.

Such cooling has been put forward as the cause of the extinction of massive mammals like the mammoth and native cultures such as the Clovis people in North America. The Chicxulub crater in Mexico, is 180km in diameter while the Araguainha is 40 kilometres across and was thought to be too small to have caused the chain reaction which brought about such mass extinction.

“I have been working with Fred Jourdan at Curtin University and UWA post-doctoral fellow Martin Schmieder to establish better ages for various impact structures in Australia and abroad.  We were particularly interested in the Araguainha crater, since the original age determined in the 1990s was relatively close to the Permo-Triassic boundary.  The refinements in geochronological techniques that we are applying are helping to reveal the true age of these structures,” Dr Tohver said.

The results of an extensive geological survey of the Araguainha crater funded by UWA and the Australian Research Council and published in Palaeogeography, Palaeoclimatology, Palaeoecology, revealed that a sizeable amount of the rock is oil shale.  The researchers calculated that the impact would have generated thousands of earthquakes of up to magnitude 9.9, significantly more powerful than the largest recorded by modern seismologists for hundreds of kilometres around, releasing huge amounts of oil and gas from the shattered rock.

Dr Tohver believes the explosion of methane released into the atmosphere would have resulted in instant global warming, making things too hot for much of the planet’s animal life. “Martin Schmieder and I are currently working on documenting some of the more extreme environmental effects of the impact, including giant tsunamis.  In addition, ongoing work with Kliti Grice at Curtin University and her Ph.D. student Ines Melendez will be fundamental to documenting changes in the organic geochemistry of the target rocks,” Dr Tohver said.

It’s estimated more than 90 per cent of all marine species and about 70 per cent of land-based species disappeared in the Permian extinction.