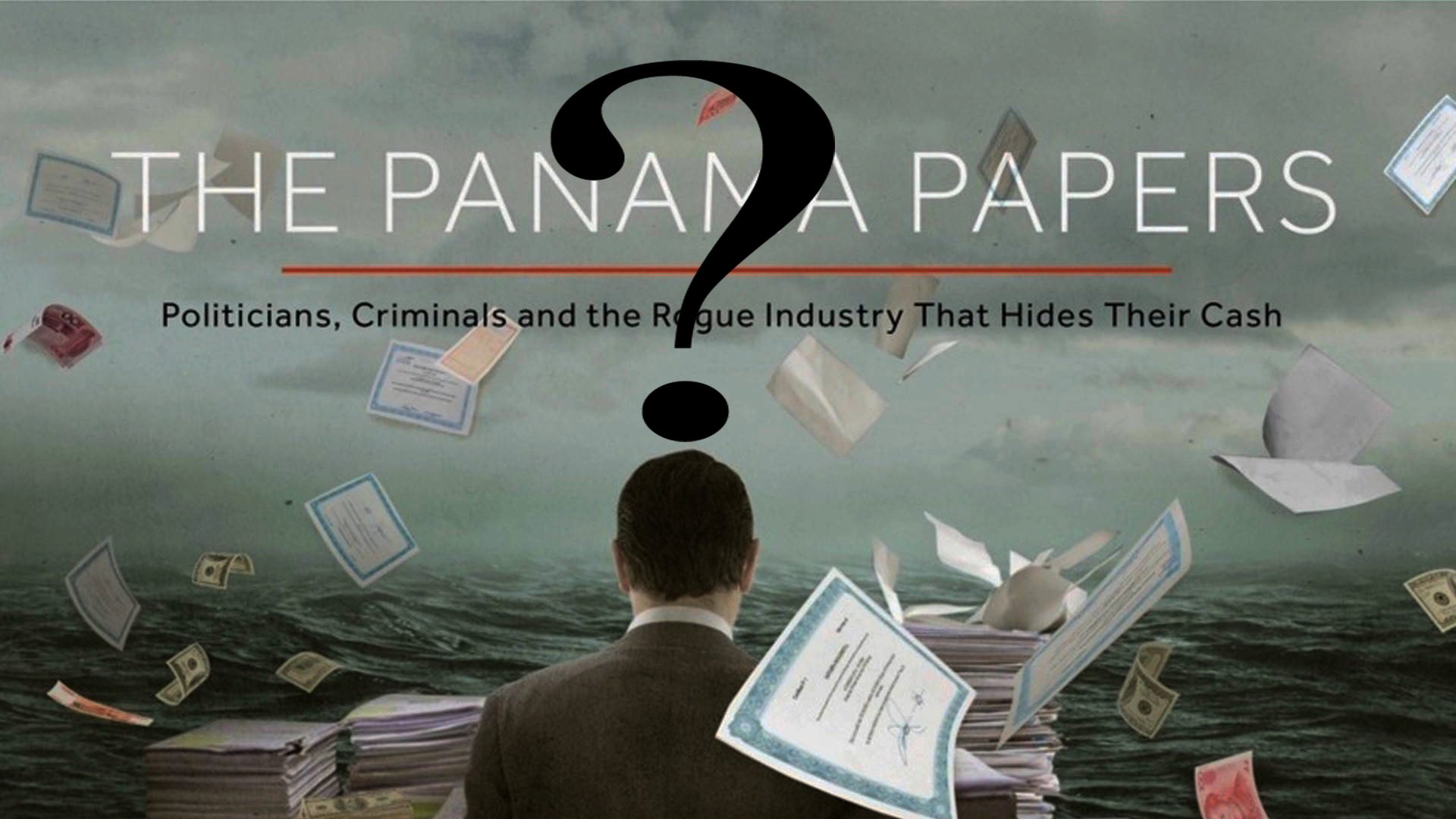 With more than 2 TB of data The Panama Papers are considered to be the biggest leak in history of  11.5 million confidential documents, constituting financial and legal records.The documents show how rich people can exploit loopholes in offshore tax regimes, launder money, dodge sanctions, avoid tax and last but not the least in total secrecy without any legal repercussions . At this moment  twelve national leaders are mentioned and among them there are 143 politicians, their families and close associates from around the world  that are known to have been using offshore tax havens.

Monssack data includes the names of : Argentinian President Mauricio Macri, The Prime Minister of Iceland Sigmundur Davíð Gunnlaugsson,  The Prime Minister of Pakistan Nawaz Sharif, Former President of Ukraine Petro Poroshenko, King of Saudi Arabia Salman bin Abdulaziz bin Abdulrahman Al Saud, King and the President of United Arab Emirates Khalifa bin Zayed bin Sultan Al Nahyan, Additionally, information has been uncovered linking family members of heads of states in  40 other countries including the father of the Prime Minister of the United Kingdom Ian Donald Cameron, son of the former President of Egypt Alaa Mubarak and the children of President of China Xi Jinping. There is no immunity for some famous Sports figures either. The papers have made  links to several persons closely involved in the massive FIFA corruption case. The world best soccer player in the world, Lionel Messi, who is already facing a trial date on charges of tax evasion in Spain, and fellow Argentine Leonardo Ulloa, forward for Leicester City sitting comfortably atop the English Premier League also without any legal consequences .

The Panama Papers are said to include 29 billionaires featured in Forbes Magazine’s list of the world’s 500 richest people.For supposedly full list of power names please visit this link

Panama Papers allegedly disclose that Spy chiefs, secret agents and CIA contractors are among those to use services from offshore companies.

ICIJ has implicated the CIA as one of the players of this secret  ( if it is legal) shadowy game of hiding money from tax collectors.

Mossack Fonseca (as stated) works with many intelligence operatives and CIA contractors to set up offshore companies to hold personal funds.

The Panama Papers names several intermediaries and gun-runners who helped the CIA supply firearms to anti-communist right-wing fighters in Afghanistan, South America and Saudi Arabia during the Cold War. Including a couple of wealthy players suspected to be involved in the Iran contra affair, in which the administration of Ronald Reagan  secretly sold weapons to Iran in an attempt to free American hostages and bankroll right-wing rebels in Nicaragua.

At first the data has been transferred to Süddeutsche Zeitung by anonymous whistle-blower that only request has been to stay anonymous . Those data consisted of e-mails, photos and other documents taken from an internal Mossack Fonseca database. Süddeutsche Zeitung, then shared the records with the International Consortium of Investigative Journalists (ICIJ). 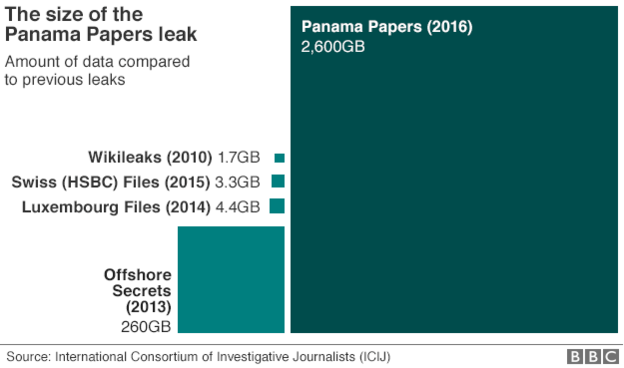 So the biggest leak in History but where are the raw data ? Why are they not being share with public for all journalist and people to be able to search trough them.

Neither the ICIJ nor any of the reporters that worked with have made the leaked data public. But the scandal resulting from their reporting has already touched celebrities, rich people, politicians, athletes, business executives and world leaders. Never mind the broad access and openness, the full leaked database has yet to leak to the public or maybe it will never leak.

In latest statement coming from Wiki Leaks they asked from ICIJ to full Panama Papers disclosure : “Why not do a Wikileaks type data dump, one which reveals if not all the 2.6 terabytes of data due to security concerns, then at least the identities of these 441 US-based clients. After all, with the rest of the world has already been extensively shamed, it’s only fair to open US books as well.”

Wiki Leaks also made some serious accusation that the Panama Paper leaker is being Sorosh funded. 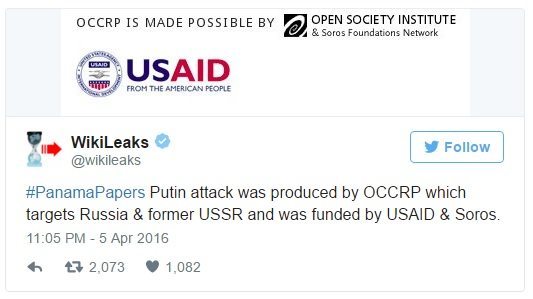 So the biggest leak in the history but only with the exclusive rights to behold and share the data by the sacred cows of international Journalism ICIJ – (funded by Sorosh Open Society, Carnegie endowment, Ford Foundation, Rockefeller)  BBC, GUARDIAN .etc. Should we bee suspicious about this ? Yes we do, because investigative journalism should be always suspicious and should never take things for granted but it should never be exclusive.

These kind of information should not be researched or shared (maybe) in a selective way with the excuse of integrity and responsibility. Who is to decide what should be deducted shared or researched ? Who is to decide who is innocent or not ?  Maybe this is not the case. Maybe everything is done properly but then why we are getting this filling that something is not right. The greatest leak in History should not be allowed to become just a greatest story of the History. It is the main reason why all the data of Panama Papers should be made public.

But maybe this opinion is wrong i hope I am wrong so lets give time for things to settle and lets believe in free journalism maybe due to vastness of data (more than 2 TB of data) they need some time to research the data .etc and then they will made the data public but:

ICIJ director Gerard Ryle said that the media organizations have no plans to release the raw and complete data of Panama Papers to the public Ryle also said that “We’re not Wiki Leaks. We’re trying to show that journalism can be done responsibly” He said that he advised the reporters from all the media that were participating in the project to “go crazy, but tell us what’s in the public interest for your country”.

I thought that the full disclosure and the truth is in BEST PUBLIC INTEREST?

TBU NEWS has tried to contact ICIJ for more information about this but did not managed to.

Also not to mention that Zeitung reporter Bastian said that he destroyed the phone and the hard drive of the laptop he’d used for his conversations with the source.

But lets see what comes out from this.