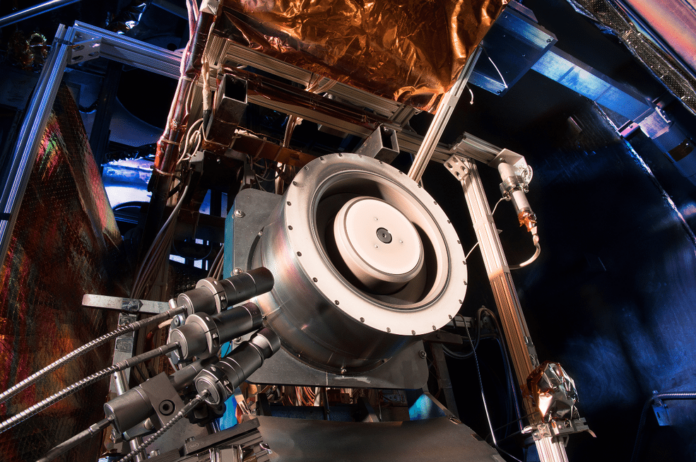 “Through this contract, NASA will be developing advanced electric propulsion elements for initial spaceflight applications, which will pave the way for an advanced solar electric propulsion demonstration mission by the end of the decade,” said Steve Jurczyk, associate administrator of NASA’s Space Technology Mission Directorate (STMD) “Development of this technology will advance our future in-space transportation capability for a variety of NASA deep space human and robotic exploration missions, as well as private commercial space missions.”

Aerojet Rocketdyne will oversee the development and delivery of an integrated electric propulsion system consisting of a thruster, power processing unit (PPU), low-pressure xenon flow controller, and electrical harness. NASA has developed and tested a prototype thruster and PPU that the company can use as a reference design.

The work being performed under this contract will be led by a team of NASA Glenn Research Center engineers, with additional technical support by Jet Propulsion Laboratory (JPL) engineers.

This work will directly complement recent advanced solar array systems work, also funded by STMD. NASA anticipates the electrical power to operate this advanced electric propulsion flight system in space will be generated by solar arrays using structures similar to those that were developed under the solar array systems contracts.

Since then, NASA has increasingly relied on solar electric propulsion for long-duration, deep-space robotic science and exploration missions to multiple destinations, the most recent being NASA’s Dawn mission. The Dawn mission, managed by JPL, surveyed the giant asteroid Vesta and the protoplanet, Ceres, between 2011 and 2015.

The advanced electric propulsion system is the next step in NASA’s Solar Electric Propulsion (SEP) project, which is developing critical technologies to extend the range and capabilities of ambitious new science and exploration missions. ARM, NASA’s mission to capture an asteroid boulder and place it in orbit around the moon in the mid-2020s, will test the largest and most advanced SEP system ever utilized for space missions.