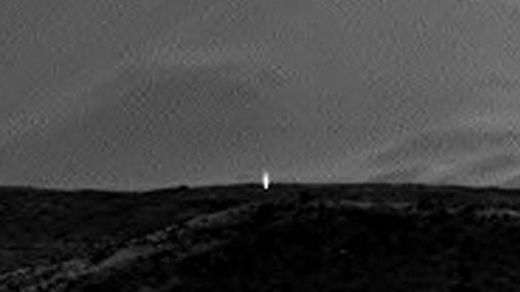 A new photograph from NASA’s Mars Curiosity rover appears to showcase a strong artificial light emanating from the planet’s surface, igniting speculation that the beacon suggests there is intelligent life on the Red Planet.

The photo in question was taken on April 3 by Curiosity’s right-hand navigation camera, and shows what looks an awful lot like a bright, shining light off in the distance. NASA itself has not commented on the nature of the light, but UFO watchers have wasted no time suggesting it’s not natural and, therefore, a sign of alien life.

“This could indicate there there is intelligent life below the ground and uses light as we do,” Scott Waring wrote on hisUFO Sightings Daily website. “This is not a glare from the sun, nor is it an artifact of the photo process. Look closely at the bottom of the light. It has a very flat surface giving us 100% indication it is from the surface.”

“Sure NASA could go and investigate it, but hey, they are not on Mars to discover life, but there to stall its discovery,” he concluded.

Others aren’t quite convinced. The editor of All About Space magazine, Ben Biggs, told The Daily Mail that people shouldn’t be leaping to such dramatic conclusions so quickly.

“While the ‘light’ is as yet unexplained, it’s quite a leap to assume that it has an intelligent source,” he said. “The public can afford to speculate wildly but NASA is an organization internationally renowned for credible science. It needs to exhaust every other likely explanation before it can begin to explore less realistic phenomena.”

Comment: NASA’s science is unethical and untrustworthy. As is the rest of science in the States.

The Corruption of Science in America

Although NASA has yet to release a statement, Doug Ellison of the agency’s Jet Propulsion Laboratory dismissed the idea that the light was proof of intelligent life. On Twitter, he told NBC News the beacon is a “cosmic ray hit,” noting that there is no light on the image taken by the left-hand navigation camera, which was also captured at the exact same moment.

Dr. Chris Bridges of the Surrey Space Center, meanwhile, concurred, saying it was a “galactic cosmic ray” hitting the camera.

NASA has denied claims that a flash of light in a photo taken by Curiosity, is proof that the rover has found alien life as rumored on many UFO websites. The photos, taken by Curiosity on the 2nd and 3rd of April, show the rough Martian landscape and a single bright glint of light that looks like it might come from some sort of artificial source. The “alien life” speculation empasized that there appears there is a square part at the base of the light, which seems inconsistent with any kind of natural explanation. The spot of light also appears to be in different positions in each photo, possibly indicating a moving light source.

But NASA imaging scientist Justin Maki, who works at NASA’s Jet Propulsion Laboratory ss head of the team looking after Curiosity’s engineering cameras, has denied the alien life rumors pointing out that the light appears only in the photo taken with the camera on the probe’s right-hand side suggesting that it’s sunlight reflecting off a particular rock, or light that has found its way through the camera’s housing due to damage of some sort.

Mars rover mission’s suggests that the light is due to cosmic rays bouncing off the camera’s detector or is simply a very “glinty” rock that has been caught by the rover. This theory is supported by the fact that both photos are taken at a low angle looking up the ridge with the sun behind the rover.

The flash of light is off Curiosity’s prescribed route, about 175 yards away, over the ridge, so the rover will not be investigating its source. A fact certain to inspire further rumors of NASA cover up among the “Alien Life” proponents.