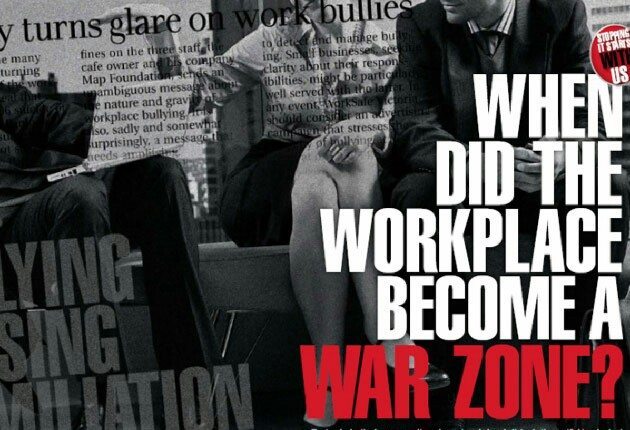 Before you read this remarkable article TBU NEWS has an advice for you: If these things happen to you please record everything using phone, camera, audio recordings and save any email or document that can prove “the misconduct”. Backup everything, every possible evidence never lose a line of the story and eventually if needed please report the misconduct to the management of the company. If “reporting” the issue to company management does not solve the problem take immediate legal actions trough the state system and report it to the media/press. Let’s give a word of advice to a management of every single corporation: You don’t need “loyal” workers who damage and sabotage other workers. Other workers that are giving their best for their company and do their job properly with knowledge and commitment.

No you don’t need these kind of worker’s. These kind of worker’s are just undermining good workers because they lack knowledge, they need to learn things mechanically and they are afraid from losing their job. Every work evaluation of every worker should be checked and double checked. The fraud and conjured evaluation must not be allowed by the corporations. Corporations should not allow bad workers to “become good” or good to “become bad”. There is no excuse for this kind of behaviour. You can not make good results by force or by falsifying those same results to appear good and when that doesn’t help then you try to hide those bad results or eventually blame others for them. Usually the good workers those that suddenly became “bad workers” are to blame. This is wrong, this is a distortion and of a criminal kind!

Workers around the world regularly play the game of mobbing as a means to retaliate against a superior, to reduce the threat of competition, or merely to oust an unwanted coworker. Mobbing is here to stay, and it’s likely unstoppable. It’s a matter of survival.

An industrial psychologist in Sweden studied the syndrome of mobbing in the workplace for decades in major countries around the globe and found this unsavoury practice exists as a part of our human behavior. Researchers there even found that a large number of their suicides were related to mobbing incidences in the workplace. When an anthropologist, a counselor, and human resources consultant joined forces and published one of the first-ever books examining this phenomena in the American workplace, many for the first time in this country were able to appreciate the impact of this dark side to humanity. Mobbing is a “ganging up” or “bullying” approach in humans that mimics the survival behaviours that we can observe in other members of the animal kingdom. Chimps for instance gang up to torment or use violence to oust an undesirable member of the clan. In humans mobbing is a tenacious yet natural force that pushes an undesirable coworker out of the organization through such behaviors as humiliation, intimidation, and isolation. A step up the chain, we humans effectively use language rather then resort to physical violence to remove a member of the group. We use discrediting, innuendos, and rumours in our bullying process that can take place over a rather long period of time.

Typically, those who formulate a mob target a victim that can be used as a scapegoat. Placing blame on a targeted coworker is a high-level form of abuse for which its emotional impact on the victim can be egregious and have long-lasting and recurring affect such as may be revealed in post traumatic stress disorder, or worse. It can lead to the victim’s escape from suffering by committing suicide. Decision Making in the Workplace

Organizations need to take this matter seriously because the results of allowing or even initiating mobbing in the workplace can have serious consequences not just for the infected organization, but for our human kind. Workers need to understand that humans are indeed a member of the animal kingdom and we will have a natural tendency to gang up in order to preserve our own survival.

For the organization, mobbing in the workplace can result in criminal liability under harassment and protective occupational safety laws. Employers are increasingly held responsible for the damaging behaviours of their supervisory and other employees. In some instances, they are even responsible for the acts of customers against employees. For victims, the result of mobbing can mean a tarnished reputation, loss of employment, and a host of other negative outcomes. Both sides need to take responsibility in understanding the nature of this phenomenon that may stem from the perceived need for self-preservation.

In understanding our human nature and the consequences we can have on others, we may be able to offset the unwanted behavior at the personal and organizational level. If the organization is able to identify incidences that are catalysts for mobbing, and potential victims are able to recognise when mobbing is occurring, there may be a means to save both the organization and the victim from the possibility of a seriously negative and inhumane outcome.

Signs of Mobbing in the Workplace

We have all likely heard the term “good old boys club.” This is a group, generally of males, that empowers and readies itself for action against any individual(s) that threatens the success of its members. This is a group poised and capable of mobbing. Other groups inside the organization can formulate alliances such as among onsite counsel and human resource personnel. Teams that formulate regularly inside the walls of the work environment are capable of formulating a mob-like group. Individuals who converge regularly “around the water cooler” or who go out for lunch meetings have the ability to formulate a tightly configured group within the confines of the organization.

When a worker harasses another, chances are this is someone who is representing a group of individuals. When workers are regularly leaving the company, calling in sick, and/or revealing a decrease in productivity, these are signs that mobbing may be an issue.

A blog posted in March, 2006 from a woman desperate for help with her plight in her workplace indicates she is likely the victim of mobbing. She states that since joining her current company she has been moved several times. She never knew about the moves until there was a public announcement. Her manager has made innuendoes that she is unwilling to learn and that she has the wrong attitude. She states that she has accepted all assignments willingly, and that she is even studying online through the company’s education program. She was required to train a new department manager who was reportedly difficult to work with. The outcome was not a positive one as might have been expected. Again she was moved. Any ounce of complaining was met with snide remarks to her. She finally put out her blog with the title, “Help!”

Surviving Mobbing in the Workplace

It is likely the woman who posted the blog seeking help has been targeted by a group of bullies, and no matter what she tries to do to remedy the negativity around her, things may only get worse. It may be impossible to salvage her workplace relationships. The best remedy may be to quietly seek another opportunity at an organization that represents a better fit. But the problem may repeat itself elsewhere unless this woman plays the game of survival as well. She reached out to the public with her blog, but she failed to formulate her own alliances internally. Working independently, may not prove to be the safest means to long-lasting success and advancement within the organization. There is after all, safety in numbers.

This is not to say that workplace mobbing is justified or that opposing alliances are the answer. We are supposed to be more civilized than that. We should be able to control our instinctive behaviours to run over anyone who is perceived to be outside our circle of influence. It is questionable whether we are capable of accomplishing such self-restriction when an estimated 20 million Americans experience workplace abuse on a daily basis, making mobbing and its affiliations a crisis of epidemic proportion.

However, seeking awareness has been dually exponential. Much attention is being given to this global deterioration of our workforce. Awareness helps the organization and its workforce to understand the harmful outcome of mobbing in the workplace, leading to solutions that might protect all parties at the onset of the formulation of opposing alliances.

Although mobbing has become a household word in some countries, it is organizational leadership that plays the most important role in its prevention. But in reality, can a part of our human nature be eradicated in the workplace? Can we survive such instinctive behaviours as mobbing when it happens? For one thing, the victim should be aware that there is little that they could have done differently. The organization should be aware that there is a grave need to enforce policies at all levels, including at the senior management level.

Whereas the true cost of mobbing in the workplace can be observed in terms of ruined lives, it is not clear the cost to American businesses. The need for intervention is great and no doubt costly. Some reportedly conservative estimates accounting for the intervention employment of personnel officers, consultants, and occupational health staff are quite high. Perhaps a worthy industrial psychologist and/or human performance improvement expert should be added to this list. Aside from the obvious costs of employee turnover and other outcomes, it is difficult to quantify the impact that mobbing in the workplace is having on the affected organizations. Consideration must go to public relations, investor confidence, reputation, and of course loss of capital on untold levels.

We can develop policies and furnish resources, but all of this may be futile if we are not addressing the cause, our human nature. Mobbing may appear on the surface to be demeaning harassment, but beneath the surface looms our most basic instinct to out-survive another and to likewise rid ourselves of those who appear to be different.