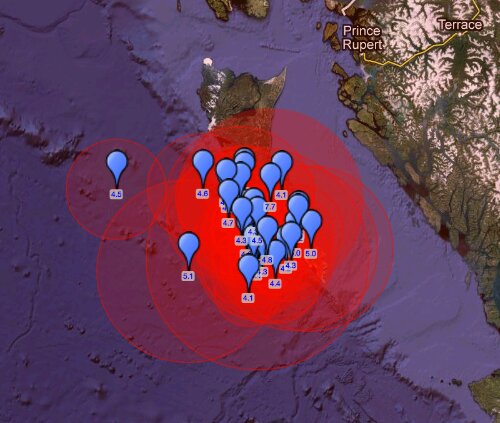 A magnitude 7.7 earthquake hit Canada’s Pacific coast province of British Columbia on Saturday night, the U.S. Geological Survey reported. The quake was centered 123 miles (198 km) south-southwest of Prince Rupert at a depth of 10.9 miles (17.5 km), the USGS said. The epicenter of the quake was 727 km (452 miles) NW (306°) from Vancouver, British Columbia, Canada.

Swarm of aftershock quakes are on the way :

Tsunami is heading towards Hawaii Scientist: A series of waves could last for hours, with some waves reaching 7 feet The tsunami was prompted by a magnitude 7.7 earthquake in western Canada.

After barreling across the Pacific Ocean for hours, a tsunami spawned by an earthquake in Canada struck the Hawaiian islands. Waves between 3 and 7 feet were expected to lash the islands beginning about 10:28 p.m. Saturday (4:28 a.m. Sunday ET), the Pacific Tsunami Warning Center said. The first waves to hit Honolulu didn’t seem much stronger than usual.

But scientists said don’t be fooled by the initial waves, which often aren’t the biggest. “It’s not just one wave, it’s a succession of waves,” Gerard Fryer, senior geophysicist at the center, told reporters. “The following waves, I am sure, will But he noted that the tsunami will not be as significant as the devastating quake and tsunami that killed thousands in Japan in March 2011. Local television showed images of bumper-to-bumper traffic on roads leading from the coast to inner ground. About 80,000 people live in evacuations zones in the island of Oahu, the island where Honolulu is located.

Basically this tsunami is pointed right at us Gerard Fryer John Cummings, spokesman for Honolulu Emergency Management, said officials have opened 26 centers for evacuees. “All islands and all shorelines will be affected when it comes in,” Cummings said. Honolulu Mayor Peter Carlisle urged residents who are already on higher ground to not clog traffic. Officials expressed concerns about emergency vehicles getting by in heavy traffic. But the tsunami warning came at an unfortunate time — when thousands of revelers packed streets in Honolulu for the annual Hallowbaloo festival. Even Hawaiians accustomed to tsunami warnings spared no effort in bracing for the worst. Honolulu resident Victoria Shioi filled her bathtub with water, set her refrigerator to the coldest setting and gathered candles in case of water or power outages. “Also backed up my computer and put the external (hard drive) in the waterproof safe,” Shioi said. The tsunami was spawned by an earthquake in western British Columbia, prompting a local tsunami warning and sending some residents toward higher ground. “A (magnitude) 7.7 is a big, hefty earthquake — not something you can ignore,” Fryer said. “It definitely would have done some damage if it had been under a city.” Instead, the quake struck about 139 kilometers (86 miles) south of Masset on British Columbia’s Queen Charlotte Islands. No major damage was reported.