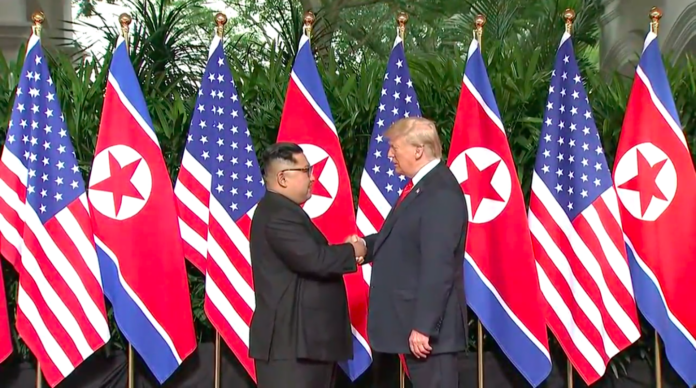 The much-anticipated summit marks the first time a North Korean leader has met a US president and it is expected to focus on the US efforts to get North Korea to fully abandon its nuclear programme.

“Peace cannot be kept by force; it can only be achieved by understanding.”

Trump said that “relationship with North Korea and the Korean peninsula is going to be in a very much different situation” while Kim stated, that the world was about to see “a major change.” Kim Jong Un

“Great personality and very smart. He is a worthy negotiator, very worthy, very smart person. We had a terrific day, and we learned a lot about each other,” said Trump.

“I learned he is a very talented man, and I also learned that he loves his country very much,” he added.

*US President Donald J. Trump​ met with North Korean leader Kim Jong-Un at a historic summit in Singapore on Tuesday.

The much-anticipated talks are the first ever meeting between leaders from North Korea and the United States.

Washington hopes the summit will lead to the denuclearisation of the Korean Peninsula.

Pyongyang is willing to begin a process of denuclearisation, but it is not known how this will be achieved or what it will ask for in return.

The much-anticipated summit marks the first time a North Korean leader has met a US president and it is expected to focus on the US efforts to get North Korea to fully abandon its nuclear programme.

* Secretary-General of the United Nations Antonio Gutteres commended the leaders of North Korea and the USA, Kim Jong-un and Donald Trump, for their upcoming meeting in Singapore. Gutteres spoke from the United Nations headquarters in New York City.

“I commend the leaders of the Democratic People’s Republic of Korea and the United States for pursuing a diplomatic solution,” he said.

“The two leaders are seeking to break out of the dangerous cycle that created so much concern last year. Peace and verifiable denuclearisation must remain the clear and shared goal”, he added.

“Relevant parts of the United Nations system stand ready to support this process in any way, including verification if requested by the key parties. They are the protagonists,” Gutteres said.

In his closing remarks, the UN Secretary-General also said, “I urge attention to the humanitarian situation in the DPRK, where we are seeking 111 million USD to meet the immediate needs of six million of the most vulnerable people.”

Trump wants Kim to agree to what the U.S. calls a “complete, verifiable, irreversible denuclearization.” That means giving up its nuclear arsenal — and its ability to produce or procure more nuclear weapons — permanently. It also means allowing international inspectors in to ensure North Korea is not cheating.

Earlier, US Secretary of State Mike Pompeo said that the US will offer ‘unique’ security assurances to North Korea in return for the country’s complete denuclearisation, one day ahead of the summit between US President Donald J. Trump and North Korean Supreme Leader Kim Jongun.

“We are prepared to take actions that will provide them sufficient certainty that they can be comfortable that denuclearisation isn’t something that ends badly for them,” Pompeo stated in a briefing. “Indeed just the opposite, that it leads to a brighter, better future for the North Korean people.”

Pompeo also said that Trump ‘is fully prepared for the meeting tomorrow. He has had the chance to hear lots of different voices, all of the attended opportunities and risks.’

Departing G7 summit Trump stated:”I feel that Kim Jong-un wants to do something great for his people, and he has that opportunity, and he won’t have that opporunity again … He can take that nation with those great people and truly make it great, so it’s a one time, its a one time shot, and I think it’s going to work out very well,” Trump said.

The 2018 North Korea–United States summit, or Singapore Summit will be the first summit between a sitting United States President and the leader of North Korea. It is scheduled to take place on June 12, 2018 at the Capella Hotel on Sentosa Island in Singapore.