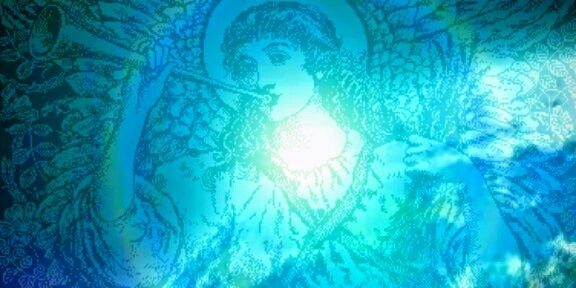 First just a word about Gabriel’s Horn from scientifically and religious point of view as a brief introduction to this article that is going to talk about some dark predictions that came out last month in one mainstream media publishing portal Huffington Post.

Gabriel’s horn (also called Torricelli’s trumpet) is a geometric figure which has infinite surface area but finite volume. The name refers to the tradition identifying the Archangel Gabriel as the angel who blows the horn to announce Judgment Day, associating the divine, or infinite, with the finite. The properties of this figure were first studied by Italian physicist and mathematician Evangelista Torricelli in the 17th century.

Gabriel’s horn is formed by taking the graph of

(thus avoiding the asymptote at x = 0) and rotating it in three dimensions about the x-axis. The discovery was made using Cavalieri’s principle before the invention of calculus, but today calculus can be used to calculate the volume and surface area of the horn between x = 1 and x = a, where a > 1. Using integration , it is possible to find the volume

and the surface area

can be as large as required, but it can be seen from the equation that the volume of the part of the horn between

; however, it will get closer and closer to

times the natural logarithm of

. There is no upper bound for the natural logarithm of

approaches infinity. That means, in this case, that the horn has an infinite surface area. That is to say;

As mentioned at the beginning TBU NEWS is going to republish some information about dark predictions for 2016 that came last month in one article published by Huffington Post. TBU NEWS is not going to give comments on this please let you be the judge of it.
Article written by :
Dr. Carmen Harra is a best-selling author, clinical psychologist, and relationship expert. Her newest book, The Karma Queens’ Guide to Relationships, is available everywhere books are sold.
We’re starting to understand that things are coming to an end, yet in many more ways, we feel that we’re on the brink of a new beginning. Without a doubt, we’re in the middle of a crisis like never before. Our saving grace lies in acknowledging the totality of what is happening. We must admit that these developments are affecting us all in the same negative manner.

But the dark era is coming to an end. Many people believe that this is the beginning of a golden period anticipated for thousands of years. The human race has finally matured, exactly like teenagers going through the turbulent years of confusion and unrest while trying to grasp the truth of who they are. We’ve reached our peak of growth, and now we’re moving up the scale of evolution that’s equipped with a superior level of experience and incredible complexity. The real world, as it exists now, will soon become just a distant memory of a time of confusion and pain. We stand on the edge of an incredible transformation that will lead us into the light of our full potential.

Be prepared to let go of everything you think you’ve known in order to live a new life. Be ready for the most extraordinary adventure to rediscover truth, beyond what we can imagine. Leave behind your misconceptions, open your heart and mind, and reprogram your beliefs in order to create a new future. The following 16 predictions will start to take effect in 2016 and onward:

1: Earthquakes. Earthquakes will increase in strength and frequency once more this year. This is the Earth’s way of releasing pent-up energy because of the strain it’s endured. The earthquakes will happen mainly in Europe, Japan, and Indonesia. A series of very strong earthquakes will strike between Japan and the Himalayas. The Eastern portion of Europe will also tremble under several earthquakes this year, and there may be one in Morocco.

2: War and peace. Russia will continue to attack Ukraine but will sign a collaboration agreement with China. North and South Korea will join forces this year.

4: We will become more robotic. Robots will take the place of more human workers. We already see this happening, but it will occur more frequently in the coming years. Technology will explode on every level: the way televisions, phones, and cars work will change. The focus will be on more energy-efficient technological gadgets that interact intelligently with their owners.

5: People will protest. I see hundreds of thousands of people in the street at the same time in cities throughout the world. There will be a global event which will ask people to step out of their homes and march through the streets. The number of people simultaneously gathered outside all over the globe will be unprecedented. There will also be a critical meeting of leaders worldwide to address pending issues like climate change, the economy, and terrorism–elements that affect us all.

6: A new system of money. There will be changes in the monetary system, particularly a new system of money including new bills and coins. In the future, there will be only one global monetary system, as Europe has done with the Euro. We’ll find new ways to be reimbursed for our labor, pay for goods, and so on. We will come to the realization that paper money needs to be replaced with a more efficient alternative, so we’ll develop electronic currency. In addition, the countless banks that exist today will converge into one single bank that spans across the globe.

7: More female leaders. A country in South America will welcome a new female president. Other parts of our world will also experience a surge in female leadership. We will begin to see increasing numbers of women as national leaders as the feminine force brings unity and harmony between the energies of the two sexes.

8: Intervention in police violence. Recently there has been increased attention to police violence. The system of law enforcement has proven to fail time and time again. This year will bring many more protests against police violence and under this pressure, police departments will enforce new techniques to keep officers under check, such as body cameras.

9: Trouble in the White House. I don’t see Trump in the final phases of the elections–something might happen to him. The final race will be between Jeb Bush and Hillary Clinton. Who wins from there is our free will. But whoever does become our next president will have a very tough time. A woman was destined to become head of the White House for a long time. In the end, however, this is our decision. Elections are manmade and decided by people, so free will overrides fate here.

10: We will defeat Isis. Isis will continue their tactics of intimidation here and there, but their intensity will diminish towards the end of 2016. The terrorist attacks will continue in Europe around Paris, Rome, London, and Berlin, the large old-world cities. This is the year in which leaders of our world will collectively declare war on Isis. Countries will join forces to find a solution to terrorism. One of the leaders of Isis will be caught and this will reveal the headquarters of the terrorism group, leading to its destruction.

11: A slow economy. The economy, unfortunately, isn’t moving in the right direction just yet. This is a year of economic stagnancy and we will witness more European countries collapse economically. In the US, there will be big fluctuations in the economy. Silver and gold will continue to go up. Gas prices will go up again.
Our economic issues are much deeper than we can imagine. Acting as separate nations, we cannot hope to fix the problem. Almost every place in the world is experiencing difficulties. We’ve been approaching the matter ethnocentrically, but our approach needs to shift to a global one. Only by developing one international financial system will the economy become whole, steady, and healed. In the farther future, money will no longer be the root of all evil.

12: We will heal through nature. We may not haven’t discovered the elixir of life yet, but more cures have been invented than we can imagine. We do have a cure for cancer and many other illnesses, but we’re not allowed access to them yet. It might not happen this year, but we will benefit from effective vaccines against cancer. There will be advancements in the medical field at the level of cellular behavior. We will be able to heal illnesses by dealing with them at their source: cells that malfunction.
People are moving towards healing themselves rather than having a pill or machine heal them. We’re educating ourselves on natural cures and applying them to live longer, healthier lives. More people will steer away from traditional medical methods–which are often invasive and harsh on the body–and instead will cure their own bodies, minds, and spirits.

Source : huffpost.com
Is Dr Carmen analysis strictly ment for 2016 or further ? Can it be looked  at just as it is written or?
Best Regards