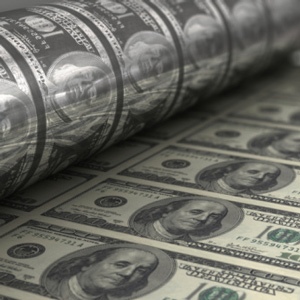 The latest round of quantitative easing announced Thursday by the Federal Reserve triggered a rating downgrade by Egan-Jones. Already the rating agency had warned on Wednesday when it affirmed the U.S. rating at AA that “QE3 will likely trigger a negative action.” Given that the outlook is already negative (AA-), a downgrade to AA- was the logical next step for the rating agency. “We are not receiving QE3 positively,” Vice President and co-manager of the ratings’ desk Bill Hassiepen told MNI Thursday, while the fiscal situation is a “nightmare.”

While the Fed is seeking to support economic growth through its quantitative easing, Hassiepen argued that the central bank’s “massive monetization” is instead causing “sluggish to stagnant economic growth.” In fact, he expects growth to become stagnant within six months as a result of the Fed’s policy. The reason the country does not have a weaker rating, he said, is that it remains “the only viable reserve currency in the world.”

The Federal Reserve Open market Committee said Thursday it “agreed today to increase policy accommodation by purchasing additional agency mortgage-backed securities at a pace of $40 billion per month,” but did not announce an end date. At the same time, it will continue its Operation Twist through the end of the year as it is currently scheduled, while “maintaining its existing policy of reinvesting principal payments from its holdings of agency debt and agency mortgage-backed securities in agency mortgage-backed securities.” The Federal Reserve’s “money printing,” Hassiepen said, has not “really contributed to the improvement in the general economy” so far. Instead, all it has done is increase inflation and the cost structure in the general economy, as will the new round of QE just announced Thursday. “We actually think this is going to cause unemployment, not employment,” he said.

The Fed’s policy will reduce household’s disposable income and raising costs will also “lead companies to lay off people,” he said. “Let’s say six months from now, you might see job actions” in some of the more commodity-sensitive industries that are particularly vulnerable to an increase in commodity prices and a weak dollar, he predicted. “This is going to cause the economy to completely stagnate,” he said, expecting the effect to start within three or four months. He first expects a “rapid uptick in gasoline and food prices,” which will affect households’ disposable income.

This in turn will take several months to work its way through into the general economy. “People are going to feel nostalgic for the 1.7% for the last quarter,” he said, referring to the second quarter GDP growth. “Unfortunately we have a Federal Reserve that simply does not recognize the inflationary impact of food and energy prices any longer,” he said. He expects another “massive uptick in the speculation in the strategic commodities and energy markets.” Speculators, he said, hedge themselves against a depreciating dollar by “boosting up the cost of the commodity.” “They have been doing it since 2004 and it’s worked,” he said.

While the Fed’s policy is increasing the costs structure in the economy, he said wages are stagnant. “You don’t have the buying power in the economy,” he argued, and buying more securities won’t resolve that issue. Hassiepen also stressed that “the United States’ financial flexibility is almost gone given $16 trillion in debt,” which is 104% of GDP, and there is no real plan to put “the fiscal house under control.” In fact, even sequestration would not solve the problem of U.S. deficits, he said.

Source and Read more at:
http://www.forexlive.com/blog/2012/09/13/egan-jones-analyst-hints-at-us-rating-downgrade-post-qe3/