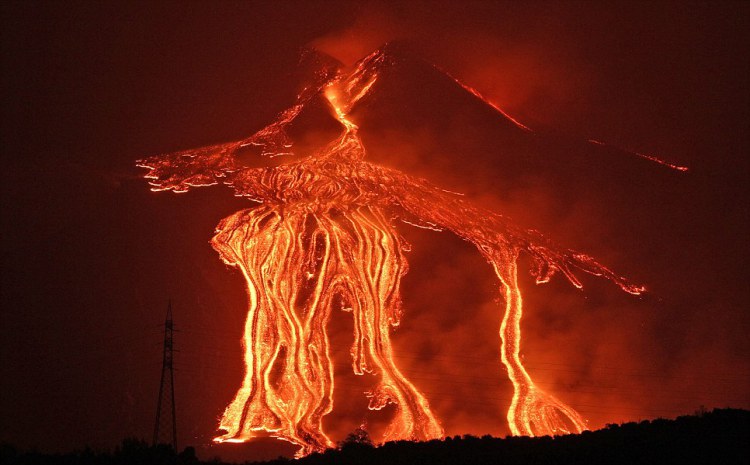 Etna, erupted for the seventh – and without doubt the most spectacular – time this year today, spewing forth molten lava hundreds of metres into the air.

Residents living close by were covered in hot ash but Europe’s tallest and most active volcano didn’t seem to pose any threat to human safety.

Local inhabitants of the Sicilian town of Catania were grateful that Etna at least didn’t close the local airport as it did last month, preventing a visiting Serie A football team from leaving the island.

The highest active volcano in Europe has blown its top three times in the past month alone, depositing a surface of black ash on its snowy higher slopes.

Standing nearly 11,000ft high, Etna regularly spews lava on to the plains below. However a quarter of Sicily’s population take the risk of living on its slopes, their crops and vines thriving in the rich volcanic soil.

Tunnels and ditches have been dug to  protect their villages from the lava flow.

The volcano has erupted three times in the last month alone close to the Zafferana Etnea village.

The crater on the south-east of the volcano, which formed in 1971, has been particularly active in the last few years.