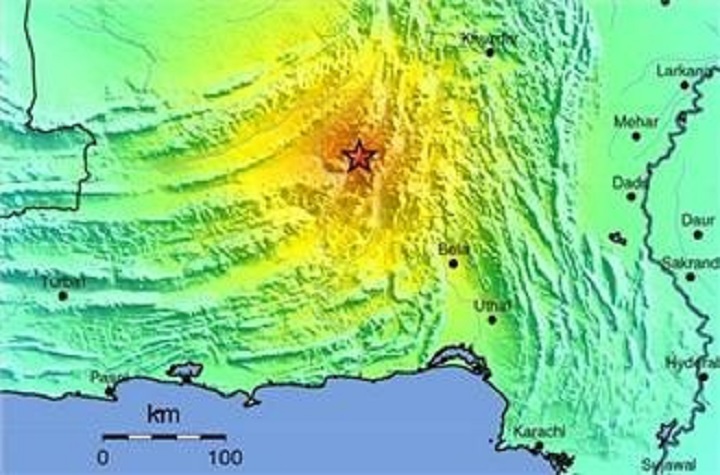 More than 200 people have been killed in a powerful earthquake in Pakistan’s remote south-west province of Balochistan.

The quake was strong enough to cause a mass 20 to 30 feet high to emerge from the ocean like a small mountain island off the coast of Gwadar, local police official Mozzam Jah said. A large number of people gathered to view the newly formed island, he said.

Large quakes can cause significant deformation to the earth’s crust, particularly visible along coastlines.

The island is about 100 feet in diameter and about one mile off the coast, GEO TV reported.

Zahid Rafi, principal seismologist for the National Seismic Monitoring Center, confirmed the island had formed. He said it was “not surprising,” considering the magnitude of the earthquake.

But John Bellini, a geophysicist with the U.S. Geological Survey, said that generally it would be unlikely for such a large island to emerge from a quake like Tuesday’s.

Many things, such as the tide, could come into play regarding the rise of the island, he said.

More than 1,000 troops will be sent to the area to provide aid, including rescue teams and medical teams, Maj. Gen. Asim Bajwa said.

The tremors lasted two minutes. People flocked out onto the streets of Quetta, the provincial capital.

Aftershocks could be felt in Karachi, hundreds of miles to the southeast.
Source:
CNN

UPDATE:
At least 45 people have been killed and more than 100 injured after a powerful 7.8-magnitude earthquake hit southwestern Pakistan, according to local officials.The provincial government has declared an emergency in Awaran district of Balochistan, the area worst hit by the quake, which struck at 4:29pm local time (11:29 GMT) at a depth of 15km.The Earthquake Reconstruction and Rehabilitation Authority (ERRA), the department tasked with responding to such incidents in Pakistan, put the death toll at 45, with more than 100 injured.Brigadier Syed Wajid Raza, ERRA’s chief of staff, told Al Jazeera that many people were still trapped under the rubble of collapsed buildings.The Pakistani military, meanwhile, has said that it has commenced rescue operations in the area.
Source: Aljazeera

A massive, shallow and very dangerous earthquake M 7.7 struck Pakistan on September 24, 2013 at 11:29 UTC (16:29 local time). The duration of the quake was close to 2 minutes.
After preliminary analysis, both USGS and EMSC are reporting magnitude 7.7 earthquake at shallow depth of 20 km (12.4 miles).
A number of aftershocks have occurred which is making life difficult for inhabitants. An M5.9 and M4.7 earthquake have been the largest so far, however it can be expected that aftershocks will plague the region in the coming hours and days.
Epicenter was located 69 km (43 miles) NNE of Awaran and 118 km (73 miles) NW of Bela, Pakistan. Former capital city of Pakistan, Karachi, with population of 11 624 219 is located 284 km SE of epicenter area.

There are 337 980 people living within 100 km radius.
Overall, the population in this region resides in structures that are highly vulnerable to earthquake shaking, though some resistant structures exist. The predominant vulnerable building types are unreinforced brick masonry and rubble/field stone masonry construction.
The quake was also felt in UAE and Oman. Panic was spreaded in Dehli and other Indian cities. People ran to the streets.
First eports from Pakistan indicate that a lot of houses in western Pakistan were damaged.
Preliminary data from EMSC:

Source and follow more at: The Watchers, USGS, EMSC