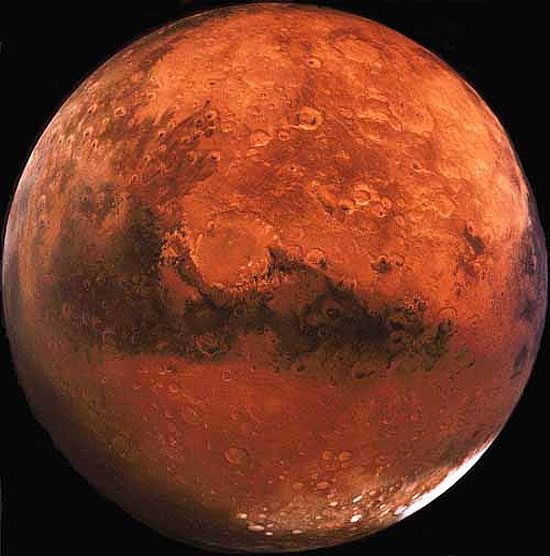 Really beat up, according to a University of Colorado Boulder research team that in 2015 finished counting, outlining and cataloging a staggering 635,000 impact craters on Mars that are roughly a kilometer or more in diameter.

As the largest single database ever compiled of impacts on a planet or moon in our solar system, the new information will be of help in dating the ages of particular regions of Mars, said CU-Boulder postdoctoral researcher Stuart Robbins, who led the effort. The new crater atlas also should help researchers better understand the history of water volcanism on Mars through time, as well as the planet’s potential for past habitability by primitive life, he said.

“This database is a giant tool that will be helpful in scores of future Mars studies ranging from age-dating and erosion to planetary habitability and to other applications we have not even thought of yet,” said Robbins, who is affiliated with CU-Boulder’s Laboratory for Atmospheric and Space Physics. “In a sense it’s like building a new and better hammer, which quickly becomes used by everyone.”

“This database is a giant tool that will be helpful in scores of future Mars studies ranging from age-dating and erosion to planetary habitability and to other applications we have not even thought of yet,” said Robbins, who is affiliated with CU-Boulder’s Laboratory for Atmospheric and Space Physics. “In a sense it’s like building a new and better hammer, which quickly becomes used by everyone.”

A paper on the subject by Robbins and CU-Boulder faculty member Brian Hynek appeared last week in the Journal of Geophysical Research – Planets, a publication of the American Geophysical Union. A companion study by the two CU researchers was published in a recent issue of the same journal. The study was funded by NASA’s Mars Data Analysis Program.

The assembly of the new Mars crater database was tedious, said Robbins. “We have all this new information coming from Mars orbiters and landers that have helped generate far better maps illustrating the planet’s topography and surface details. I basically analyzed maps and drew crater rim circles for four years.”

Hynek, a LASP research associate and assistant professor in the geological sciences department, said knowing more about the history and extent of Martian cratering has implications for better understanding the potential for past life on Mars.

“Many of the large impact craters generated hydrothermal systems that could have created unique, locally habitable environments that lasted for thousands or millions of years, assuming there was water in the planet’s crust at the time,” said Hynek. “But large impacts also have the ability to wipe out life forms, as evident from Earth’s dinosaur-killing Chicxulub impact 65 million years ago.”

Robbins said most of the smaller diameter craters on Mars are younger than the largest craters and form the bulk of the planet’s crater population. “The basic idea of age dating is that if a portion of the planet’s surface has more craters, it has been around longer,” said Robbins. Much of the planet has been “resurfaced” by volcanic and erosional activity, essentially erasing older geological features, including craters.

The new database also is expected to help planetary scientists better understand erosion on the planet, said Robbins, who earned his doctoral degree from CU-Boulder’s astrophysical and planetary sciences department. “Our crater database contains both rim heights and crater depths, which can help us differentiate between craters that have been filled in versus those that have eroded by different processes over time, giving us a better idea about long-term changes on the planet’s surface.”

Having a better handle on the size and distribution of Martian impact craters also has implications for future, manned missions to the planet, said Hynek. NASA wants to know where the craters are and their particular features both from a safety and research standpoint. “Craters act as a ‘poor man’s drill’ that provide new information about the subsurface of Mars,” he said.

Since the most complete databases of lunar craters include only those roughly 10 to 15 kilometers in diameter or larger, and databases on Mercury’s craters contain only those over roughly 20 kilometers in diameter, it is difficult to compare them with the Martian crater database, said Robbins. While there are only about 150 to 200 known impact craters left on Earth, both the moon and Mercury are still peppered with craters due to their lack of atmosphere and plate tectonic activity, he said.

Cataloging the cratering of Mars and the moon is helping scientists understand a time a few hundred million years after the inner solar system formed, including an event about 3.9 billion years ago known as the “Late Heavy Bombardment” in which asteroids as large as Kansas rained down on Earth. “Although Earth has lost most of its geologic record due to tectonic plate movements and erosion, understanding the impact crater history on the moon and Mars can help us reconstruct our early days,” said Hynek.

Did Mars lost its atmosphere due to a large Cosmic impact ?

There are some scientific claims that Mars lost its atmosphere due to a catastrophic event that happened in early Mars history.

Mars looks odd. Early astronomers noticed it, and today’s observatories see it every time they look at the red globe. Mars has two faces. One face (the northern hemisphere) is composed of barren plains and smooth sand dunes; the other face (the southern hemisphere) is a chaotic, jagged terrain of mountains and valleys. It would appear the crustal dichotomy formed after a massive impact early in the development of Mars, leaving the planet geologically scarred for eternity. But say if this impact went beyond pure aesthetics? What if this planet-wide impact zone represents something a lot deeper?

To understand what might have happened to Mars, we have to first look at the Earth. Our planet has a powerful magnetic field that is generated near the core. Molten iron convects, dragging free electrons with it, setting up a huge dynamo outputting the strong dipolar magnetic field. As the magnetic field threads through the planet, it projects from the surface and reaches thousands of miles into space, forming a vast bubble. This bubble is known as the magnetosphere, protecting us from the damaging solar wind and prevents our atmosphere from eroding into space. Life thrives on this blue planet because Earth has a powerful magnetic solar wind defence.

MARS ATMOSPHERE HAD BEEN DESTROYED BY CATASTROPHIC EVENT

Although Mars is smaller than Earth, scientists have often been at a loss to explain why there is no Martian magnetosphere. But according to the growing armada of orbiting satellites, measurements suggest that Mars did have a global magnetic field in the past. It has been the general consensus for some time that Mars’ magnetic field disappeared when the smaller planet’s interior cooled quickly and lost its ability to keep its inner iron in a convective state. With no convection comes a loss of the dynamo effect and therefore the magnetic field (and any magnetosphere) is lost. This is often cited as the reason why Mars does not have a thick atmosphere; any atmospheric gases have been eroded into space by the solar wind.

However, there may be a better explanation as to why Mars lost its magnetism. “The evidence suggests that a giant impact early in the planet’s history could have disrupted the molten core, changing the circulation and affecting the magnetic field,” said Sabine Stanley, assistant professor of physics at the University of Toronto, one of the scientists involved in this research. “We know Mars had a magnetic field which disappeared about 4 billion years ago and that this happened around the same time that the crustal dichotomy appeared, which is a possible link to an asteroid impact.”

During Mars’ evolution before 4 billion years ago, things may have looked a lot more promising. With a strong magnetic field, Mars had a thick atmosphere, protected from the ravages of the solar wind within its own magnetosphere. But, in an instant, a huge asteroid impact could have changed the course of Martian history forever.

“Mars once had a much thicker atmosphere along with standing water and a magnetic field, so it would have been a very different place to the dry barren planet we see today.” – Monica Grady, professor of planetary and space sciences at the Open University.

Losing its magnetic field after the deep asteroid impact catastrophically damaged the internal workings of the planet, Mars quickly shed its atmosphere, thereby blocking its ability to sustain life in the 4 billion years since.

NASA MAVEN (Mars Atmosphere and Volatile Evolution) mission has identified the process that appears to have played a key role in the transition of the Martian climate from an early, warm and wet environment that might have supported surface life to the cold, arid planet Mars is today. – Please click on this link for more on this subject.

NASA – ONCE UPON A TIME MARS WAS AS EARTH? On TBU NEWS - international you will be able to find news, articles, videos, photos related to different topics: news and politics, science and technology, economy and daily life, humanity and society, earth and natural cycles, unknown and beyond ...
@tbu_news
Follow