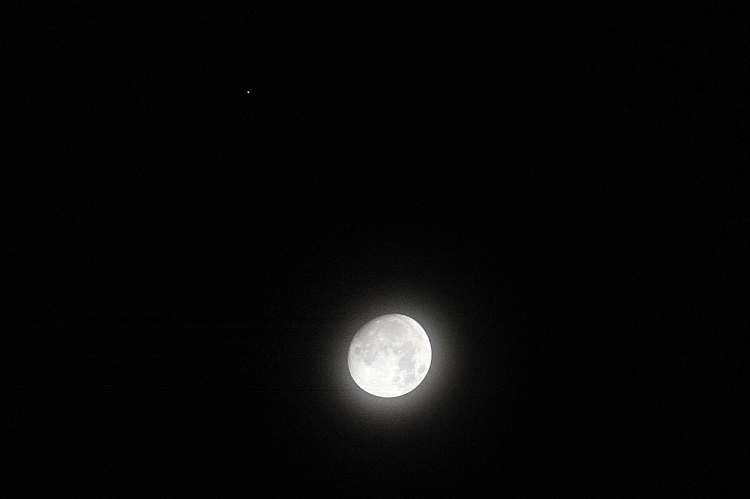 As darkness falls on catholic Christmas night 25 th of December, check out the east-southeast sky. Shining brilliantly to the upper left of the bright, near  full moon is a silvery “star” with a steady glow.

But that’s not a star, it’s the largest planet in our solar system, Jupiter, serving as a sort of holiday ornament with Earth’s nearest neighbor to cap off a year of interesting skwyatching events.

These photos where taken tonight over the skies of Podgorica capital city of Montenegro by a good friend of mine Nemanja Dabanovic.

*As it was announced earlier  :

“As viewed from the eastern and central United States, the moon and Jupiter will appear closest together during the late afternoon or early evening hours on Tuesday (Dec. 25). From New York, they’ll be closest together at 6:25 p.m. EST (2325 GMT); from Chicago, it’ll be 5:18 p.m. local time (2318 GMT).

Jupiter will appear just a bit over one-half degree from the limb of the moon. (One-half degree is roughly equal to the moon’s apparent width). In the western United States, the closest approach will come before sunset, but moon and planet will still appear to be quite close together as darkness falls. [Video: Jupiter and the Moon Converge on Christmas]

The pair will be slowly separating as Tuesday night shifts to Wednesday morning; the moon moves across the sky at roughly its own diameter each hour.

Jupiter will remain a bold light high in the east-southeast at nightfall. This week, it doesn’t set in the west until around 5 a.m. local time. Appearing brighter than any nighttime star, Jupiter is now levitating in front of the constellation Taurus (the Bull), not far from the famous V-shaped Hyades star cluster and despite the nearby presence of the orange 1st-magnitude star, Aldebaran, which fills this region of the sky with overbearing brightness.

What kind of telescopic observation can be made of the gas giant now? Almost every kind. From mid-northern latitudes you can even watch a full rotation of Jupiter, with the cloud features of every longitude displayed, during a single nightlong vigil.

And as always, a fascinating dance of Jupiter’s four large Galilean satellites will await viewers on any night who watch with a small telescope or even steadily held bi

As darkness falls over the eastern U.S. on Tuesday, you’ll see two Jupiter moons — Ganymede and Callisto— on one side of the giant planet, while a third, Europa, hovers by itself on the other side.

As the evening progresses, Ganymede and Europa will gradually pull away from Jupiter. Then, at 7:15 p.m. EST (0015 GMT Wednesday), the fourth Galilean satellite, Io, will emerge from Jupiter’s shadow and appear on the side of the planet occupied by Europa.

Slowly, as Tuesday night wears on, Io will become easier to see as it moves away from Jupiter and toward Europa. At 11:40 p.m. EST (0440 GMT Wednesday), you’ll see Io passing Europa.

And Jupiter itself will continue to be a great target throughout the entire winter season for those who got binoculars or a telescope as a holiday gift.