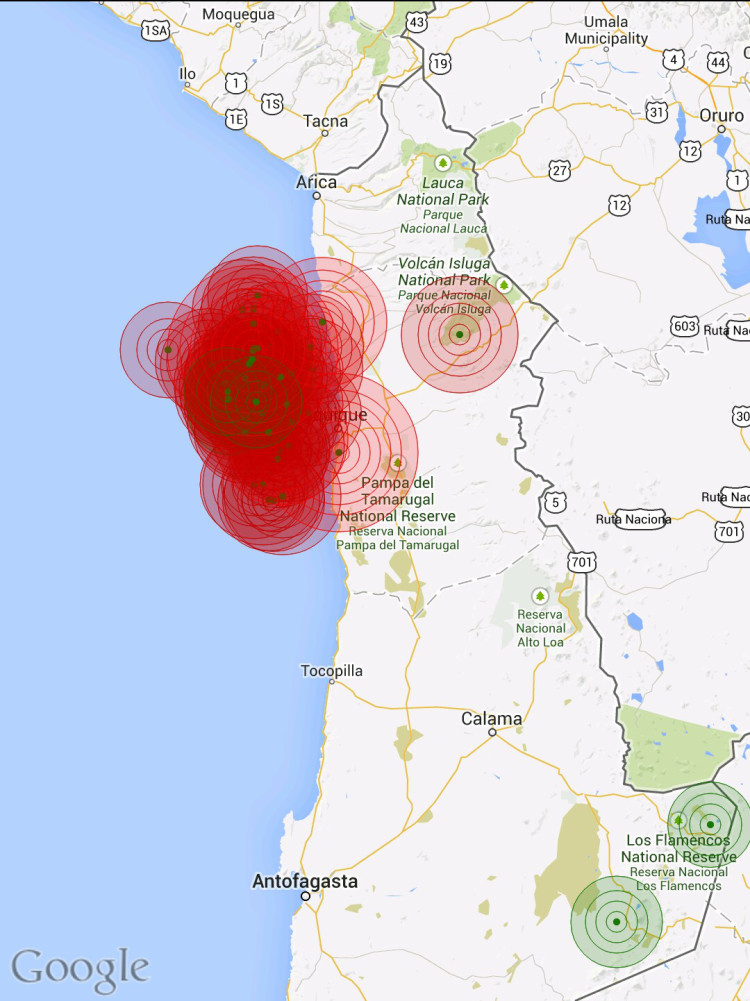 The USGS has recorded a 7.8-magnitude earthquake of the coast of Chile, just one day after an 8.3 quake rocked the coastal nation. The epicenter of the quake was 14 miles south of the port city of Iquique which also saw damage yesterday.

According to the AP, there are not yet any reports of significant injury or property damage. There is also atsunami warning in effect again, but it is not known that a tsunami has been generated — better safe than sorry.

The April 3, 2014 M 7.6 earthquake off the west coast of northern Chile occurred as a result of thrust motion at a depth of approximately 40 km, 23 km south of the city Iquique. The location and mechanism of the earthquake are consistent with slip on the plate boundary interface, or megathrust, between the Nazca and South America plates. At the latitude of the event, the Nazca plate is subducting beneath South America at a rate of ~73 mm/yr.

This earthquake is an aftershock of the M 8.2 subduction zone earthquake that occurred April 1, 2014. The M 8.2 event triggered a tsunami with measured heights near 2 meters along the northern Chile and southern Peru coasts. Since the M8.2 event, 47 aftershocks ranging from M 4.2 to this M 7.8 event have occurred, including a M 6.4 on April 2. The current seismic sequence was preceeded by a foreshock sequence that began on March 16, 2014, with a M 6.7 earthquake close to the epicenter of the April 1 M 8.2 event. This segment of the subduction zone, known as the Iquique or Northern Chile seismic gap, last ruptured during the 1877 M8.8 Iquique earthquake. Other recent large plate boundary ruptures bound the possible rupture area of the April 1 event, including the 2001 M 8.4 Peru earthquake adjacent to the south coast of Peru to the north, and the 2007 M 7.7 Tocopilla, Chile and 1995 M 8.1 Antofagasta, Chile earthquakes to the south.

The South American arc extends over 7,000 km, from the Chilean margin triple junction offshore of southern Chile to its intersection with the Panama fracture zone, offshore of the southern coast of Panama in Central America. It marks the plate boundary between the subducting Nazca plate and the South America plate, where the oceanic crust and lithosphere of the Nazca plate begin their descent into the mantle beneath South America.

The convergence associated with this subduction process is responsible for the uplift of the Andes Mountains, and for the active volcanic chain present along much of this deformation front. Relative to a fixed South America plate, the Nazca plate moves slightly north of eastwards at a rate varying from approximately 80 mm/yr in the south to approximately 65 mm/yr in the north. Although the rate of subduction varies little along the entire arc, there are complex changes in the geologic processes along the subduction zone that dramatically influence volcanic activity, crustal deformation, earthquake generation and occurrence all along the western edge of South America.

Large intermediate-depth earthquakes (those occurring between depths of approximately 70 and 300 km) are relatively limited in size and spatial extent in South America, and occur within the Nazca plate as a result of internal deformation within the subducting plate. These earthquakes generally cluster beneath northern Chile and southwestern Bolivia, and to a lesser extent beneath northern Peru and southern Ecuador, with depths between 110 and 130 km. Most of these earthquakes occur adjacent to the bend in the coastline between Peru and Chile. The most recent large intermediate-depth earthquake in this region was the 2005 M7.8 Tarapaca, Chile earthquake.

Earthquakes can also be generated to depths greater than 600 km as a result of continued internal deformation of the subducting Nazca plate. Deep-focus earthquakes in South America are not observed from a depth range of approximately 300 to 500 km. Instead, deep earthquakes in this region occur at depths of 500 to 650 km and are concentrated into two zones: one that runs beneath the Peru-Brazil border and another that extends from central Bolivia to central Argentina. These earthquakes generally do not exhibit large magnitudes. An exception to this was the 1994 Bolivian earthquake in northwestern Bolivia. This M8.2 earthquake occurred at a depth of 631 km, which was until recently the largest deep-focus earthquake instrumentally recorded (superseded in May 2013 by a M8.3 earthquake 610 km beneath the Sea of Okhotsk, Russia), and was felt widely throughout South and North America.

Subduction of the Nazca plate is geometrically complex and impacts the geology and seismicity of the western edge of South America. The intermediate-depth regions of the subducting Nazca plate can be segmented into five sections based on their angle of subduction beneath the South America plate. Three segments are characterized by steeply dipping subduction; the other two by near-horizontal subduction. The Nazca plate beneath northern Ecuador, southern Peru to northern Chile, and southern Chile descend into the mantle at angles of 25° to 30°. In contrast, the slab beneath southern Ecuador to central Peru, and under central Chile, is subducting at a shallow angle of approximately 10° or less. In these regions of “flat-slab” subduction, the Nazca plate moves horizontally for several hundred kilometers before continuing its descent into the mantle, and is shadowed by an extended zone of crustal seismicity in the overlying South America plate. Although the South America plate exhibits a chain of active volcanism resulting from the subduction and partial melting of the Nazca oceanic lithosphere along most of the arc, these regions of inferred shallow subduction correlate with an absence of volcanic activity.

Source and read more at: USGS